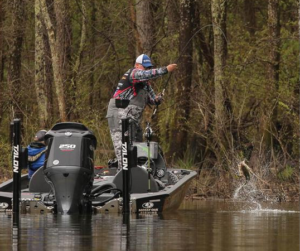 Bill Lowen had never made a 100-mile run one-way just to find the right fishing conditions, but he did it three successive days during the recent Bassmaster® Elite tournament at South Carolina’s Winyah Bay, and it nearly paid off with a victory. In three days of competition, the Yamaha Pro put more than 600 miles on his boat, the equivalent of driving a car from Atlanta to Miami.

“It was the longest run I’ve made in my career, and I was a little hesitant, but sometimes in today’s professional tournaments, especially when you’re fishing tidal water like we were, long runs are necessary,” explains Lowen. “I never had a bit of trouble with my boat or my outboard the entire week.”

Lowen led after the second day of the tournament but fell to 12th after the third day when a weather change altered his fishing location. He and several other competitors were fishing far up the Cooper River rather than staying in Winyah Bay near the city of Georgetown. Including stops to re-fuel, the 100+ mile runs took a little over two hours each way.

“Whenever I’m fishing tidal water, I try to find an area that still has deep water even at low tide, not just at high tide, and that’s what I had on the Cooper River,” continues Lowen. “The river has a completely different ecosystem than Winyah Bay, even though it’s still affected by the tide. It’s a rich environment with abundant reeds, lily pads, hydrilla, and milfoil, and historically it has produced some of the best catches in that area.

“During the first two days of the tournament, high winds kept water from receding normally during the low tide, so all the cover and vegetation where I was fishing remained underwater. The bass did not have far to move at all, but when the wind died the third day, the places I was fishing became almost dry because the outgoing tide pulled the water back out.

“Even in my best deep water areas, the water became extremely shallow because we were competing during a full moon and the tides were stronger than usual. I still managed eight or nine bites, but I lost a three pounder, which would have made a big difference for me in the final standings.”

The basic rule of tidal fishing is that when the tide comes in, fish come in with it, and when the tide goes out, fish move out with it, explains the Yamaha Pro. Many fishermen choose to follow an incoming or outgoing tide, often described as “chasing the tide,” but locating a deep water sanctuary where cover remains under water during the outgoing tide eliminates having to do this.

“On the Cooper River, my deep water areas were cuts and creek mouths near bends in the main river,” adds Lowen, “but any type of depression or depth change can be effective if it includes cover.”

Because of the wind, Lowen fished a spinnerbait during the tournament, even though he had located the bass in practice using a soft jerkbait. When the weather changed on the third day, the mood of the bass also changed. They did not hit either lure well, which is why he lost that three-pounder. He only weighed in four bass that day and missed the cut to compete the final day.

“Tidal fishing is definitely a different type of bass fishing,” smiles the Yamaha Pro. “It’s not just about moving water but also about fish that are moving, too. That’s why I look for places where the fish don’t have to move as far.

“Sometimes you have to run a long distance just to find those types of places, too, and now that I’ve made my first 100-mile runs without any problems, I won’t hesitate to do it again.”