The Scoop on Striped Bass

A cluster of small boats gather toward the end of an ebb tide on a dreary November evening in Norfolk, Virginia. Fishermen, clad in rain slickers, cast their lines toward pilings and retrieve them in silence. There’s no chatter among them – an entire day spent on the water exhausted their conversations. They’re focused on one thing – their target species, the Atlantic striped bass, though nobody’s landed one today. Suddenly, the song of a reel zings out over the rushing water as a striper is hooked and begins what might be the fight for its life. “Hooked up!” exclaims an angler, finally breaking the silence with words they all yearn to shout. The fish peels just enough line to make a beeline for a piling, wrapping the monofilament against the barnacles plastered to it like living razor blades. The line snaps, leaving the fisherman to grieve in the gloomy dusk.

For anglers across the U.S., the challenge of locating and landing stripers is what keeps them coming back for more.

“Striped bass are an elusive fish,” said Dwight Ocheltree, a striper fishing enthusiast and employee at Greg’s Bait Shack in Portsmouth, Virginia. His statement applies in more ways than one.

Striper fishermen know finding these fish isn’t always easy. Sometimes it’s a patience game of waiting for them to show up or to start feeding. Then there’s the challenge of landing one after it’s been hooked.

“Stripers love structure,” said Ocheltree. “Bridges, pilings – places they can stay out of sight and ambush their prey. Fishing around structure takes skill that comes with experience. The first thing a hooked striper will do is try to retreat behind structure, and that means breaking the line if you aren’t prepared.” 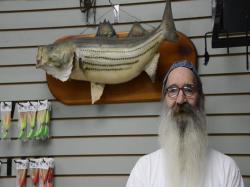 According to Ocheltree, once a fisherman lands a striper for the first time, it’s then he or she who will be hooked.

“Once you land one, you’ll be back for more,” he said. “If you’ve been trying but aren’t catching any, keep at it. Keep plugging. You’re one cast away from the best day of your life!” Anglers hoping to catch “the big one” are drawn to waters off the Mid-Atlantic coast, where laws aimed at protecting the species are different that those close to shore.

“The Atlantic striped bass is managed through the Atlantic States Marine Fisheries Commission, an interstate organization designed to ensure states along the eastern seaboard manage their shared fishery resources through cooperative stewardship,” said Patricia Bennett, deputy enforcement chief for the 5th Coast Guard District in Portsmouth. “It is illegal to possess or target the Atlantic striped bass in federal waters, which begin three miles from shore. In state waters – waters less than three miles from the coast – each state has its own laws designed to protect stripers. Even though the Coast Guard does not enforce those state laws, if we find a violation at the state level, we may notify state authorities.”

“The three-mile line is clearly marked on nautical charts,” said Master Chief Petty Officer Stephen Atchley, captain aboard Coast Guard Cutter Cochito out of Portsmouth. “With all the modern navigation equipment, it is every mariners responsibility to know where they are when they are on the water. That means knowing if you’re fishing in state or federal waters.”

“I’m a fisherman myself,” said Atchley. “I’ve fished my entire life. I want there to be fish for my family and for future generations.”

While striped bass fishermen are responsible for understanding and following both state and federal regulations, the majority of these anglers will never venture near the three mile mark, fishing closer to shore in rivers and bays.

“Some people think you need a boat to catch stripers,” said Ocheltree. “You don’t. You can catch striped bass from shore. In fact, that’s how many people prefer to fish them.”

One particular characteristic of the species helps make it the preferred target for so many. Stripers are anadromous – they’re born in fresh water, migrate to the ocean, then return to fresh water to spawn. This means anglers can catch them in rivers that run through cities – they’re a popular urban game fish. Their ability to acclimate and survive in entirely freshwater ecosystems led humans to introduce the species to completely landlocked lakes and ponds. Striped bass can be found throughout the country and are among the most targeted of all game fish.

November usually means striper season arrived here in the Mid-Atlantic. As water temperatures begin to decline, the action should increase. “If you want to catch a striper, you just have to go out and do it,” said Ocheltree. “Put in your time. Talk to other fishermen. Listen to the people at bait shops and at the boat ramps. Every year I learn something new from someone different.”