When it comes to recovering endangered Atlantic salmon, it makes a difference where smolt stocking takes place along a river. A new model can help by evaluating estimated survival of smolts released at different stocking locations. 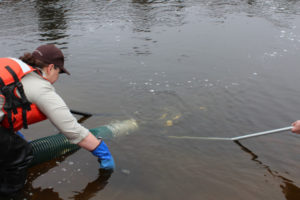 Young Atlantic salmon smolt released at lower-river stocking sites on the Penobscot River are more likely to survive and enter the ocean than those released higher in the river system. They encounter fewer barriers such as man-made dams during their migration to the estuary, and their migration path is shorter. NOAA Fisheries scientists built a model that can help select release locations to improve survival of stocked smolt as they head for the ocean.

The 2018 Northeast Fisheries Science Center study, published in the Canadian Journal of Fisheries and Aquatic Sciences, highlights the continuing challenge to conserve this endangered species.

“This model is an important tool to support decision-making for the recovery of wild, self-sustaining Atlantic salmon populations,” said Justin Stevens, a fishery biologist at the Center’s Maine Field Station in Orono and lead author of the study. “Hatchery smolt stocking is a common strategy used in the program, and now we have a way to effectively evaluate its success.”

The researchers built a model to simulate historic survival of migrating Atlantic salmon smolt at different locations along the Penobscot River from 1970 through 2012, using existing studies of smolt survival. The model assessed the relative survival risks posed by three factors: dams, discharge into the river, and the length of the migration route.

By far, the number of dams encountered during downstream migration had the biggest effect on survival. The more dams the smolts encountered, the lower the survival rate.

A number of dams have been removed from the Penobscot River in the past few years. However, more than 100 man-made dams remain. Most are relative small and used for water storage or are remnants from 19th century industrial activities.

This study focused on 18 dams commissioned to generate hydroelectric power during the study period, for which hatchery records were also available. These dams are situated along primary salmon migration paths in the five sub-basins of the river.

“The information learned from this study can be used by state and federal managers to better inform future stocking practices and to work with the hydroelectric industry to minimize the impact of dams,” said Stevens.

This study provides a quantitative way to evaluate the effect of dams on smolt survival during downstream migration in the largest U.S. Atlantic salmon river.

The model calculates marine survival, from post-smolt to adult salmon. It accounts for losses during both freshwater and estuarine migration, and is an important new tool for making decisions about habitat improvement, fishery management, and Atlantic salmon recovery activities.

Atlantic salmon smolt migrate from freshwater river habitat downstream to the ocean. Many do not survive the journey past multiple dams or their time at sea.

If they do survive, as adults they need to migrate from their time in the ocean back to the river. Adults then swim upstream past dams to spawn and complete their life cycle. Making multiple trips during their lifetime further reduces the likelihood of repeat spawners, and that negatively affects population growth.

Historically, Atlantic salmon in the United States ranged from the Housatonic River of Long Island Sound to the Aroostook River in eastern Maine. There were an estimated 500,000 adult fish in precolonial days.

Today, U.S. Atlantic salmon are limited to eastern Maine and the population numbers fewer than 2,000 adult fish. The Penobscot River supports the largest population, aided by a hatchery-smolt stocking program that produces about 75 percent of the annual adult returns.

This year has been designated as International Year of the Salmon. It is the kickoff for an international effort though 2022 to bring countries together to share knowledge, raise public awareness, and take action to conserve and recover both Pacific and Atlantic salmon.