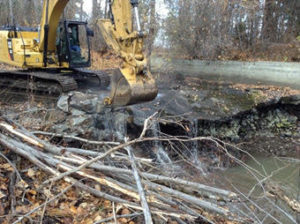 Now that diversion dam is gone, dismantled through the cooperative efforts of local irrigators, Kittitas County Conservation District, and the Yakima Basin Integrated Plan partners, Mid-Columbia steelhead, a threatened species under the Endangered Species Act (ESA), are now re-establishing themselves in more than 20 newly accessible miles of healthy creek habitat.

“By working together, creating trust and relationships among the Yakama Nation, agencies, and the irrigators, we’re really turning things around and getting fish where they need to be to recover,” said Eberhart, manager of the Kittitas Reclamation District (KRD), one of the partners in the 2016 removal of Reed Diversion Dam and restoration of the Manastash and its tributaries. “That cooperation is not only making the difference, it’s how it happened. It’s what made this progress possible.”

“The local collaboration that opened the upper reaches of the Manastash illustrates the kind of focused, coordinated efforts that federal agencies are now working to bring to bear on behalf of steelhead elsewhere in the mid-Columbia,” said Rosemary Furfey of NOAA Fisheries’ West Coast Region, chair of the Federal Caucus. The Federal Caucus is a coordinating organization of 10 federal agencies with roles in the recovery of ESA-listed salmon and steelhead in the Columbia River Basin.

The Caucus is now working to support mid-Columbia steelhead through focused federal coordination that will improve the viability of the species and move it closer to recovery. The agencies are coordinating efforts around mid-Columbia steelhead because it has shown progress over the last decade and may be approaching the point where it could be considered for removal from the list of threatened and endangered species. Much of this progress is a result of restoration efforts such as those on the Manastash.

“This is one place where if we bring people together, and really coordinate efforts, we may be able to make a real difference for this species and demonstrate success in recovering a species,” Furfey said.
.
Federal agencies active in restoring the Manastash and recovering its steelhead populations include the Bureau of Reclamation, Bonneville Power Administration (BPA), U.S. Fish and Wildlife Service, and NOAA Fisheries. Manastash Creek reaches into the Okanogan-Wenatchee National Forest and stands out among tributaries of the Yakima River because much of its watershed remains undeveloped and in public ownership.

“Our accomplishments for this steelhead species are remarkable,” said Lorri Bodi, Vice President of Environment, Fish, and Wildlife at BPA, one of the agencies helping fund the project. “Working together to remove the dam has allowed more fish to make it to their traditional spawning grounds, boosting survival, and adding fish to the river.”

Irrigators on the Manastash have worked almost since mid-Columbia steelhead were listed as threatened in 1999 to improve conditions for the fish. Although tension first prevailed as environmental groups threatened to go to court for better protection of the fish, a cooperative steering committee of irrigators, agency representatives, and other organizations began pursuing conservation improvements, such as screening of irrigation diversions that would support fish recovery while also maintaining farms and other agricultural operations across the watershed.

“This is a place that has really exemplified how far you can go when you have good backing from the community that sees the benefit in improving conditions for fish,” said Michael Tehan, Assistant Regional Administrator for the Interior Columbia Basin Office in NOAA Fisheries’ West Coast Region. “Now our challenge is to see if we can take this recipe and try to reproduce it in other basins.”

Another example of progress is the Kittitas Reclamation District’s novel use of irrigation canals and ditches to deliver water to stretches of the Manastash and its tributaries that sometimes ran dry in low-water years like this one. Water conservation measures, such as lining of canals and installation of sprinkler systems, funded in large part by BPA, National Fish and Wildlife Foundation, Bureau of Reclamation, and Washington Department of Ecology have helped free up water that can remain in the streams to support fish.

“Reclamation is pleased to be part of the team that has advanced Manastash Creek Enhancement Project which has produced such positive benefits for both steelhead, an ESA-listed species, and the agricultural community of Manastash Creek; and has made it possible to start the streamflow enhancement supplementation that KRD, Ecology, and Reclamation fully support for other creeks in the Kittitas Valley,” said Wendy Christensen, Yakima River Basin Water Enhancement Project Manager for the Bureau of Reclamation.

Federal and state agencies have invested nearly $24 million in the Manastash Creek Restoration Project since 2003. While the collective price may seem steep, Tehan said that when agencies align efforts and leverage funding, success is more likely.

For mid-Columbia steelhead, that has proven true. Biologists from the WDFW monitoring the streams with renewed water flows are finding a resurgence of streamside plants and aquatic insects that form the ecological building blocks of healthy fish habitat.

As Eberhart recounts the story of cooperation and progress on the Manastash to others around the Columbia Basin, he has fielded more requests for advice and suggestions on how to undertake similar efforts elsewhere. As climate change puts added pressure on both agriculture and fish populations to make the most of limited water supplies, he said, such conservation and cooperation will become even more important.

“We’re utilizing our canal system to carry water to places where the tributaries need help,” he said. “We’re all focusing on how to find success, and that is a win.”