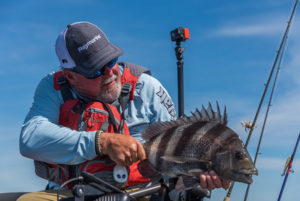 Use a skinny leader

Louisville, KY – Here’s an unfortunate fact: a lot of fish are leader-shy. Especially fish that roam shallow, clear waters and are physiologically all eyeballs. Take for instance permit and bonefish, two saltwater fish that experts agree require the assistance of a quality fluorocarbon leader.

A new fluorocarbon leader option that’s designed to fool leader-shy fish and is catching the attention of anglers nationwide is Seaguar’s Gold Label. It is the thinnest and strongest leader Seaguar makes—18% thinner with 17% better knot and tensile strength compared to other Seaguar leader material.

One expert who is familiar with Gold Label and dealing with leader-shy fish is “The Kayak Fishing Show” host Jim Sammons. Now in its tenth year of production, Sammons’ travels have taken him to waters and fish around the world.

“I’ve been using Gold Label since it was first introduced and the beauty of it is it has a smaller diameter so I get action on lures and my bait can swim that much better. The smaller the line the less resistance that lure or live bait is going to have to deal with and swim more naturally. And obviously, the more natural something looks, the better your chances of getting bit. I fish all over the world and many of those places have crystal-clear water, especially in saltwater you tend to encounter that and you need every advantage you can get. My experience with Gold Label is it increases the number of bites you get because of its smaller diameter. Fluorocarbon is already difficult to see in the water but if you can give yourself any advantage at all, like making the diameter even smaller, it’s even better. So the benefits are two-fold: the line is going to be seen less and your baits and lures just swim more naturally. And, if you can do that, you just up your chances of getting on fish,” says Sammons.

Some of the examples of where the line has excelled for Sammons are fishing in both Belize and Louisiana.

“I used it as my leader in Belize where you’ve got bonefish and permit and super clear waters where the fish can be really spooky. It made a big difference in getting those bites. Even in water that looks dirty it could be crystal-clear down below the top layer, like fishing for redfish in Louisiana where you’re sight-fishing for the fish. Just having that bait move more naturally, for me, has made a huge difference. I use Seaguar 16-strand Threadlock Hollow Core Braid and make my own wind-on leaders, so rather than having a short, four-foot leader, I can have a leader that’s 20 feet long. So, having that much distance of fluorocarbon, and that narrow diameter, it’s just less resistance for that bait to have to pull and just that much more invisible,” adds Sammons.

“One situation where Gold Label really made a difference was in Louisiana fishing redfish in really skinny, skinny water. We were standing on top of our kayaks trying to sightfish – and not only redfish but black drum, and sheepshead, which are very finicky and tough to get to bite. Nobody else was getting bit, but I was still getting bit. Another situation was also fishing redfish in some fairly dirty water and a friend of mine told me I didn’t need a fluorocarbon leader because the water was so dirty. So I tied straight to my braid but just couldn’t get bit. You don’t necessarily think about dirty water having to have a fluoro leader but it can help immensely because a lot of times there’s clear water underneath that dirty water on top. I tied on a Gold Label leader and immediately, first cast, I caught a red and after that it was constantly fish on all morning. It made that much of a difference. For people who aren’t believers in fluorocarbon, they’re just wrong.

Another bonus to Gold Label is that it has very little memory, which has made a huge difference for Sammons. “It’s all very supple when you’re casting—especially on my fly rods—so the line just lays down on the water nicely. It’s just got all the qualities you want in a high-quality fluorocarbon. And when I’m using a baitcaster or spinning gear, being able to use the combination of the Seaguar Threadlock and making those long wind-on leaders out of Gold Label, it’s just amazing.” Sammons describes Gold Label as fluorocarbon with the abrasion resistance and strength of Blue Label but the softness of Seaguar’s Fluoro Premier. It’s currently available in five versatile pound test ratings, ranging from 15 lb test to 40 lb test, on 25 yard spools.

As mentioned, Sammons is the host of “The Kayak Fishing Show” on the World Fishing Network, a show whose premise is to travel the world and catch the biggest fish possible from kayaks while also casting a spotlight on the interesting people and cultural experiences along the way. He mentions how critical of a part the line actually plays in producing compelling TV content.

“When you’re shooting a show, you need those fish on camera and the best chance to land fish for the show. I’ve been using Seaguar forever for that very reason—it makes what I do much easier.”

He continues: “It’s so easy for me to promote a product that I believe in. And I’ve been using Seaguar since long before I had a TV show. It’s something I really believe in.”