Editor’s Note: In many states, it’s been a long, uphill battle to convince anglers to release fish so that more can reach larger sizes. But in certain types of habitat-smaller waters with average low temperatures and minimal food production-the only way to get more big fish is to harvest lots of small fish, thus leaving more food for the survivors. Utah is currently working towards this type of a solution for many of their waters. Here’s the story, from the UDWR.

Wildlife Board approves rule changes for 2015 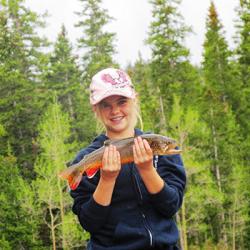 you should keep fish in some cases

Keeping the fish you catch – up to your legal limit – is the key to providing fish with the food they need to grow.
Photo by Richard Hepworth

“A chance to catch a larger fish is the number one thing active Utah anglers have told us they want,” says Drew Cushing, warm water sport fisheries coordinator for the Division of Wildlife Resources. “Unfortunately, at many of the state’s waters, anglers are releasing too many fish. If they’ll start keeping fish, up to their legal limit, the growth rate of the remaining fish should improve.”

Cushing says when a water has too many fish in it, the fish run out of food. And that limits how big each fish can grow. “In addition to helping the fish population,” Cushing says, “keeping fish will add something to your diet that’s extremely healthy and good to eat.”

To encourage anglers to keep more fish, the Wildlife Board recently approved several rule changes for the 2015 season. The changes take effect Jan. 1, 2015.

You can see all of the changes the board approved in the 2015 Utah Fishing Guidebook. The free guidebook should be available online by early November.

Members of the board hope eliminating the ‘home’ possession limit-the number of fish an angler can have in his or her freezer at home-will help anglers develop a new ‘mindset’ that encourages them to keep more fish.

A creel survey, which measures the number of fish anglers keep, was completed at Willard Bay Reservoir in 2011. A similar survey will wrap up at Starvation Reservoir this fall. The DWR will conduct creel surveys at both waters in 2015. Results of the earlier surveys will then be compared with results of the 2015 surveys to see if eliminating the possession limit made a difference in the number of fish anglers kept.

The board also approved a DWR recommendation to eliminate the daily yellow perch limit at Fish Lake.

“In surveys,” Cushing says, “anglers have indicated that the number one reason they go to Fish Lake is to catch big lake trout. Right now, the yellow perch population in the lake is so large that trying to introduce a species for lake trout to feed on isn’t going to work.”

Cushing says reducing the number of yellow perch will increase the amount of zooplankton available for other species to eat, including kokanee salmon that biologists want to introduce to the lake. A self-sustaining population of kokanee salmon would provide an excellent food source for lake trout in the lake.

The idea to eliminate the yellow perch limit originated with an advisory group of anglers assembled by the DWR.

The board also approved a recommendation to increase the daily brook trout limit at Oak Creek Reservoir, one of 80 lakes and reservoirs on the Boulder Mountains in southern Utah.

“The reservoir has an increasing population of brook trout, and fish are growing much slower,” Cushing says. “The fish are not getting as big. When the limit increases on Jan. 1, we hope anglers will take advantage of the increased limit and remove some additional fish. If they don’t remove enough fish, we’ll have to chemically treat the reservoir and then restock it with sterile brook trout that can’t reproduce.”

An advisory group of anglers who enjoy fishing on the Boulder Mountains helped the DWR draft the proposal the board approved.