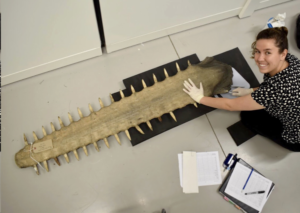 Not only the most distinctive feature of a sawfish, the rostrum (saw) also contains vital information.

“SawSearch” has taken researchers Kelcee Smith, from Louisiana State University, and Annmarie Fearing and Dr. Nicole Phillips, from The University of Southern Mississippi, to all corners of the U.S. in the search of old sawfish saws over the past five years. Last June, with support from the Shark Conservation Fund and The Curtis and Edith Munson Foundation, this research led them all the way to the United Kingdom. SawSearch is a global initiative to find, photograph, measure, and collect tissue samples from old sawfish saws. Phillips, Fearing, and Smith are extracting DNA from the tissue samples they collect, using the data to assess the relative health of remaining sawfish populations. The DNA from the old saws provides the researchers with baseline information of what sawfish populations were like before they were heavily exploited, which can then be compared to DNA from the sawfish populations of today.

SawSearch UK might sound like a leisurely holiday, but most of their time in the UK was spent working in the basements of museums, entering data, riding trains, hauling equipment from city to city, and conducting outreach events. After a year of intense planning, the team spent a total of 30 days in the UK, travelled ~12,000 miles, visited 31 collections, collected data and samples from 528 sawfish specimens, and held 11 outreach events. The rewards of the long days of sampling and travelling came with each collection visited, every specimen pulled from a drawer, and every museum curator they met along the way.

Museums play a critical role in all SawSearch expeditions by preserving natural history specimens and revealing the unique stories behind them in their data archives. The people behind these collections, the curators, conservators, and collections managers, dedicate their time to the maintenance of these collections for decades. “We were enthusiastically welcomed into every collection we visited during SawSearch UK and everyone was so excited about our project. After long days sampling, traveling, and conducting outreach, these interactions with the museum staff really kept our energy up,” says Fearing. “During our visits, they went above and beyond by helping us take photographs, record data, searching for extra information, and even connecting us with other curators to help us find more saws. I don’t think there was a museum curator that didn’t offer us tea as soon as we arrived, even though it was 80 degrees outside. They put kindness first and I’ll never forget that,” says Smith. The team also used each visit to a museum as an opportunity to connect with the public, teaching them about sawfish and the importance of natural history collections. They often set up a table right in the middle of museum galleries, answering questions about sawfish while collecting tissue samples from the saws. “Making that connection between museums, the public, and research is one of the greatest things about SawSearch. It’s my favorite part and I know Nicole and Annmarie love it too,” says Smith.

In addition to the museums and universities the research team visited, they were also able to find a few saws at some not-so-traditional venues. During their stay in Edinburgh, Scotland, Fearing and Smith discovered a saw in an unexpected place, at a fish and chips shop across the road from their hotel. “As we walked passed a fish and chip shop, I heard Kelcee gasp and then felt her yank me backwards.” says Fearing. “She told me to look inside the fish and chip shop and there, hanging on the wall, was a green sawfish saw.” The next day, they went into the restaurant to talk to the owner, explaining how they had traveled all the way from the U.S. to sample saws just like the one he had on his restaurant wall. The owner was perplexed, but kind, and allowed them to collect a sample; excited to tell the story of how he got the saw and intrigued that it could be used in scientific research. “I mean really, what are the chances that we would find a saw across the street from the hotel? Sawfish aren’t native to the U.K.,” exclaims Smith.

One pervasive idea that the researchers came across was that if specimens do not have location data, they are not useful in research. “These saws are valuable to us and there is a longer-term vision for this initiative. The goal looking forward is to be able to take a tissue sample from a sawfish from an unknown location and be able to determine where that animal came from. Such a tool could be used for enforcement purposes, to improve our knowledge of historic sawfish populations and understand how they have changed over time, ultimately translating this data into more effective conservation strategies to promote recovery” says Phillips. “Not only are sawfish saws without location information still valuable, I hope to go back to these curators one day and tell them where these specimens most likely came from”. “One curator was so happy when we told her specimens without location data are still valuable. She had been keeping these saws in hopes that one day someone could potentially use them and was relieved that she had been keeping them in the collection for a reason. Moments like these are one of my favorite parts of using collections for this project,” says Fearing.

You can help! If you own a sawfish rostrum and are willing to donate a small sample for this important research or have seen one somewhere, please call 1-844-4-SAWFISH or email n.phillips@usm.edu.