SAYING GOODBYE To President George HW Bush
Today’s feature comes to us from The Outdoor Wire, our parent publication and her publisher/editor
Jim Shepherd from The Fishing Wire 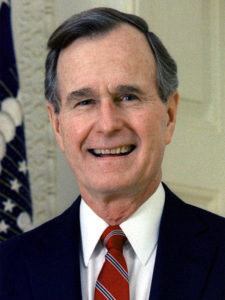 George H.W. Bush
Later this morning, the nation will say goodbye to former President of the United States George Herbert Walker Bush. With his death, we lose another member of what has been referred to as our “greatest generation” those World War II veterans who not only fought a global war, they came home and built what has arguably been one of the greatest nations in history.

With Mr. Bush’s passing, we also lose an advocate for the vigorous life of an outdoorsman. Bush, even in his later years, loved the outdoors, and many of the tributes paid to him over the past few days include recollections of trips with him to hunt or fish. Earlier this year, when fly fishing legend Bernard “Lefty” Kreh’s estate offered many of his mementoes at auction, one of the items included a handwritten note from Bush, thanking Kreh for a “great time fishing” with Mr. Bush. It also admonished Kreh not to “laugh at the picture of this amateur flyfisherman.”

The note and its admonition demonstrated two of Mr. Bush’s best qualities: valuing the worth of others, and a healthy ability to laugh at himself. After all, he used to recall that his mother had raised him not to have “big I” problems- to value others more than himself.

That servant’s nature was demonstrated by a life of service and focus on others, from being nation’s youngest naval aviator in World War II to penning a heartfelt note to an incoming President Bill Clinton who had defeated him – handily- in the elections. To Clinton, Mr. Bush wrote “I’m pulling for you” -and pledged his full support. It’s no surprise the two later became close friends. As Clinton explained, “He befriended me,” going on to say that he considered their friendship “one of the great joys of my life.”

Even as President, Bush worried about others. In fact, during a broadcast discussing the Bush legacy, my former colleague Bernard Shaw, recounted how Mr. Bush was concerned for his safety during Shaw’s life reporting from Iraq during Operation Desert Storm. After his return home, Bush invited Shaw to the White House, where Mr. Bush told him “Bernie, we were really worried about you.”

Bush’s handling of that war was widely criticized at the time. Today, his handling of that conflict and the collapse of the Soviet Union have led some historians to say he will likely be considered the nation’s finest one-term president.

Hs passing saddens many of us old enough to remember a younger, more vibrant Vice President Bush and his boss, Ronald Reagan. Being pretty new to the national news media at the time, I didn’t fully appreciate the unprecedented cooperation between political opponents.

Today, we lose one of those vital links to a scarce commodity between politicians: civil discourse and a desire to achieve the greater good.

As an industry, we should mourn the passage of our forty-first president because he, like the rest of his generation, realized the connections between man and nature. He was an outdoorsman and understood the circle of life.

Mr. Bush lived through adversity, from World War II to the tragic loss of a child, but accepted it all without bitterness as a part of the process of living life to one’s potential. He kept going without losing his belief in man’s ability – and responsibility – to do good.

On Monday, during a rare display of unity as political leaders came together to pay their respects to Mr. Bush, crowds gathered outside the capital rotunda where his casket will lie in state until this morning’s services. There, a 62-year old man who described himself as a lifelong Democrat explained standing outside in the cold as a way to pay his respects to a man “who gave his life in the service to the country,who did a lot of good things, but was a humble, caring person.”

A lady from Vermont said she was there because Mr. Bush represented an era where people “did the right thing and you care about America and that comes first.”

“I think maybe people need to start thinking about that a bit more,” she told CNN, “following that set of values, not fighting with each other, agreeing to disagree, doing what we’re supposed to do, take care of each other…not be at odds with each other all the time.

“Our country needs to come together,” she said, Regardless of what your political views are, I think everybody at heart wants to our country do well.”

This morning, as the nation prepares its final goodbyes to George H.W. Bush, I believe her outlook would have Mr. Bush’s wholehearted support.