By Yakima Baits Pro Buzz Ramsey
from The Fishing Wire 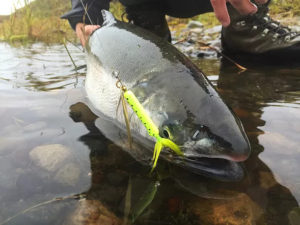 Although the timing varies by region and river system, this is the month many Northwest, BC, Alaskan and Great Lake anglers start thinking about targeting coho salmon as they begin their run toward the river habitat or hatchery that produced them. (Scott Haugen Photo)

Coho, sometimes called silver salmon, average seven to nine pounds in size with some strains reaching 15 pounds or more. In all regions, any coho salmon that weighs in at 20 pounds or more is considered a lifetime trophy. The current world record sport caught coho salmon was taken in 1989 from, surprisingly, the Salmon River in New York State at 33 pounds 4 ounces. In 2012 a coho salmon was caught-and-released from the same New York river that (based on measurements prior to release) might have weighed in at 34 pounds.

And while coho can be caught any number of ways when returning to their natal stream, casting weighted spinners is one fishing method seldom overlooked by anglers.

The most common way to fish a spinner in rivers is to cast out, across and slightly upstream and reel it back to you with a retrieve speed that keeps it working near bottom. If the water is deep, you should allow your spinner sink near bottom before starting your retrieve. Fished this way, the river current will swing your spinner downstream through the fish-holding water. Once your spinner swings in near shore, it’s time to reel in and cast again.

You’ll be much more successful if you don’t get caught up in a steady, ridged, retrieve mode. Let your spinner work with the current. For example, if you feel a burst of water grab your lure, slow down or momentarily stop retrieving and let it work. Spinners are the most effective when slowly retrieved, as slow as you can, and within a foot or two of the bottom. Strikes are usually definite, but some fish will just stop the spinning blade so, if in doubt, set the hook.

In extreme clear water, where upstream-looking fish might spook when seeing you, upstream casting can be the “go to” spinner method. Easy, position yourself within casting range of the fish-holding water and cast at an upstream angle. If the water is shallow, begin your retrieve as or just before your spinner hits the water, which can help you avoid hang ups.

After an upstream cast, especially when the water is shallow, reel fast as possible until you’ve picked up all slack line and begin to feel the resistance of the spinning blade; then slow down your retrieve speed and work your lure just above bottom.

Another productive technique is downstream casting, which works best on wide holes or tail-outs. Cast your spinner out, across and at a downstream angle. Since, the current is moving away from you, it requires a slow or no retrieve, as your spinner swings through the holding water.

When the fish are in, confirmed by vast numbers visible in clear water or due to them sometimes jumping, you may think a fast limit is a sure thing. And while you may quickly tag out (and I hope you do) realize that these fish can be finicky about what spinner size, style and color they’ll respond to. Coho salmon are famous for sometimes turning up their nose at nearly every offering but then going crazy (as in a fish-feeding frenzy) after only one cast with the right lure or color. My advice: try different offerings and let the fish tell you what they like.

Try Tipping: while tipping is a common practice among bass and walleye anglers, the trick is often overlooked by those chasing salmon. With spinners, what works is to tip the hook of your spinner with a short section (a one inch piece might be all you need) pinched from a scent-filled worm – like a PowerBait or Gulp! worm. And while different worm colors can work, what often adds to success is to hang a one-inch section of a worm in fluorescent pink from your hook – just let it hang straight back.

Spinners are available in an amazing array of weights, sizes and colors. For coho salmon, the most popular weights include the one quarter, one-third (3/8) and one-half ounce sizes – it all depends on water depth and fish preference. Some of the popular names include the Flash Glo and Rooster Tail. If you’re on a budget consider the Bud’s spinner. Keep in mind that regulations might require the use of a single, rather than a treble hook, when fishing salmon in freshwater rivers.

Although salmon will respond to solid metal finishes like nickel, brass or copper, coho may prefer lures featuring a combination of color and reflective metal. Spinners having fluorescent chartreuse, pink, green, blue, black, orange or red added to their makeup should be included in your arsenal. Remember, these fish can be fickle as the stock market so take along a wide assortment of different spinners, sizes and colors.

While both bait cast and spinning rod and reel outfits work, many anglers (including me) prefer to use a spinning rod and reel when tossing blades. The reason: spinning reels facilitate the casting of sometimes light-weight spinner sizes and, at least for me, better deal with the fast starts, stops, slow downs, and speed ups associated with fishing a spinner.

When it comes to fishing rods, eight and a half to nine foot rods in medium to medium-heavy actions are the most popular for spinner casting. Most anglers will combine these with medium size spinning reels capable of holding 140 yards of 10 to 14 pound monofilament line.

Likely due to a spinner’s sonic vibration, coho salmon respond to spinners by striking them savagely. Their built-in weight makes spinner casting easy while their vibration-producing blades attract fish in waters ranging from stagnant to fast moving. In short, the right spinner style and color will produce almost anywhere coho salmon hold.