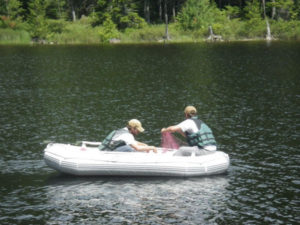 The Department of Inland Fisheries and Wildlife Fisheries Division Native Fish Conservation Group completed another successful and perhaps the last summer of remote pond surveys in 2018.

Since 2011, MDIFW has teamed with volunteer anglers from Trout Unlimited and Maine Audubon to systematically survey pond habitats in Maine that had never been surveyed to assess fish community structure, determine basic water quality or aquatic habitat condition. When the effort began, almost 600 presumed ponds were identified from maps as having never been surveyed, but ‘the list’ was eventually pared down to 533 mapped features more indicative of ponds.

The Remote Pond Survey was set up as a two-step process – first, volunteer anglers with Maine Audubon and Trout Unlimited would visit a pond and by following a protocol established by all three partners (IFW, MA, TU) would record valuable information regarding how to access these remote ponds and also provide information on their fishing, such as species caught or detected, evidence of fishing activity occurring at the pond, and observations regarding habitat condition and water quality. 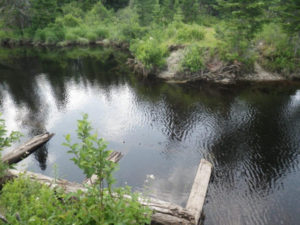 The remains of an old log driving structure on the outlet of Little Bog Pond.

These results provided by anglers contributed to waters being ranked for their likelihood of having wild brook trout populations or being coldwater fish habitat (Table 1) so that IFW biologists could concentrate our efforts on surveying waters that held the most promise for adding additional wild brook trout populations and their habitats to our roster of surveyed waters. The waters that IFW staff survey through a standard protocol estimates fish community structure, develops a basic map of the habitat, estimates pond depth and bathymetry, and measures basic water quality is phase 2 of the process.

Over seven years of effort, the volunteer survey ranked about 460 of the initial 533 remote presumed ponds with a Priority Code and referred that list to MDIFW for potential further action. Since 2012, MDIFW Fishery Biologists have been surveying remote ponds with Priority Codes of 1, 2 or 3. Although a large portion of this effort has been conducted by the Department’s native fish conservation group based in Bangor, regional staff have also conducted a fair share of these surveys and have assisted the Department’s native fish conservation group on occasion over the years. 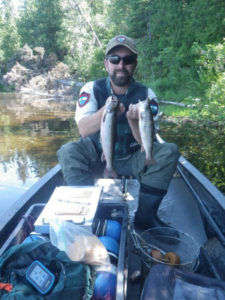 For the 2018 summer field season, the Department’s native fish conservation group staff conducted 46 remote pond surveys and we have added survey information to MDIFW databases for 196 waters total, of which 95 support previously undocumented populations of wild brook trout, since this effort began. We are thrilled to report that all ponds with a Priority Code of 1 or 2 are now completed and of the ponds remaining on the list, some are scheduled for survey in upcoming years by regional staff, most are ranked with Priority Codes of 4 or 5 and therefore do not likely warrant further effort, and less than 10 ponds with a Priority Code of 3 remain for consideration of future effort.

This has been a very large and dedicated effort by many! It was a monumental task to whittle a list of 533 unsurveyed presumed remote ponds down to a handful remaining in less than ten years. Without the dedication from the many volunteers, MA and TU, IFW staff and leadership, we would not be here today with a now largely completed Remote Pond Survey. Well done all!

Table 1. Priority Codes given to remote ponds based on Volunteer Angler Survey results
1 BKT caught by volunteer or present based on credible evidence
2 BKT possible, unconfirmed report, good water or habitat quality, etc.
3 BKT somewhat possible but not as likely as a Priority 2
4 Little to no expectation of finding BKT
5 Most likely will not be visited because of poor habitat, water quality, etc 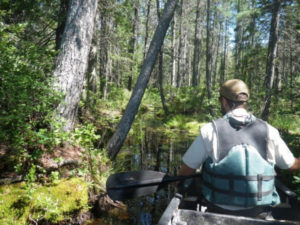 Assessing the condition of an inlet to Little Mucalsea Pond as part of our standard pond survey protocol.