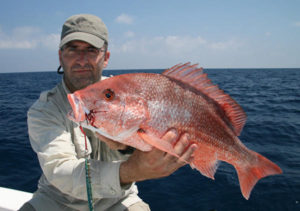 The author nabbed this chunky snapper during a Gulf of Mexico reef trip.?
Knowing what’s down there maximizes fishing time

By David A. Brown
from The Fishing Wire

It’s the sea’s food court; a place where a diverse array of patrons find an equally diverse meal menu. We’re talking about reefs; those of natural or manmade design provide shelter for baitfish and prime feeding opportunities for progressively larger predators, many of which rank high in the metrics of the sport and table fare.

Popular species include pelagics such as kingfish, tuna, wahoo and sailfish. But while these fast movers typically pay only short visits, the stars of the show are the home bodies that spend most of their lives in and around reef structures. Topping the list — grouper and snapper.

The food dynamics of the reef habitat are what holds sportfish in the area. (Photo courtesy of St. Croix Rod)
Mutton Snapper: These beautiful and aggressive fish tend to hold over sand on a reef’s exterior, so well-defined bottom readings give Mitchell a road map for where to present his baits.

“We like to drag baits with heavy leads and long leaders,” he says. “So knowing where the outer edge of that reef is lets me know where I need to drop those baits.”

Yellowtail Snapper: “When we fish for yellowtail in The Keys and off Stuart and Palm Beach, we like to get them off the reef,” says Mitchell. “You gotta work that current and the wind to get your boat backed in so your chum feeds down into that reef to pull some of those fish up to the boat.

“Yellowtail will gather into a big ball off the reef. On your sonar screen, you’ll see a red ball about the size of a quarter or 50 cent piece. Right when I see that on my Raymarine unit, I’ll turn and go up-current and set up so I’m not right on top of the fish. Then, we’ll start our chum so it slides back to the fish.”

Red Snapper: Bold and voracious, these ruby-scaled treats closely relate to structure; and it doesn’t have to be something as large and obvious as a Northern Gulf of Mexico drilling rig. Often, red snapper hover above isolated patches of reef or small rocky outcroppings. Pinpointing these spots has always been one of Mitchell’s objectives, but he shares a serendipitous revelation that deepened his appreciation for the clarity and definition of Raymarine’s CHIRP sonar.

“You’re going to need to be in some type of area with an ecosystem that gives those fish a reason to be there,” Mitchell said of a reef’s inherent drawing power. “Your bottom machines are your eyes for the depths where you’re fishing. If you didn’t have that, you’re guessing and it’s a big ocean out there. If I can’t narrow down and know what’s underneath me, I’m just hunting and pecking.”

DIAL IN YOUR SPOTS

No doubt, identifying these lively areas promotes time-management and enhances the value of invested time and resources. Just consider that not all reef life is a welcome sight. Maybe they’re out of season, or just notorious time-waster species you don’t want; Raymarine’s incredible clarity and target separation will show you what’s down there so you can best manage your efforts and expectations.

“You have to be careful that the spot isn’t covered up with amberjack, sharks, or things you don’t want to be a part of,” Mitchell says. “Raymarine’s DownVision is getting so detailed and sophisticated that you can actually see a ledge with fish under it.

To keep his day efficient, Mitchell typically sets up a milk run of known waypoints, all within a mile or two. Bouncing back and forth between a handful of sites within a mile or two allows him to let a productive spot rest, while also sampling others in close proximity.

“You have to narrow it down and your Raymarine units can help you do that,” Mitchell said. “On top of that, I’ve found some of these places by accident. Maybe I’m running out of Jupiter Inlet at 40 mph and all of a sudden, I see my machine spike up.

“I’ll whip it back around and go over my track and I’ll find a spot that maybe people haven’t been fishing for a while and it’s loaded. You find spots like that because of the Raymarine technology that we have on the boat, you can run at 40 mph and still pick up bottom that’s showing you a good enough mark to let you know there might be something there worth fishing.”

When your favorite species isn’t cooperating, the season’s closed, or maybe you’ve just capped your limit; don’t despair, reefs offer a bountiful array of B-Teamers who are usually more than willing to step and take a few reps.

Grunts — mostly white grunts and margates. Side by side with mangrove snapper filets, most would have a tough time distinguishing. Scaled-down slip sinker rigs, knocker rigs and jigs tipped with squid.

Triggerfish — This tasty fish’s name comes from its curious design, which finds a rigid anterior dorsal spine standing immovable until a smaller spine is pressed forward to “trigger” the latter’s collapse.

Seabass — One of the most highly valued of the alternative species, this one falls for jigs tipped with cut bait.

A popular option for smaller reef species, the chicken rig leverages the inherent feeding competition among reef fish, especially these alternative species. Essentially a set of two to three dropper loops with 12-18 inches of leader below for sinker attachment. (A simpler option: Buy a heavy sabiki rig, clip off the bottom two or three branches and leave two to three hooks intact.)

Whatever style of multi-hook rig you use, don’t overdo it on the bait. You don’t want whole sardines or the fist-sized chunks of squid you may drop on traditional grouper rigs; rather, small thumbnail sized cuts of shrimp, squid, or clam.

With any reef scenario, the abundance of life can foster an ill-conceived notion of automatic cooler filling. There’s nothing wrong with keeping legal catches for dinner, but know the regulations (size, season, daily bag limits) and practice careful catch and release for the non-keepers. Let the reef reload, rest and reset the clock for your next visit and hopefully, your Raymarine screen will light up with another stacked show of fish.