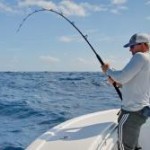 Protect yourself while catching fish

For millions of Americans, there is no place they would rather be than on the water enjoying the boating experience. Whether you are water skiing, fishing or just enjoying time with friends on a beautiful sunny day, being on the water is an extremely popular form of recreation. As with any outdoor activity, there are precautions that should be considered, and not all of them revolve around the safety equipment or the safe operation of your vessel. Everyone who spends a lot of time on the water shares a concern about exposure to the sun and, without taking the proper precautions, there is potential of falling victim to a number of health problems that can arise as a result.

The sun contains beneficial rays that enhance the body’s natural production of vitamin D, but it also bombards us with potentially harmful ultraviolet rays. The sun is a huge nuclear furnace, 840,000 miles in diameter, that the earth orbits at what would seem a safe distance of 90 million miles. However, the fusion reaction that powers the sun and provides life-giving light and warmth to our water planet also emits UVA and UVB rays that take a mere eight minutes to reach earth. In excess, these rays can be damaging to your skin and eyes.

How prevalent are sun-related health risks? According to the American Cancer Society, between 800,000 and 1 million new cases of skin cancer will be diagnosed in the United States alone this year, and more than 80 percent are directly related to sun exposure. That means that the overwhelming majority of skin cancer cases could have been prevented by taking simple precautions to reduce excessive exposure. And, as you will see, a good deal of sun-related skin damage is done at an early age, but shows up later in life, so children and teenagers should take these precautions very seriously.

Your Skin, Eyes and the Sun

The largest organ in your body isn’t your brain, your liver or stomach-it’s your skin. It is comprised of three layers, billions of cells, and accounts for about 16 percent of your total body weight. If you scratch your leg, you probably brushed off a hundred thousand skin cells, yet there are plenty in reserve as new skin cells are constantly generated by your body as old ones are lost. UVA and UVB radiation from the sun penetrates the outer layer of skin and can disrupt this natural cycle by damaging the cell producing collagen beneath. It can change cellular DNA, potentially causing it to mutate into cancer cells. It is estimated that just two severe sunburns before the age of 18 can dramatically increase a person’s chance of developing skin cancer later in life. There are three forms of skin cancer: basal and squamous cell carcinomas and melanoma, the most serious form. All three forms have been increasing over the last 50 years, which could be an indication of better screening practices as more people become aware of minor changes to their skin like the appearance of dry patches, moles or freckling. But prevention trumps treatment.

It’s not just your skin that can suffer negative effects of over-exposure to UV radiation. Studies have shown that sun exposure greatly increases the chance of developing cataracts in your eyes. More recent studies link summer sun exposure at an early age to an increased incidence of macular degeneration in adults. Much like skin cancer, eye damage can be averted by taking simple precautions, in this case wearing sunglasses that prevent UVA and UVB radiation from passing through the lenses and into your eyes. This precaution is important for everyone, but especially for children and teenagers. Undetected sun damage early in life leads to vision degeneration at later ages.

Advice from a Pro Fisherman

Mark Krowka is a legendary Florida Keys flats fishing guide who has spent thousands of days on the water with charters and in tournaments over the last 30 years. He lives and fishes in the southernmost latitudes of the United States where the sun is intense year round. He started his career at a time when little was known about sun exposure and its relationship to skin cancer, and has suffered the consequences.

“Through my childhood and my early years of fishing, before I became a professional, no one talked about sun exposure or skin cancer. So long days were spent in the sun unprotected,” said Krowka. “I can remember getting sun poisoning after a bad sunburn with the equivalent of first degree burns on my feet. I started fishing professionally in 1977, and that only increased my time on the flats where the sun is even more intense because it reflects off the water and hits you from above and below.

“Over the years, I have had about 30 squamous cell carcinomas burned off my body by doctors, but it was a basal cell carcinoma on my nose that really got my attention. I noticed just the tiniest bit of blood on my towel after showering and decided to have it checked out. It turned out that the tumor had grown down into my nose and it had to be removed, which required reconstructive surgery and a lot of pain. After that I changed the way I approached being in the sun.”

Mark started wearing long-sleeve, hooded tee shirts and used paper clips to cinch them tight above his glasses. He wore long hats and bandanas over his nose, long pants, socks and shoes.

“In a sun intensive place like the Keys, I wouldn’t trust just sun screen for as much as I am out there,” he advised.

A T-Top can also help keep skin away from the sun, at least during the runs in and out to fishing spots.
Today, covering up is a little easier with a host of new clothing products. For head protection there are buffs, a balaclava head covering of light material treated to block UVA and UVB rays that covers your head, face, ears and neck. There are gloves made of the same fabric to keep the backs of your hands protected. Tropical shirts and pants are available in breathable, sun-blocking fabrics.

For more casual sun worshippers, boaters and anglers or those who live and play in slightly more northern latitudes, there are all types of sunscreen products, but you should use one that has an adequate SPF-rating for the region. Make sure the bottle clearly states it reduces or blocks both UVA and UVB rays. Clothing remains the ultimate protection, and don’t forget good polarized sunglasses that blocks ultraviolet sunlight.

Boating and being in the sun go hand-in-hand, but you should know the facts about over-exposure and protect yourself accordingly. In this case, the old adage about an ounce of prevention has never been more true.

Capt. Mark Krowka is still at the top of his game with hundreds of tournament wins and records set by his clients and can be reached at marseas2@aol.com or by calling (305) 664-5437.