A Visit to New York’s Finger Lakes Country
By Frank Sargeant, Editor
from the Fishing Wire

Fall is a great time to be in Upstate New York. The cool breezes are blowing off the giant lakes, the leaves are turning, and the yard-long salmon and steelhead are pushing out of the open water and up into the tributary rivers where they provide some amazing action and draw some amazing crowds.

If that’s not enough, 40-inch muskies are coming out of their summer doldrums, and smallmouth bass are stuffing themselves into football proportions prior to getting iced in for the winter.

I had the opportunity to make a brief tour through the area thanks to an invitation from the Western New York Regional Development Council and Buffalo-based Hart Hotels to take a look at a public/private partnership being touted as a way to bring economic development, including recreational fishing and boating jobs as well as tourism, to the less-developed areas of the state. Over a week’s visit, we toured three prime fishing/tourism locations. Today, we have a look at Watkins Glen and the Seneca Lake region, southwest of Syracuse.

Watkins Glen, located on the south end of Seneca Lake, is part of the Finger Lake Country, a bear-claw scratch deep into the rolling hardwood terrain. There are lakes everywhere in this country, and most of them are stiff with fish. I met with guide Mark Moskal here, who operates not only a guide service but also a kayak rental operation on Seneca.

“We depend on visitors here for our income about 8 months a year,” he told me. “When the tourists leave in November, I look for odd jobs until spring—the hotel operation has been huge for us at bringing in more customers.”

Moskal works not only Seneca but also Cuyuga, Owasco, Waneta and Keuka lakes and the streams that feed them, depending on what’s biting where.

“Come at the right time and you can choose between brown and rainbow trout, lake trout, Atlantic salmon, muskies, smallmouth, largemouth and walleye,” says Moskal. “There’s outstanding fishing for all of them within 20 miles of Watkins Glen.”

He said one of his favorite fisheries occurs in October when Atlantic salmon and lunker browns run out of Cuyuga Lake into the Fall River, offering fly-rodders a shot at athletic, leg-long fish in some of the prettiest surroundings of the area, including a 100-foot waterfall that terminates their upstream journey just below the campus of Cornell University.

Muskie fishing is also impressive here—many anglers have fished for them for years without putting one in the boat, but Moskal says if you visit at prime time—late fall—on Lake Waneta, a heavily stocked 3-mile-long impoundment just west of town, you’re highly likely to get at least one fish in for a hero photo, and many are better than 40 inches long, a few over 50 inches. 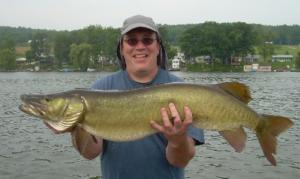 Monster muskies like this one are part of the angling action in the Finger Lakes Region, particularly on Lake Waneta, which is heavily stocked with the predatory pike. (Mark Moskal Photo)

“We get most of the fish trolling—we put out a spread of Rapala X-Raps, Williams Wobblers and Evil Eye Spoons, spacing them at 6 feet, 8 feet, 10 feet and 12 feet, and pull them fast enough to bring out a strong vibration. It’s a very dependable way to fish, and it doesn’t require the angler to fling those huge lures for hours.”

He said trolling is also the preferred tactic for lakers in Seneca, which typically hang at 70 feet and more and are reached via downrigger gear–the fish average 5 to 8 pounds, but 15 pounders are possible.

Watkins Glen Harbor Hotel here is a big part of bringing not only anglers and boaters but travelers of all interests to the Finger Lakes. The upscale 104-room hostelry, recently voted one of the top waterfront hotels in the nation by USA Today, sits at the southern tip of Lake Seneca, with al fresco dining overlooking the city harbor. It’s got all the usual amenities including an exercise room, indoor pool and a business center where road warriors will appreciate the jumbo iMac all-in-one computers.

Watkins Glen Harbor Hotel is the result of a public/private partnership that helped bring the upscale facility to a small upstate town where jobs are at a premium. The result is a great spot for anglers, boaters and tourists to hang their hat, as well as a big boost for the local economy.

The world-class (but pricey) Blue Pointe Restaurant offers an impressive variety–as an old waterfowler, I enjoyed the duck with andouille sausage risotto. The miso glazed salmon was also particularly good, all washed down with some good wine that not too long ago had been inside grapes growing on the surrounding hills—the area is famed as wine country.

Steelhead run into Catherine Creek at Watkins Glen in spring, providing great action for lunker fish in its narrow flow. (Mark Moskal Photo)
The hotel is within walking distance of Mark Moskal’s kayak operation, where you can rent a ‘yak to get out on the lake and have a really good shot at catching some quality smallmouths over 18 inches long, particularly during the spring spawn in May and early June when they move to the flats along the shorelines—soft plastic tubes are one of the favorite lures.

It’s also within a couple long casts of the Barge Canal, which leads spawning steelhead right into Catherine Creek in late March and early April. You can access the creek directly from State Route 14, which runs alongside it south of town for miles. Salmon egg imitations, and the real thing, do most of the damage.

It’s just over a half-mile stroll from spectacular Watkins Glen State Park, a must-see in this area, with 19 waterfalls over its 2-mile, 400-foot plunge through a gorge down to lake level.

The hotel also puts on a jumbo Ice Bar event fund raiser each winter—they carve an entire bar out of block ice, set up on the hotel patio—given the late January date of the event, thawing is not a problem—bring your long johns.

Other Attractions at Watkins Glen

Watkins Glen International Raceway is worth a visit if you’re an auto racing fan—many classic races have taken place here over decades. You can actually drive the family vehicle for a few hot laps on the track for a fee—I didn’t think my Pathfinder or my driving skills were up to it.

The western shore of Seneca has one of the densest wine tasting operations in the country—there are about 30 wineries and breweries with tasting facilities on the east shore, over 20 more on the west side, in the 30 plus miles from Watkins Glen to Geneva on the Lake, at the north end. Every winery has a half-dozen or more vintages they will insist you try—YOU NEED A DESIGNATED DRIVER. But that said, it’s a pleasant way to while away a rainy afternoon when you can’t fish—tasting fee is about $6 for a variety of “flights”, and most throw in some great local cheeses, as well. Learn more here: www.senecalakewine.com.