New catch limit for red drum to address overfishing
from The Fishing Wire
(Editor’s Note: South Carolina, like some other southeastern states, is seeing a decline in red drum numbers in recent years. Here’s a report from SCDNR on the issues involved, and what the state is doing about them.) 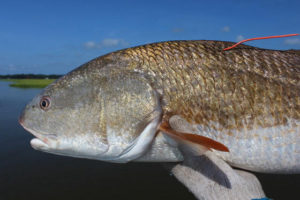 In recent years, state biologists have documented a declining trend in the state’s red drum population, which has been underscored by reports from longtime local anglers. These concerns prompted the South Carolina Department of Natural Resources (SCDNR) to take a closer look at the species last year, culminating in an assessment that found South Carolina’s red drum population was experiencing overfishing.

“We’ve been monitoring red drum populations across the state using the same techniques for nearly 30 years, and what we’ve seen over the last 10-15 years is concerning,” said assistant marine scientist Dr. Joey Ballenger, who oversees SCDNR’s red drum research. “Across the state, we’ve seen declines in abundance of the juvenile fish most commonly targeted by anglers.”

Red drum are renowned for their beautiful copper color and characteristic black tail spots. Red drum reach several feet in length and can be found in all of South Carolina’s coastal waters at different stages of their lives. SCDNR research has shown that the fish reach maturity around four years of age, although adults may live to 40 years old. A healthy population of these adult red drum is critical to the success of the fishery, as the larger a fish is, the greater its contribution of spawn to the next generation of young fish.

Adult red drum spawn in the fall, producing an annual “crop” of new fish. Recently, the crop has been relatively small. Young red drum (1-4 years old), which make up the foundation of fishing in South Carolina’s creeks and rivers, have not been plentiful over the last decade.

Research at SCDNR shows that poor reproductive years are not necessarily unusual for these long-lived species – Ballenger notes that large crops of red drum fish are only produced about twice a decade. However, Ballenger’s team has also discovered that not as many red drum are surviving from one year to the next as in previous generations. The reasons for this poor survival are unclear, but the impact has translated into fewer fish within the slot size limit, which is ultimately expected to mean fewer adult fish annually entering the spawning population.

“Not only are we seeing declines in the annual crop of fish produced by adults, we are seeing that those produced are experiencing higher mortality rates,” Dr. Ballenger said. “Over time, this translates to fewer and fewer adult fish being around to produce the next crop, resulting in a feedback loop that continues the process.”

At the same time these ecological fluctuations have occurred, fishing pressure has increased in South Carolina, especially on large adult fish.

Adult red drum are already protected from harvest in South Carolina. Under current legislation, the fish are only legal to harvest when they fall between 15-23 inches in length – a size range that they reach for a little more than a year of their life.

As a result, the red drum fishery in South Carolina is defined by catch and release – 80% of red drum caught by anglers are released. But even under ideal conditions, studies estimate that 8-16% of caught-and-released fish die after release. Minimizing the death of released adult fish is critical to maintaining good fishing.

The assessment determined that with a three fish per person per day bag limit, not enough red drum are surviving to sustain the population over the long-term.

The study also found that a modest shift in regulations – from three to two fish per person per day – would be enough, in time, to improve the number of fish recruiting into the adult population.

Companion bills codifying new catch limits (two fish per person per day and six fish per boat per day) were introduced in the S.C. Senate and House in early 2018 and received near-unanimous support on both sides of the Assembly. The Coastal Conservation Association of South Carolina played played a key role in advocating the passage of the legislative changes.

In addition to the legislative changes, SCDNR seeks to address increasing pressure on adult red drum by working with anglers to implement best handling practices. Valuable adult fish are highly susceptible to predators, disease, and exhaustion after release, making proper handling a matter of life or death.

SCDNR urges anglers who target adult red drum to use the following best practices for release:

Use a rig that minimizes the chance of hook damage (short leader, fixed sinker weighing 3 oz. or more, and barbless, non-offset and non-stainless hook)