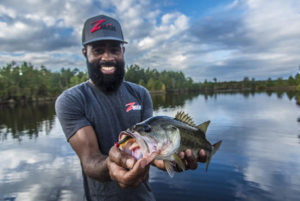 How the right jig & softbait combo can uplift your ElaZtech® game

When two complementary forces join talents, things like genius, championship performance and all-time awesome music inevitably follow. The power of the one-two punch extends to inanimate objects, as well, and certainly to fishing tackle. Of course, that doesn’t mean it’s cool to Texas rig your favorite plastic worm on a treble hook. Nor does it explain why anglers can be so painfully picky about swimbait selection or choice in finesse worms, and yet impale said bait onto whatever jighead’s lying on the deck.

The job of any good jighead is to bring out the unique talents of baits that best match its design. Disparate jighead styles deliver softbaits at different speeds, actions and depths, each performing a singular, premeditated presentation. Collars and keeper configurations are made to match and pin certain baits firmly in place. Jig-hooks vary by anatomy: size, gap, throat, shank length, wire gauge and more; with justifiable reasons for each. While a mismatched jig and bait might still catch fish, a perfect pairing can stimulate an onslaught of bites.

“We recognized early on that because ElaZtech baits are different—softer, livelier, more buoyant and much more durable—than traditional PVC baits, designing a super-tuned rigging system would take fishing ElaZtech to a whole other level,” said Daniel Nussbaum, talented fisherman and president of Z-Man® Fishing. “Sure, you can rig your favorite ElaZtech bait onto a plain jane jighead. But to take full advantage of each bait’s action, longevity and fish-catching performance, grab the right jig for the job.”

Among fifteen unique Z-Man jigheads and over fifty ElaZtech softbaits, Nussbaum highlights four of his favorite perfect pairings. “A 3-inch MinnowZ on a 3/16-ounce Trout Eye jighead is a versatile player—it’s my ‘stranded on a desert island’ survival bait,” he divulges.

A jighead with an interesting backstory, the Trout Eye jig comes from South Carolina seatrout guru Ralph Phillips, who discovered a predator’s primal attraction to the unmistakable eyes of baitfish. The U.S.-made Trout Eye jig is poured with the largest 3D eyes possible, set into a flattened teardrop shape. Strategically placed to bring out subtle rolling action on paddletail baits like the MinnowZ, the jig’s forward eye position helps the whole lure slide through sparse grass with ease. Back-to-back conical keeper barbs secure ElaZtech and other softbaits tightly to the base of the jig’s collar, while a heavy-duty, 2/0 Mustad UltraPoint hook penetrates quickly, and won’t straighten under heavy loads.

“Think of the 3-inch MinnowZ as an aggressive paddletail,” notes Nussbaum. “When you rig it on a Trout Eye jig the whole body moves with a really sweet side-to-side roll, while the tail wags the dog; looks just like the panicked swim of a minnow and catches everything—seatrout, redfish, bass, snook, and more.”

First introduced to beat back Australia’s brutally strong gamefish, the HeadlockZ HD jighead is an amazing jig and a perfect match for Z-Man’s SwimmerZ— a super-soft, split-belly paddletail that’s produced world-record barramundi. “The SwimmerZ is one of my favorite paddletails for big redfish and largemouths,” says Nussbaum. “The 4-inch version teams up nicely with a 4/0-size HeadlockZ HD, while a 6-inch SwimmerZ on an 8/0 HeadlockZ is ideal for bull reds and stripers, and holds up to the teeth of big pike.”

Matching Z-Man’s tough-as-nails ElaZtech baits, the HeadlockZ HD boasts bulletproof jighead construction, built around a custom, heavy duty 3/0, 4/0, 6/0 or 8/0 Mustad UltraPoint hook (jig-weight is engraved in head for easy ID). Riding high on the hook-shank is an ingenious, split bait keeper. The design greatly eases rigging and prevents ElaZtech and other soft plastics from sliding off the jig collar.

Exceptionally balanced for use with larger, bulkier baits, the HeadlockZ’ 90-degree bullet head amplifies body roll, which produces accentuated tail-thump and vibration. “This combo represents one of Z-Man’s most underrated big fish baits, one you can tie on and catch fish with all day long.”

The definitive lure for Ned Rig-style fishing, casting a Finesse ShroomZ / Finesse TRD combo might be the smartest bass-catching decision you can make. Simple, unassuming and almost immune to fishing pressure, this little 2-3/4-inch finesse bait and refined mushroom-shaped jighead regularly boats over 50 per day for Ned Kehde and other skilled finesse fishers. Of course, the beauty of the bait is that less-experienced anglers also hook oodles of fish with it.

Kehde himself admits the key to success is a method he calls ‘no feel.’ “That means we cannot feel what the jig-and-softbait combo is doing or where it is during the retrieve,” says Kehde. This is largely attributed to Kehde’s preference for a light jighead, in the neighborhood of 1/16-ounce. Proving the combo’s astonishing versatility, Kehde and his friends have ascribed six different finesse retrieves, including the swim-glide-and-shake, hop-and-bounce and drag-and-deadstick, among others.

Creating the illusion of a single edible critter, the mushroom shaped Finesse ShroomZ head flows seamlessly into the nose of the sub-3-inch Finesse TRD. The unique head shape moves smoothly over the substrate, pivoting and activating the ElaZtech material with each interruption in the jig’s path. The jig’s minimally invasive “hangnail” keeper barb pins finesse baits like the TRD surprisingly tight to the jig; some anglers add a drop of superglue to the underside of the jighead for an even better bond.

A model of simplicity, the Finesse TRD itself glides seductively on the drop, tail shimmying just enough to speak of something alive. Imbued with custom salt content for a precise sink rate, anglers like Kehde often chose to increase buoyancy by stretching the bait and removing salt.

A rising star in swimbait circles, the 2-1/2- and 3-inch Slim SwimZ offers an intelligent design that gives it some interesting underwater moves. Rigged on a downsized NedlockZ HD jig, the finesse paddletail bait comes to life, even at slow retrieve speeds. Molded in lighter 1/5- to 1/15-ounce sizes, the NedlockZ HD sports an extra-heavy-duty hook that allow for heavier tackle and drag settings than Finesse ShroomZ jigheads. The jig’s innovative split keeper allows for effortless rigging, holding both ElaZtech and soft plastics firmly in place. The medium-length hook shank is a fine fit for the Slim SwimZ and other finesse baits.

“We crafted the Slim SwimZ with an inward-curved tail,” Nussbaum says. “The configuration lets you activate the bait at extra slow speeds. Or fish it fast for even more action. When you pull it, the tail scoops water, producing a high-velocity, high-action wiggle. We’re getting great feedback from folks catching big crappies, white bass and even walleyes. And when bass key on small forage, this compact combo scores big.”

About Z-Man Fishing Products: A dynamic Charleston, South Carolina based company, Z-Man Fishing Products has melded leading edge fishing tackle with technology for nearly three decades. Z-Man has long been among the industry’s largest suppliers of silicone skirt material used in jigs, spinnerbaits and other lures. Creator of the Original ChatterBait®, Z-Man is also the renowned innovators of 10X Tough ElaZtech softbaits, fast becoming the most coveted baits in fresh- and saltwater. Z-Man is one of the fastest-growing lure brands worldwide. See more at www.zmanfishing.com.

About ElaZtech®: Z-Man’s proprietary ElaZtech material is remarkably soft, pliable, and 10X tougher than traditional soft plastics. ElaZtech resists nicks, cuts, and tears better than other softbaits and boasts one of the highest fish-per-bait ratings in the industry, resulting in anglers not having to waste time searching for a new bait when the fish are biting. This unique material is naturally buoyant, creating a more visible, lifelike, and attractive target to gamefish. Unlike most other soft plastic baits, ElaZtech contains no PVC, plastisol or phthalates, and is non-toxic.