When we carried the notice last week that Lang’s Auctions, Inc. would be selling off items from the estate of esteemed writer, angler and innovator Bernard “Lefty” Kreh, I knew I had to put the dates into my calendar and check it out.

I did, and it was an eye-opening event. I grew up around the auction business. From cars and trucks, to estates, houses, and livestock including cattle, horses and the occasional llamas, camels and other zoo critters to used furniture, my family was involved in auctions. The word involved is far more accurate than saying we were interested in them, because for several years, my dad had a small auction house.

It was there where I first realized that people can get so into the competition of bidding that their brains seem to close down. That’s how you wind up coming home to try and explain a $75 dollar “bargain” lamp that has a $12 price sticker on its base. You got caught up in the competition rather than keeping a cool head.

The Lang’s auction, however, was totally different from the ones of my childhood. This was much more closely related to a Christie’s auction. Great catalog, wonderful illustrations and accurate descriptions of the items offered. The one area where they were wrong was the portion that was so eye-opening: the estimated price ranges for the items.

I had an eye on this personal letter from President George H.W. Bush to Kreh. As a fan of both, I thought it a great two-fer, especially at the $100-150 estimated auction price. I didn’t win. 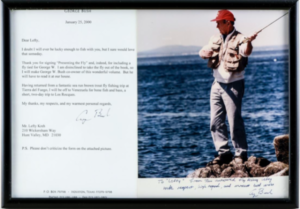 A dyed-in-the-wool fan of letters and photographs from famous people, I had my eye on a personal letter from President George H.W. Bush to Kreh thanking Lefty for sending Mr. Bush a copy of “Presenting the Fly”. According to the estimated price range, I felt my $100 bid strong enough to scare off the tire-kickers. Turns out, I was the tire kicker. The photo and accompanying image went for $650. And nearly everything else I’d found interesting shot straight through the estimates, leaving my bids ‘way down on the live bidding lists.

My abject failure to get close on anything, quickly had me checking into lure collecting. Turns out I was (again) a victim of my own ignorance. There are several levels of lure collecting – and I was out of my league.

A legendary figure like Lefty Kreh didn’t just have significant fishing tackle, he invented a bunch of it. That’s why the “Lefty’s Deceivers” in this auction sold in the hundreds – or higher. And those collections of lures with the hand-drawn “Plate A, B,C, etc” notations were worth so much. They were the lures for the illustrations of the definitive books on the tackle.

As I watched the auction rolling along, I realized many of the items weren’t antique- that’s a designation serious collectors only attach to pre-1900 lures. They weren’t the old, rusty, greasy lures left in the bottom of your grandfather’s ancient tackle box, either.

These lures were the “heroes” of their genre- the lures kept in pristine condition, accompanied in many cases by their original packaging and in “unfished” condition. They’d been used for catalogs, sent to notable writers (like Kreh) or given to serious collectors. 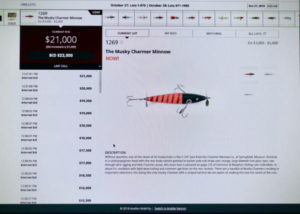 Before this weekend, I don’t know if I’d ever heard of a Musky Charmer. But after this one sold for $21,000, I’m not likely to forget it, Charmer Bait Company, nor the Creek Chub Bait Company of Garrett, Indiana. Screenshot from Lang’s auction.

Researching over the weekend, I scratched the surface on a whole new category of angling- the lure collectors. The people who can look at an old lure and instantly recognize its parts, paint scheme, and likely year of manufacture. To them, it was about the art of the lure, not its allure to fish.

After all, the website www.antiquelures.com writes, “Antique lures have no real intrinsic value above five to ten dollars. For some collectors there is an emotional connection to our past or an individual we cared about when growing up with whom we associated fishing. There are those that love beautiful things that are old. But in the end, lures are historical artwork that was, in some cases, mass produced more than sixty years ago. There are plenty of old lures out there. But the real quest is for historical pieces or those preserved in new condition.”

Those were the people participating in this auction -and while I might share their love of all things old and exquisitely made, I lacked the baseline knowledge to know whether or not I was wasting my time bidding.

For me, the auction wasn’t about the things being auctioned, it was about my respect for the man who’d owned them last. To me, having something from Lefty would serve as a trigger for my memories of- and admiration for- him.

That’s why I was delighted to learn – after the fact- that I hadn’t struck out despite the fact I was fighting out of my weight class. Before the auction had begun, I’d bid on a piece that caught my eye because it didn’t look particularly historic. 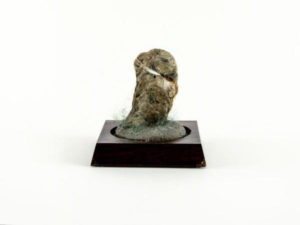 A mounted Porter Stone Fly (above) with a base (below) that illustrates how revered “Lefty” was among fly fishermen. It will enjoy the same standing in its new home. 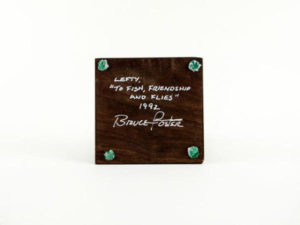 Today, I’m the proud new owner of a “Mounted Porter Shrimp Fly” with a base that reads “Lefty, To Fish, Friendship, and Flies” and signed by its tyer, Bruce Porter. It might not be historic, but it will carry the memory of Lefty from one admirer to another.

That’s significant enough for me.