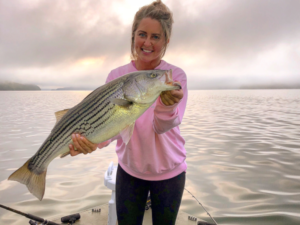 FRANKFORT, Ky. – The higher angle of the sun during the day brings warm breezes as we come into the end of April. The glorious sunny days of late and air temperatures in the 70s make people joyous.

This weather makes the striped bass in Lake Cumberland hungry.

“We caught five keepers over 22 inches and about eight short stripers on our last trip,” said Jeff Bardroff, owner of JBs Guide Service on Lake Cumberland. “The fish had me so busy I couldn’t eat breakfast. By the time I got done with one fish, another rod would go down.”

Bardroff said they also caught some smallmouth and spotted bass, known as Kentucky bass along with the striped bass. His largest fish of the day was a 29-incher. Striped bass of that length usually weigh between 11 and 13 pounds. A friend of his fished Lake Cumberland last Sunday and caught an 18-pound and a 22-pound striped bass.

“Every fish we have been catching is plumb fat, full of shad and alewives,” Bardroff said. “There have been many nice, heavy fish caught in the last few weeks.”

This is good news considering how the year started. Lake Cumberland reached record pool level of elevation 756.2 feet on Feb. 26. Normal winter pool for Lake Cumberland is 705 feet while summer pool is 725 feet. Lake Cumberland’s level is currently about 722 feet.

“When they started pulling less water through Wolf Creek Dam about two weeks ago, the stripers started gorging,” Bardroff said. He’s been catching fish in the major creek arms from the Wolf Creek arm of the lake to the dam.

Bardroff, who also is an administrative specialist for the Kentucky Department of Fish and Wildlife Resources, trolls shad or alewives under planer boards. He catches bait from the lake using a cast net, but commercially-bought large shiners also work for these fish.

“The stripers are shallow right now, from 15 feet deep up to the surface,” he said. He prefers to stagger the depth of his lines until he finds the depth the stripers prefer. “I put out five planer boards on each side of the boat at this time of year,” Bardroff said. “I use a light weight of 3/8- to 1/2-ounce on the planer boards, but right now I have no weight on the most outside lines.”

He also puts out two downlines off the front of the boat using 12-foot rods with 3-or 4-ounces of weight. “The longer rods help keep them from tangling with lines in the back,” Bardroff said. “It is a lot of fun catching stripers on those long rods.”

Bardroff also puts out two lines off the back suspending bait under large, striper-sized bobbers. He uses 20-pound test monofilament for the main line with 15-pound fluorocarbon for the leader. He ties a 2/0 circle hook on the business end.

This set up works well for bottom fishing for those who don’t have the equipment to troll. Start at the midway point of a major creek arm and beach the boat near a point. Put out a few lines rigged with shad, alewives or shiners at different depths. Give the spot one-half hour and move. Eventually you’ll find stripers.

April through late May is also the time of year for anglers who want thrilling sport, as stripers rip through spawning schools of threadfin shad and alewives at night.

“They are catching them at night right now on Rapala Slivers,” Bardroff said. The Sliver runs from 9- to 11-feet deep and anglers slice points in the major creek arms and the main lake at night with these lures. The best colors are the venerable red and white or silver.

As the water warms a touch, lures such as a Redfin or Jointed Thunderstick draw vicious strikes. These are floating/diving style lures, but gently rock back and forth on the lake’s surface when retrieved slowly. Hold on tightly to your rod and keep your mind on business when night fishing for striped bass. They hit these lures with a savagery rarely found in nature and can pull the rod from your hands.

“I fish main lake points and the points in the major creek arms for stripers at night,” said Major Shane Carrier, assistant director for law enforcement for Kentucky Fish and Wildlife. “I hop point to point and fish the 100 yards before the point and the 100 yards after.”

Carrier’s favorite lure is the Jointed Thunderstick in chrome with a blue back and a green tiger color they no longer make. “I’ve caught so many stripers at night on that lure that it no longer has much paint on it,” he said.

Medium-heavy to heavy baitcasting gear and lines of at least 17-pound test are recommended for Slivers, Redfins and Thundersticks. Light inshore saltwater medium-heavy spinning gear also works for night stripers, but throwing large lures on spinning tackle is taxing to the hands and wrists after a few hours.

Avoid setting the hook until you feel the weight of the fish. These lures attract huge walleye at night as well and they must take the lure a bit before you can land them.

“I caught my biggest walleye, a 7 ½-pounder that was 31 inches long, at night striper fishing,” Carrier said. “You catch more walleye in May at night. May is my favorite time to night fish because you can catch stripers and walleye.”

Spring has sprung, and it is time to fish for striped bass at Lake Cumberland.

Author Lee McClellan is a nationally award-winning associate editor for Kentucky Afield magazine, the official publication of the Kentucky Department of Fish and Wildlife Resources. He is a life-long hunter and angler, with a passion for smallmouth bass fishing.