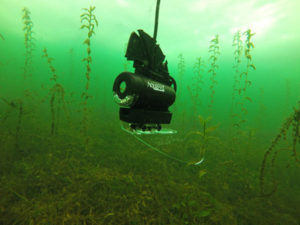 Use a camera for ice fishing

A singular theme runs through the game of sight-fishing. It’s the visual see-stalk-cast and hang-on-to-your-rod sequence that anglers can’t get enough of; why fly fishers cherish above all else drifting dry flies for trout; why inshore anglers can’t sleep the night before an adventure on the shallow bonefish flats; why muskie hunters happily take a beating for twelve hours straight for the mere chance at one big fish . . .

Believe it or not, the same motivation fuels the pursuit of crappies, walleyes or other species through a hole in a frozen lake — especially when one views the action via underwater camera lens. The rush of tension that occurs each time you watch a fish stalk your bait can turn excitement into addiction. Big bonuses result, too. Like learning new and fascinating fish behaviors, or discovering what your lure, line and retrieve really look like underwater, having witnessed the aquatic drama with your own two eyes.

“Panfish” Phil Laube is a Minnesota based angling adventurer who rarely ventures forth without his underwater camera. Laube’s especially enthusiastic about employing an Aqua-Vu to study his presentation and how fish react to it. If sight-fishing via camera lens happens to be super exciting, he doesn’t exactly mind that either.

“For a lot of anglers, fishing with a camera has become the main reason they don’t mind braving the winter elements,” Laube admits. “It’s like, if you remove the visual element of stalking big tarpon or redfish on the shallow flats, it’s still technically fishing, just not nearly as much fun.”

Laube says that while he always totes his sonar unit for missions on ice, he also brings the camera, and deploys the optics whenever he can. “There are things you simply can’t experience or learn about what’s happening without seeing the real-world underwater landscape.”

In terms of essential and interesting discoveries, Laube offers the following aquatic observations:

(1) Confidence – “The camera has really improved my ability as a fisherman, especially in terms of coaxing fish to bite. It’s all about visualization and confidence. After seeing fish repeatedly respond favorably or negatively toward different lures and actions, you become much more certain of what’s happening below — even when you’re not using a camera. You can accurately picture what everything looks like, which allows me to predict fish response in some cases. Visualization yields confidence.”

(2) Interpreting Sonar – “There’s no better way to learn what your sonar unit is showing you than to put a camera down there at the same time. I promise you’ll discover you’ve been wrong about certain signals and about the way fish truly approach your lure. A lot of anglers think, for example, fish always ‘rise up’ to bite because of the way signals are shown on sonar, relative to the transducer. This isn’t often the case. Fish on sharp drop-offs is another one. If you’re set up on a sharp break — particularly with big rocks there to obstruct the transducer signal — your sonar may not show fish close to the bottom at all.

“The other big thing is species ID. Based on watching fish on the camera, you can learn what a crappie looks like on sonar versus a sunfish, or walleye versus pike. For example, sunfish often approach a lure slowly, deliberately, while crappies often chase and move more rapidly.”

(1) Line Truths – “Fish reject spinning jigs and lures, every time. I use Frabill Straightline reels to reduce spin, but they don’t completely eliminate it. You need to keep the bait moving and vibrating with rapid, wrist-shaking movements, almost non-stop. I run 3- or 4-pound test for panfish most of the time. Fish generally aren’t line-shy. But it’s important to match line to lure weight. Too heavy of line makes lures spin more. In deep water, bites can be undetectable. So, you want a heavier lure hanging below a coil-free line. Coils reduce sensitivity. The new co-polymer and fluorocarbon ice lines are awesome — slick, straight, and largely memory-free. By the way, fluorocarbon isn’t as invisible as you think.

(2) Ace-in-the Hole Spots – “Time and again, the Aqua-Vu has shown me the great attracting power of tall, standing vegetation — or other vertical cover — for attracting crappies, sunfish and largemouth bass. Pike, too. Clumps or small clusters of beanstalk-like cabbage are particularly appealing. If you find these, you’ll find fish nearby the majority of the time. Same deal with sunken trees, brushpiles and cribs. The camera is often the only way to spot fish in the dense cover, plus reveal how they’re relating to it.”

(3) Lure Selection – “Used to be the first thing I did when a fish rejected my lure was to switch color. I’ve learned through the lens that the first adjustment is to downsize or up-size to the next smaller or larger version of the lure you’re using. Adjust your jigging cadence, too. Slow down. Color can be important, though it’s not usually nearly so critical as other factors.

“Finally, watch how fish are biting your lure. If you’re missing fish, could be they’re biting the jighead and missing the hook. Or, they’re simply nipping the tail of the plastic. Downsizing both jig and plastic can be the ticket. I’ve got one super-secret panfish jig that’s armed with hooks on both sides of the jighead. Stings every fish that bites.”