Fishing in North Dakota has never been better. The state boasts 22 species of game fish and 449 bodies of water where anglers can wet a line.

Quite a few of those fishing holes are relatively new. Since the early 1990s, when a long drought ended and a wet cycle began, previously dry lakes filled, and the North Dakota Game and Fish Department stocked many of these new waters with fish.

A strange thing happens when a new lake is formed. Scott Gangl, Department fisheries management section leader, said the technical term for the fertility of a new body of water is “trophic upsurge.” 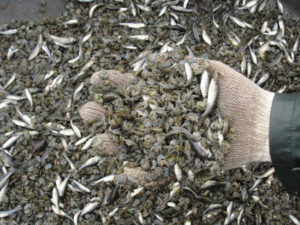 Walleye grow fat on this food in North Dakota

With a menu of scuds, fathead minnows and other prey, walleyes stocked in North Dakota’s new prairie lakes grow rapidly.

“It’s an explosion of nutrients, insects and resources fish thrive on,” he said. “When you flood vegetation or soil that had been dry, the nutrients are released into the water. Insects feed on these nutrients, and minnows – mostly fathead minnows in North Dakota – eat the insects, and this provides a fantastic food source for predatory fish, like walleyes.”

Because of this trophic upsurge, walleyes stocked in these new prairie lakes grow rapidly. Game and Fish fisheries biologists compile data on walleyes throughout the state, including growth rates. They’ve found that the average walleye in traditional waters, such as Lake Sakakawea, Lake Oahe or Lake Tschida, is 6 inches long at the end of the first growing season; 10 inches after two growing seasons; 14 inches after three seasons; and 16 inches after four seasons.

By contrast, walleyes in the nutrient-rich new prairie lakes, such as Sibley (Kidder County), Lehr WMA (McIntosh County), Kraft (Sargent County) and Twin Lakes (LaMoure County), are 9 inches at the end of the first season; 14 inches after two seasons; 16 inches after three seasons; and 18 inches after four seasons.

With walleyes growing faster in these new prairie waters, anglers have good opportunities to catch good-sized fish within a few years of the lakes being established. “Our strategy is to stock the heck out of those waters,” Gangl said. “If there are enough minnows, sometimes you can’t put enough fish in them to get the fathead populations down enough to let the fish get hungry, so we stock those waters with as many fish as we can.”

This means there are potentially more good-sized walleyes in the lakes than the minnow populations will comfortably feed. This in turn means plenty of fish under the surface are hungry enough to take the bait offered to them by an enterprising angler. In short, it’s a recipe for a good bite.

The fish stocked in these lakes don’t grow to catchable-size right away?– and in fact, walleye aren’t stocked immediately after lakes flood. Once a lake is established, fisheries biologists evaluate its viability. Among the considerations are the length of time it will likely hold water, the number of minnows it holds, and whether it can be accessed by the public.

“We can stock a lake if we have good, legal public access,” said Paul Bailey, Department south central fisheries district supervisor. “It might be a section line or a road, but often we get easements from willing landowners.”

Even after all of that, walleye are not usually the first fish stocked.

“We stock perch first,” Bailey said. “Perch deposit their eggs on flooded vegetation, so they do well in those newly flooded lakes.”

The perch serve two purposes, Power said. They provide another game fish for anglers to target, and they become an intermediate food source for growing walleyes when the larger, predatory fish are released into the lakes.

Once the forage base is established, either through minnows that naturally occur in the waters or perch that are trapped and transported from other waters in the state, walleyes are stocked in the lakes. The walleyes come from the Garrison Dam National Fish Hatchery, and they’re mostly stocked as 1- to 2-inch fingerlings, though a few waters receive nearly microscopic fry (the developmental stage immediately following the fish hatching from their eggs).

From there, managing the fishery is a balancing act. If a lake has too many minnows, they outcompete perch for forage, and perch numbers decline. Also, when minnows provide more than enough food for walleyes to eat, they are not as interested in taking an angler’s lure.

Winter is a great time to find some of those hungry walleyes, too. Some of the newer lakes lack boat ramps, so the only way to get out to the middle of those lakes is to get there on the frozen surface.

So check with your local bait store or online ice fishing forum to find where the big ones are biting. You’ll not only have a good chance to put some fryers in the pan, you’ll also help Game and Fish keep the predator-prey balance to ensure these waters continue to provide good fishing opportunities for years to come.

Forage and Other Factors
The Facebook post from the North Dakota Game and Fish Department says there are thousands of walleye in the lake you like to fish, so you grab your tackle and beat feet for the water. But when you get there, you try every lure in your tackle box, cast into 43 different likely spots, but you don’t get so much as a single bump on the end of your line.

What gives? Is this some sort of Candid Camera moment? Are you the butt of some cruel YouTube video, being laughed at as the most gullible angler in North Dakota?

Not at all. The netting surveys and other measures Game and Fish biologists use to monitor fisheries are good indicators of the numbers of fish below the surface. But the fact that there are a lot of fish in a lake doesn’t necessarily mean those fish will take an angler’s lure. There are a lot of factors that affect the bite.

“If the fish are well-fed from natural sources, they might not get into the bite,” said Scott Gangl, Department fisheries management section leader. On the flip side, “if you have a great bite, it indicates a lack of natural forage.” That forage, for the most part, is fathead minnows.

But Gangl said other factors play into the bite, as well.

“Weather patterns play a part,” he said. “When you see fronts rolling in, the fish may bite – or they may stop biting. Weather plays a role, but it’s not necessarily consistent.” He said as weather changes, you may see a change in fish activity.

“Early ice is usually popular,” Gangl said. “The water’s still cooling, but it hasn’t gotten as cold as it’s going to get. As the temperature drops, the fish’s metabolism slows, and after the ice has been on for a while, and the water is colder, you might get that midwinter lull in activity.”

Gangl said he’s been fishing and has seen lots of fish on his Vexilar, but none of those fish would take his lure. “Sometimes it just happens like that,” he said. “There are obviously a lot of fish down there, but none of them are interested in the bait. You might get one to bite from time to time, but it’s pretty slow. Then all of a sudden, it all changes, and you get the rest of your limit in an hour.”

Often, that sudden change hits near sunset, or the fish will bite early in the morning, then suddenly stop as the sun gets higher. Gangl said this could be because walleye are better adapted to hunting in the dark than their prey – fathead minnows – are to seeing danger in darker water.

“It’s a factor of efficiency,” he said. “Fish forage on what is optimum. They try to get the best food they can get with the least amount of energy expended.”

Every fish in every fishery is an individual, so there are no scientific standards for what triggers the bite. You can move to new holes if the fish aren’t biting where you are, and maybe you’ll find a few active fish somewhere else. Or you can sit still and keep fishing, waiting for the conditions to cause the fish to get hungry.

After all, it’s called “fishing,” and not “catching,” for a reason. Greg Power, Department fisheries division chief may have said it best: “Mother Nature’s pendulum does swing wildly and rapidly in North Dakota.”

The best bet is to be in the right place at the right time when that pendulum swings your way.