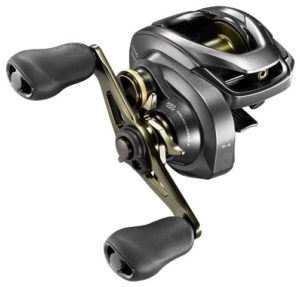 The stampede is on. As you read this, I’ll be among the kid-in-the-candy-store throngs stumbling among the aisles of ICAST, trying to figure exactly how many of these wonderful new toys I’ll be able to fit into my tackleboxes–and my budget.

At first blush, here are a few that popped out at me:

The Bi-Yak is an inventive combination of kayak and paddleboard, with twin sponsons that can be opened out for added stability when used as a SUP, pushed together to function as a cat-hull kayak otherwise for easier paddling. I like the idea that it’s a lot more stable than a mono-hull–I’m not as nimble as I used to be, and I never was. The maker says it’s exceptionally stable due to the twin hulls, and it’s unsinkable; www.biyakboats.com.

Shimano’s digital Curado DC Series baitcasters should be a hot item both for bass-heads and for inshore saltwater guys–a microcomputer inside the reel monitors spool speeds up to 1000 times per second(!!) to make sure there are no over-runs, even when making tricky upwind casts or skipping lures under a dock, according to the company. Product Manager Trey Epich says the reel also has the legendary durability of the Curado lineup. Amazingly, the thing still sells for around $250, which is not that much more than a conventional top-level baitcaster. No word on whether it can be hacked by the Russians; www.fish.shimano.com.

“For anglers who don’t want to use spinning tackle and yet still need to throw lures that may weigh as little as 1/8 ounce, this is the reel,” says Epich. It’s likely to be a favorite with competition anglers who don’t like to shift gears from baitcasters to spinning, though the price, over $400, will limit it to all but very serious (and flush) competitors.

Raymarine’s Axiom now integrates with DJI drones. This will give a big advantage for anglers seeking fish (or bait) in clear water, and of course it also allows taking some really spectacular photos and video of your boat and angling action–once you learn to fly the thing. We suggest practicing, a lot, on dry land first; www.raymarine.com.

In apparel, fisher-friendly gear keeps on getting better, and selling very well according to Travis Gessley, designer for Under Armour. He said all price points are doing well, but the Seamless Fish Hunter Hoodie, at $65, seems in the sweet spot–very light, stretchable, cool and quick-drying, according to Gessley; www.underarmour.com. (PS: He said lady’s fishing clothing makes up about 10 percent of the UA market, and growing steadily.)

Remember the Crocodile Dundee quote “That’s not a knife–THIS is a knife”? That’s likely to be the reaction when you bring the new Danco 13″ Boning Knife to the cleaning table. For those who clean big grouper, snapper, mahi, kings and the like, a really long, thin but strong blade like this one can be a big help, and it’s priced right; www.dancopliers.com.

We’ll have more tomorrow, as the Big Show heads towards the wind-up.