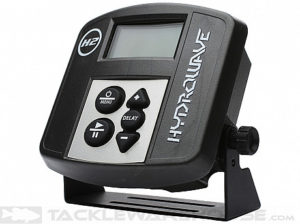 The TH Marine Hydrowave H2 is a unit that plays a sound through an underwater speaker that is usually mounted on a trolling motor. The sounds it plays are supposed to represent sounds that make fish feed. The Hydrowave H2 has a variety of choices of sounds, from crawfish on gravel, one of my favorites, to deep bait to blueback herring, a good one on herring lakes like Clarks Hill and Lanier.

Does it work? Honestly, I do not know, but I always have it playing during tournaments.

Many of the pros I have done Map of the Month articles with for Alabama and Georgia Outdoor News swear by it, even those not sponsored by the company and have to buy their own units. That means a lot to me, the ones not sponsored using it.

One experience indicates it does work. While fishing a club tournament at Lake Lanier during the herring spawn, I stopped off a seawall where the spotted bass had been schooling. There was no surface activity at all.

When I got up front and put my trolling motor in the water, with the Hydrowave H2 playing the herring spawn, the water off the seawall exploded with several big spots chasing baitfish. Like a dummy, I had not picked up my rod first, and by the time I unstrapped it and was ready to cast, the fish had disappeared. From then on I have my rod ready to cast when putting the unit in the water.

I have had my unit for about two years and have done well in many tournaments when the fishing was very tough. It gives me a little extra confidence when it is on, always an important factor.

My old unit died last week, out of warranty that last one year, but I ordered another one to replace it. That is how much I believe in it. Since I was replacing an old unit, they did give me a good discount on the new one.