Though hurricanes can be hell for human residents of coastal areas, a new Texas study seems to indicate that they are not harmful to inshore fish, and may even be helpful. 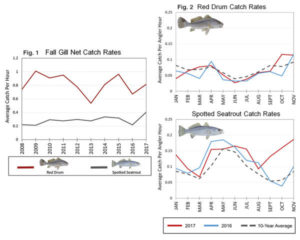 On August 25, 2017, Hurricane Harvey made landfall as a category four storm in the small fishing community of Rockport. Winds as high as 150 mph and a storm surge in excess of seven feet battered the town before the storm moved inland and unleashed record-breaking quantities of rain along the Texas coast. The economically important commercial and recreational fisheries were certainly not spared from the devastation left in the wake of this historic storm. A preliminary assessment conducted by Texas Parks and Wildlife Department (TPWD) and the National Oceanic and Atmospheric Administration (NOAA) estimated that damages to the state’s fishing operations and fishing-related businesses exceeds $58 million.

As a biologist working in “Hurricane Harvey ground-zero,” a common question I’ve fielded from concerned constituents is “What are the ecological impacts of the storm on the fisheries of the Coastal Bend?”

It’s well-documented that major storms like Harvey can have lasting effects on estuarine communities. The greatest threat to shallow-water species is the rapid disruption of normal salinity regimes via highly saline storm surges followed by excessive freshwater inflows. Paired with increased organic loading, these hydrological changes can result in low-oxygen conditions that trigger fish kills. Fortunately, for the Aransas Bay system, these changes were highly localized and relatively short-lasting.

Hurricanes also impact the habitats that marine species rely upon. In the Coastal Bend, many oyster reefs were broken up by intense wave action and, in some spots, buried under thick layers of silt and debris. Seagrass beds, mangroves, and salt marshes also suffered considerable losses due to high winds and powerful waves. It will be quite some time before we fully understand how the effects of this habitat degradation propagate up the food chain. Fortunately, data from TPWD monitoring programs indicate that the immediate impacts on popular bait species (i.e. blue crabs, shrimp, and Atlantic croaker) were minimal.

Currently, recreationally and commercially important finfish appear to have actually benefited from the storm. Relief for these species comes by means of reduced harvest pressure. Local anglers were preoccupied with recovery and repairs and faced numerous obstacles to wetting a line in the wake of the storm. Public access to the bays was limited as boat ramps and fishing piers were damaged, and losses to private and for-hire vessels was extensive. Significant damage to bait stands and commercial shrimp boats also made bait difficult to procure. Lastly, visiting anglers struggled to find hotel accommodations in the months following Harvey.

To monitor fishing pressure and total landings, TPWD routinely conducts angler surveys and trailer counts at boat ramps. In September 2017, we documented an 85% decline in boating activity in the Aransas Bay system compared to 2016.We intercepted an average of only two fishing trip interviews per survey, down from 16 the previous year. In fact, more than half of September’s angler surveys had no fishing trip interviews. Fishing activity bounced back over the next few months, but still remains below average.

So what impact did reduced angler pressure have on our local fish populations?

To answer that question, we looked at data collected during TPWD’s biannual gill net sampling program. For our two most popular game fish, spotted seatrout and red drum, the results were extremely promising (Figure 1).

In the months following the storm, red drum were caught in the nets at a rate of 0.81 fish/hr, up from 0.67 fish/hr in 2016 and close to the 10-year average. Spotted seatrout were caught at a rate of 0.41 fish/hr, a huge improvement over 2016 (0.22 fish/hr) and the 10-year average (0.29 fish/hr). This data implies that these species are actually more abundant in Aransas Bay following Hurricane Harvey.

Anglers were landing red drum at higher rates in September 2017 compared to the previous year, and at much higher rates than the 10-year average in October and November. Spotted seatrout were being caught at roughly twice the rate as the previous year and the 10-year average from September through November. Though still too early to say conclusively, it appears as though these trends have continued into the spring.

To better understand the long-term effects of Hurricane Harvey, TPWD will continue to closely monitor our fisheries in the coming months and years. Though we usually perceive hurricanes as purely destructive, it’s important to note that they are a recurring natural force acting along the Gulf of Mexico. Our ecological communities, including our highly-prized finfish, have evolved and adapted in response to these large storm systems and, as our data shows, can actually benefit from the occasional disturbance.

Recovery efforts in Rockport and the surrounding areas are making daily progress, and the local fishing community is gradually returning to normalcy. Boat ramps, marinas, bait stands, and fishing guides are rapidly getting back to business, partly due to funding set aside for Federal Fisheries Disaster relief. So if you find yourself with that burning desire to bend a rod, grab your fishing license and head down to the Coastal Bend. Aransas Bay is open for business and the bite is on!