From The Fishing Wire 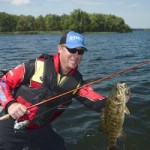 Of all the problems bass tournament pros face, being forced to re-locate fish that have suddenly moved ranks among the hardest to solve, and it happens often this time of year during the transition from spring into summer. It happened recently to Yamaha Pro Greg Vinson, who after leading a Bassmaster® Elite event for two days, lost his fish the next day and fell to 23rd in the standings.

“I did not have a good practice at Bull Shoals, but on the first day of competition the bass had moved to an area I thought they might go to,” explains Vinson, considered one of the best at re-locating lost bass, “and I caught nearly 17 pounds, enough to lead the tournament. The next day, they weren’t there, but I managed to find them again nearly 400 yards away, and caught more than 13 pounds and kept the lead.

“On the third day, they disappeared again and I never re-located them. I really don’t know where they went, or why they left.”

Over the years, Vinson has studied bass habits closely in order to better figure out why bass do change locations so suddenly and where they might move to under certain situations. What continually surprises him is how fast bass do re-locate, and how far they may travel.

Vinson says finding the baitfish can sometimes be key to relocating a school of quality fish.
“Generally, if the weather has been cooler than normal in the spring and it starts warming quickly, bass will move shallow,” notes the Yamaha Pro, “while if it has been warm in the autumn and turns suddenly cold, any fish in shallow water move back out toward deeper water. In either case, a school of fish can make a mass movement overnight and travel several hundred yards.

“At Bull Shoals, when the bass moved shallow, I re-located them by finding baitfish first, and sometimes forage like this will actually trigger bass to move, because the forage is even more sensitive to temperature changes and moves first. When I’m trying to re-locate bass that have moved, I always start looking for baitfish at the same time because bass do follow them.”

Changes in water conditions, such as becoming extremely muddy due to rain and runoff, may also cause bass to move. When that happens, Vinson looks for the nearest clear water.

“Changing water conditions can be tricky because the bass may simply become inactive and just stop biting,” warns the Yamaha Pro. “Whenever I’ve been catching bass steadily and then stop getting bites, I first change lures and retrieves, just to make certain the fish really have left.

Rapid changes in temperature are the biggest mover or schools of bass, says Vinson–and sometimes, relocating them can be a real challenge.

If I’ve been using a fast-moving jerkbait, for example, I’ll change to a much slower soft plastic bait, or if I’ve been catching bass on a slow retrieve, I’ll speed up and try for a reaction strike.

“After I’m sure the fish have moved, I’ll usually use a spinnerbait to try to find them again because it’s such a good reaction strike lure.”

When he realizes his bass have definitely left the area, Vinson also looks for the nearest available cover when he thinks the fish have moved shallow, or the first substantial depth change when he believes they have moved deeper.

“And sometimes, if you just can’t find your bass again anywhere, the best thing may be to leave the area entirely and just start over again,” laughs the Yamaha Pro. “If I’ve been catching bass in a tributary creek, for instance, I may try to find another creek with similar cover or structure and I can establish a similar pattern.

“The trouble is that when you have been catching bass consistently in a certain area, it’s really, really hard to make yourself leave that spot. That’s what happened to me at Bull Shoals. After catching more than 30 pounds of bass in two days and leading the tournament both of those days, I was convinced I could re-locate those fish and start catching them again, but I never did.

“I honestly do not know where they went.”