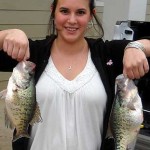 In the summer, there are a lot of areas in a lake that will be home to fish. Some fish will be in the deep water close to structure, some will be suspended over deep water hanging out around baitfish, and some will be in the shallow sloppy vegetation. But on any lake in the Midwest, you can bet that if there is a good weedline in the mid range depths, there will be fish nearby. They might be largemouth bass, could be crappies, there will probably be some walleyes in the area, and you can bet a musky or northern pike will be cruising through every now and then as well. For the next couple of months, the weedline is going to be the grocery store for fish.

Just to be clear, the weedline that we’re talking about usually consists of cabbage weeds. Clumps of coontail weeds are also good. The tops of the weeds could poke above the surface of the water, but mostly the weedline is below the surface. The weedline could be in five or fifteen feet of water. Generally, the clearer the water, the deeper the weedline.

Lots of baits will work on the weedline. Early in the day, later in the evening, or on cloudy days, it works well to fish a spinnerbait over the tops of the weeds. Sometimes you’ll want the spinnerbait to bulge the water’s surface, other times a lift-drop retrieve will be best. Regardless of retrieve, you’ll want to use a spinnerbait that has hardware that enables the blade to turn at the slowest speeds. A Pro Series Reed-Runner spinnerbait is perfect for working over and around the weedline.

Lots of other techniques will work along the weedline, but day in and day out, it’s tough to beat a jig and soft bait of some sort. Soft bait appeals to any fish that lives on the weedline.

When some anglers think soft bait and jigs on the weedline, they automatically think of a worm shaped bait. Worms have caught lots of fish on lots of weedlines, but it is possible that fish become conditioned to a traditional worm shape. Much of the time, if you try something a little different, you’ll catch more fish. A fairly new worm shape that has been out-producing traditional worms is the Berkley PowerBait SaberTail. The SaberTail looks just a little different than most worms, and lately, it’s been a lot better than most worms.

A jig designed for soft bait is also important. The Lip-Stick Jig-Worm has a long shank hook and a bait holder that prevents the soft bait from sliding down the hook. For soft bait, this is the jig you should use.

When the fish are active, a heavier jig works best as it allows you to cover water faster.

A smaller jig allows for a slower fall which can trigger fish that are reluctant to bite.

Eight pound Berkley Trilene Sensation is about perfect most of the time for working the weedline.

Right now is a great time to be fishing, and the weedline is great place to start your search for fish.