Finding Fish In Transition
from The Fishing Wire

Eufaula, AL – Typically, as fall arrives, many of us head for the tree stand or blind, turning our attention to birds and bucks. Yet, what’s happening on the water this time of the year can be equally as awesome as what’s happening in the field. 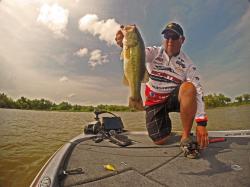 Vahrenberg verifies the presence of a kicker fish on the tree identified with 360 Imaging.

Here’s how a handful of fishing’s top experts find and pattern bass, walleyes and panfish during the fall and winter – and how you can do the same.

Missouri-based tournament pro Doug Vahrenberg says his fall and winter bass game has never been better thanks to the trifecta of Humminbird’s LakeMaster mapping, Side Imaging and 360 Imaging.
“As the water cools and bass school up in the fall, they’ll begin to move from the main lake into creek arms. And you’ve got main lake fish on the flats adjacent to those creek arms. Both have one thing in common: they’re looking for lunch.”

Vahrenberg says it all comes down to surveying a lake quickly because fall bass can be here today, gone tomorrow. With two ONIX units at the dash – one set to full-screen Side Imaging, the other to Humminbird LakeMaster mapping – Vahrenberg is similarly on the prowl for baitfish and bass.

“I typically have my Side Imaging set to look 100 feet right and left. On a new lake I’ll increase that range to 130-150 feet until I find bait and ambush targets like trees, stumps, and submerged cover most anglers can’t see, especially in shallower stained water. Then I mark anything that looks like a good ambush site with a waypoint.” 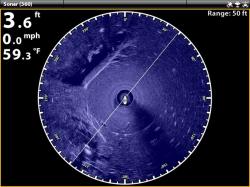 Humminbird 360 Imaging reveals the submerged tree in shallow, stained water that produced Vahrenberg’s bass (shown), only 25 feet from the boat.

He adds: “Seems like fall bass like flats close to a channel swing. They’ll move up from deeper water and push the bait into two-, three- or four feet of water and feed. With LakeMaster mapping you can find those spots where the channel swings in close to the bank. A lot of times your screen will be absolutely full of bait so I like to concentrate on those areas right before or after the giant wads of bait. Helps make the presence of your bait known.”

Once he’s located a channel swing, good cover, baitfish – even the bass themselves – Vahrenberg will jump from the console to the bow.

“As soon as I start pinging Bow 360 every waypoint will show up on my bow ONIX unit and I can motor right to ’em. Seems like if there’s a lot of cover, the fish tend to be isolated. Where there’s no cover, fish tend to group up in ‘wolf packs’. That’s where 360 Imaging really helps locating the stuff that you can’t see. The beauty is that it does all the work for you. You’re not controlling anything with your foot – all you have to do is look at the screen and think about where to cast next.” 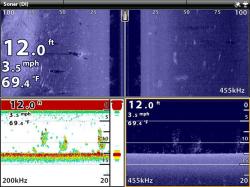 This ONIX split-screen reveals the presence of baitfish in Side Imaging, 2D Sonar and Down Imaging.

From fall through winter, Vahrenberg breaks down his presentations into two preferred categories.

“I always have one stick rigged up with a creature or jig and craw combo to flip the isolated fish on cover. Those fish will position right behind the timber, waiting for lunch to swim by. On lakes with less cover I’m fishing fast search baits to connect with the wolf packs – square bills, spinnerbaits, buzzbaits, lipless cranks – and searching out aggression bites. A shad pattern is always good but if there’s an overabundance of forage, I’ll switch over to a bluegill pattern, which is often just different enough to get bit. Look at it this way, if you’re eating a chicken breast every day and somebody offers you pizza …”

During winter, Vahrenberg reverses his fall routine and starts at the back of creek arms, moving outward to the first or second channel swing – or from the edge of the ice back to the main lake. “Even more so in the winter, bass will associate to the channel swings – and deeper water – but look along the edges. Again, LakeMaster mapping and the imaging technologies can really help you find the right stuff.”

In northern Minnesota, the open water season is typically over by Thanksgiving. Yet, by the time the turkey and cranberry are being passed around the table, ice fishing guide/tournament Brian “Bro” Brosdahl has much of his winter ice fishing strategy already mapped. Many years, he’s already fishing on hardwater by turkey day.

“Sure, I’ll drop waypoints on structures in the fall but what I really do is fast-forward my thinking to winter, knowing that walleyes and jumbo perch will associate to shoreline points, saddles, humps, and weed bed edges on flats during early ice,” says Brosdahl.

Like Vahrenberg’s Missouri bass, Brosdahl says the biggest reason early-ice fish associate to these areas – especially on larger bodies of water like Minnesota’s Mille Lacs, Winnibigoshish and Leech – is the presence of baitfish. “Walleyes and perch both gorge on shiners, although the bigger walleyes seem to prefer whitefish.”

Brosdahl says Humminbird Lakemaster mapping greatly reduces the time it takes him to “pre-fish” a lake in the fall for ice fishing in winter.

Brosdahl and the big jumbo perch pay-off of scouting with Humminbird LakeMaster and Side Imaging technologies. Photo by Bill Lindner.

“But you can’t just motor around in the fall, mark bait and fish and drop waypoints. Most of the fall fish will have moved by first-ice. So, what I do is highlight depths with Lakemaster’s Depth Highlight feature – typically somewhere between 12 and 14 feet on bigger lakes – and then start dropping waypoints on those areas that will be their next move after fall.”

“You still have to look for inside turns, saddles and especially those steep breaks for walleyes. But remember: If there are walleyes in the area, they’ll push the perch up onto adjacent flats and the gradual breaks.”

Brosdahl was one walleye fishing’s earliest adopters of Side Imaging. “Same time as I’m watching my LakeMaster map, I’m watching Side Imaging for hard- and soft bottom edges. Both walleyes and perch will ride those edges all winter long. With Side Imaging these spots are unmistakable. Plus, as more of your ‘A list’ spots like rock piles and sunken islands get winter fishing traffic, I find myself fishing hard-to-soft bottom transitions in places easily overlooked.”

Once a surveyor for LakeMaster himself, Brosdahl says mapping waters with Humminbird’s new AutoChart Pro software has been a lot of fun. “Of course, this time around I don’t have to share my findings with anyone!”

“Kind of cool that I can go to a lake that doesn’t have HD one-foot contours and really dial in on spots for winter. Plus, AutoChart Pro gives me bottom hardness mapping so I those hard-to-soft spots really jump out. And there are some tiny lakes that have never been mapped. That’s where AutoChart really shines.”

One pass of Humminbird 360 reveals more than 10 manmade crappie cribs in a single pass. Range set to 120 feet in every direction.

He adds: “Another thing: Internet connectivity – even phone reception – can be pretty spotty in the areas I fish. Pretty cool that you can create the map on a PC without having to connect to the web. Plus, I know my data’s kept private.”

A big part of their ongoing strategy is open-water scouting tournament grounds, like Mille Lacs’ Isle and Waukon bays.

“We’ve found Humminbird Side Imaging helps us identify the best weeds and hard-bottom areas. We’ll idle back and forth through a bay, looking 120 feet off each side of the boat. When we see holes in weed beds, inside turns and good bottom, we simply drop waypoints for winter. The way the system works is pretty easy – just pop the SD card out of the Humminbird 999 on the boat and drop it into the Humminbird 688 ice combo. Then it’s all right there,” says Fassbind.

Beyond marking waypoints on open-water, the duo has also experimented with Side Imaging on the ice. Using a pole-mounted Side Imaging transducer spun manually around in a hole in the ice, Fassbind and Smyers have had some success using the technology in a way it wasn’t intended.

“When we were fishing the NAIFC event on Lake Maxinkuckee, Indiana, we found a 20′ x 20′ patch of weeds with some logs, and Kevin pointed me in the direction and told me to start drilling. Boom, drilled one hole and I was on it,” says Smyers. “But it was difficult to get the image we wanted. Yet, we could see how this kind of technology could give us a huge on-ice advantage for locating manmade structures like cribs, Christmas tree piles, even fish.”

Along those lines, the duo is planning on implementing Humminbird Bow 360 into their tournament arsenal this year.

“What we were trying to do with Side Imaging is something that 360 Imaging already does better. With a little bit of rigging for ice, I really think it’s going to help us locate structure and fish even faster, which could be huge for main-basin crappies and deep-water perch. Punch a waypoint on fish and then go drill it. Instead of drilling hundreds of holes, we’ll be drilling a precise few. Not sure how much grid scouting we’ll be doing any more,” says Smyers.

Competitive ice angler Kevin Fassbind and teammate Nick Smyers use a combination of open-water and on-ice scouting with Humminbird technologies to stay on top of the leaderboard.

No matter where in the country you fish, the take-home message is clear: put in some time scouting with today’s technologies and you too can increase your odds for stellar fall and winter fishing.

About Johnson Outdoors Marine Electronics, Inc.
Johnson Outdoors Marine Electronics, Inc. is a wholly owned subsidiary of Johnson Outdoors and consists of the Humminbird®, Minn Kota® and Cannon® brands. Humminbird® is a leading global innovator and manufacturer of marine electronics products including fishfinders, multifunction displays, autopilots, ice flashers, and premium cartography products. Minn Kota® is the world’s leading manufacturer of electric trolling motors, as well as offers a complete line of shallow water anchors, battery chargers and marine accessories. Cannon® is the leader in controlled-depth fishing and includes a full line of downrigger products and accessories.