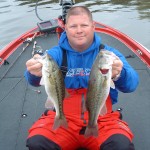 Nice spot and largemouth from Wedowee

Catching May Bass at Wedowee

May is an amazing month for bass fishermen.  Many big bass are hungry after the spawn and feed heavily. Some are still on the beds early in the month so you can sight fish if you like that. And males are guarding fry, making them aggressive and easy to catch.  This is a good month for catching lots of bass as well as landing one big enough to brag about.  You would be hard pressed to find a better May lake than Wedowee.

May bass fishing on Lake Wedowee is a pleasant surprise to many who have not tried it.  Limited access keeps big tournaments off the lake so it is not real crowded.  The lake is full of good sized spots that are very aggressive.  And you can catch some big largemouth if you target them.

The steep, rocky banks and clear water favor spotted bass and they are the predominate species on the lake.  Wedowee is not a real fertile lake so the Alabama DNR set a slot limit, requiring the release of all bass between 13 and 16 inches long to give that group of bass a chance to grow.  Spots became so common that they are no longer included in the slot and fishermen are encouraged to keep spots to eat. You are also encouraged to keep largemouth under the 13 inch limit to give more food for the bigger bass.

In the 2008 Bass Angler Information Team (BAIT) survey, Wedowee ranked first in angler success in club tournaments.  That means club anglers caught more bass per fisherman on Wedowee than any other lake in Alabama.  It ranked third in bass per angler day and a surprising fourth in the amount of time it took to catch a bass weighing over five pound.  So, you will catch a lot of bass and have an excellent chance at landing a five pound plus fish.

Due to all those factors, Wedowee was ranked as the best lake in Alabama for bass fishermen in 2008, and it seems to be getting better and better.  Plan a trip in May to take advantage of some excellent bass fishing.

Eric Morris loves bass fishing. Right now Eric is service manager of All Pro Auto Group in LaGrange. A few years ago he, his father and brother bought and now operate Wedowee Marina on Highway 431 right at the bridge on the Little Tallapoosa River.  They are taking on Legend Bass Boats this year and Eric is on the Legend Pro Staff. He is also sponsored by Falcon Rods.  He visits a wide variety of lakes and fishes more than 40 tournaments a year but Wedowee is his favorite lake.

Although he never fished a tournament until he was 25 years old, the first one his father took him to got him hooked to the point of addiction.  He loved it and now fishes tournaments every chance he gets. He has fished with a couple of bass clubs and now competes with the Harrelson Hawg Hunters bass club in Georgia, where he won the point standings two years. He also fishes every pot and charity tournament he can enter on Wedowee.

Eric has won four straight January club tournaments on the lake, but May is his favorite time to fish Wedowee.  He loves topwater fishing and it is excellent this month, and he catches some big fish on Spooks and Zell Pops all month long. And he can catch numbers of bass on a variety of baits.

We fished Wedowee on a rainy day the second week of April and some bass were already on the beds.  There should be a big wave of bass moving onto beds in late April around the full moon on the 28th, and some will bed even after that. So, for the next few weeks, you can catch bedding bass, a few pre spawn fish, and a lot of hungry post spawn bass.

An 8.5 pound largemouth is Eric’s best from Wedowee, and he has landed a 4.45 pound spot there. His best tournament catch on Wedowee was five bass weighing 21.36 pounds and, surprisingly, included three largemouth and two spots.  And that weigh gave him third place in the tournament. It often takes well over 20 pounds to win on Wedowee.

Largemouth are Eric’s target in tournaments since they get bigger and weigh more, but he may fish all day for five or six bites to win.  For fun catching lots of bass, Eric will go after spots, especially when taking kids and inexperienced fishermen out.  He separates the methods and areas of the lake to catch each although you can catch some bass of each species on either pattern.

For largemouth, Eric says fish the upper stretches of either the Tallapoosa or Little Tallapoosa Rivers.  There is a higher percentage of largemouth to spots up the rivers so you are more likely to catch them.  And Eric uses baits that bigger largemouth eat, like a full size Spook.

In late April and early May Eric will fish back in the pockets, looking for fish around the bedding areas. Any small pocket is likely to hold bedding bass on Wedowee since there are not many creeks for them to go to.  Work every inch of the bank with your Foxy Shad or chrome and blue Spook or a ghost pattern Zell Pop with a feather trailer since there is a lot of underwater wood you can’t see that will hold fish. Make repeated casts to wood you can see.

Early mornings are best for topwater baits but Eric will fish them any time there is low light.  If the day is overcast he will throw a Spook or popper all day long. On sunny days, anytime there is a patch of shade on the water he will work it with the topwater baits, too.

A spinnerbait is another good bait for big largemouth, especially during the shad spawn. Watch for shad on the rocky banks early in the morning and throw a double willow leaf bladed white spinnerbait right on the bank. If there is no activity, slow roll it from the bank back to the boat. Eric says he will reel four or five turns of his reel handle then stop the bait and start it moving again with a twitch of the bait to give it more action.

If the bite is slow and the largemouth sluggish, Eric will pull out a green pumpkin Senko and work it weightless around all wood cover in the pockets.  A big Senko works best and he lets if fall slowly by any cover he spots.

Watch your line carefully for any twitches as a bass inhales the bait, and tighten up your line very slowly before moving it. If you feel weight, set the hook. Bass will often take the Senko and not move, and the first thing you feel when you move it is them spitting it out!

The main lake below the Highway 48 Bridge is the area to fish for spotted bass.  The water is clear, most banks are rocky and it is ideal spot habitat.  A wide variety of baits will catch fish down the lake.

First thing in the morning a small topwater bait like the Zell Pop will draw strikes when cast close to rocky bluff banks.  The strike will usually come within two feet of the rocks, so get in close and make parallel casts to the rocks, keeping your bait it the strike zone longer.

A jig head worm is Eric’s “go-to” bait and he uses it to catch, in his words, a “whole lotta numbers” of spots on the lower lake. He fishes a one-eight ounce jig head on eight pound fluorocarbon line and puts a green pumpkin or Bama Bug color Trick worm on it.  He says the lower lake is full of rocky points that hold large numbers of spots.

The best points are flat points at the end of a bluff wall, where the vertical rocks change to a flatter, gravel and rock area.  Eric will sit out in the channel with his boat in 20 feet of water, but near the end of the bluff, and cast up onto the flat point, working his bait from the shallows out and down the drop.

Cast your jig head right against the bank and make sure it goes to the bottom. Eric says too many fishermen keep their line tight and that makes the bait swing away from the edge of the rocks, and many start moving the worm before it hits bottom. Eric says he makes sure the jig is on the bottom then starts moving it “a half-inch” at a time, shaking his rod tip to make the tail of the worm dance.

Bass will often hit as the bait falls, so be ready as soon as your jig hits the water.  And move the bait slowly. Some of these points drop off steeply and if you pull your bait too far it will drop right past the fish holding on the bottom.

Jig head worms are great baits to let a kid use to learn to catch bass. They will get a lot of bites on this bait fished on this pattern so they don’t lose interest, and they will catch some hard pulling fish.

If the wind is strong, making it difficult to fish a light jig head worm, Eric will throw a Carolina rig in the same areas.  Fish the same worm or a green pumpkin lizard on a three-foot leader behind a heavy enough sinker to keep your bait near the bottom.   He fishes Carolina rigs on 12 pound Segar Fluorocarbon line, his choice of brand of line for all his fishing.

Also ride the points on the lower lake and watch your depthfinder for brush piles. Eric says every point on the lake seems to have a man made brush pile. Look for them where you would make one and there is probably one there.  Back off them and fish them with the jig head worm or a Carolina rigged worm.  Brush from 15 to 20 feet deep will hold bass best, in Eric’s opinion.

By the middle of May night tournaments start on Wedowee and night time is a great time to catch fish there. Eric fishes as many of the night tournaments as he can, and enjoys the change from daytime fishing.  He says by early June the lake will be on fire at night, with lots of bass feeding in the dark.

Dock lights attract bait and bass in the dark and Eric will fish any lights he can find with a small light colored crankbait. He tries to match the shad swimming around the lights and works the edges of the light first, then under them in the brighter light.

Spinnerbaits work well at night when fished on the down-lake points, too. Eric surprised me when he said he uses a white spinnerbait with silver blades in the dark. He does use a black or sapphire blue trailer on his white spinnerbait.  Make long casts across the points and reel the bait back steadily to give the bass an easier target in the dark.

You can catch bass at night on the points and brush piles, too. Fish them like you do during the day, but fish even slower.  When you hit brush or a rock, jiggle your bait in one place longer to let the bass find it in the dark.

Wedowee is a great lake for catching bass right now and will just bet better and better over the next several weeks.  Give Eric’s patterns a try and see how he catches them. These tactics will work for you.