Using acoustic telemetry, researchers from the Ohio Department of Natural Resources (ODNR) and similar agencies across the region are tracking the movement of fish including Walleye, an important sport fish, to better understand how the fish travel throughout the lake during their life cycle.

In a contributing project funded by Ohio Sea Grant, ODNR researcher Dr. Chris Vandergoot is implanting acoustic trackers into Walleye spawning below a dam located in Ballville Township, just outside of Fremont, Ohio. The trackers in the fish, along with receivers placed throughout Lake Erie and neighboring lakes and streams, act much like the E-ZPass system in place on many U.S. turnpikes.

“Each of the receivers acts like a toll booth, and each fish with a transmitter in it is like a car,” Vandergoot said. “So when you drive by an E-ZPass station on the highway, it records what time you were there, and in which direction you were heading. When a fish swims by these receivers, the system basically does the same thing; it logs when a fish was swimming by that receiver.” 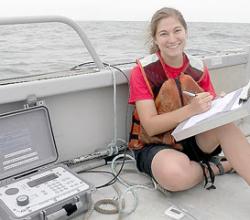 Students in Stone Lab’s Research Experience for Undergraduates (REU) Scholarship Program have worked with the Ohio Department of Natural Resources on tracking fish in Lake Erie for about six years. Many have gone on to present the research at conferences, or to jobs in similar fields.

When combined with data on each individual fish – they’re aged and sexed when the transmitters are implanted – researchers can determine where fish go between spawning seasons, whether they return to the same spawning location, and if they spawn every year or take “reproductive holidays” on occasion.

Receiver data is shared on the Great Lakes Acoustic Telemetry Observation System (GLATOS) website, along with general information about the research projects and instructions for anglers who find a transmitter tag in their catch.

“For the first time we can actually follow fish and see what they’re doing,” said Vandergoot. “We’re not relying upon anglers to turn in tags like we historically did.”

Of course, the researchers aren’t just digitally following fish around the lake for fun. “This is very cool science stuff, but at the end of the day this needs to be able to address management questions,” Vandergoot said.

Spawning site fidelity – whether fish return to their “home” stream or reef to spawn – is an important consideration when making management decisions concerning sport fish like Walleye in Lake Erie. For population modeling purposes, it is important for biologist to understand the origin of Lake Erie Walleye as well as where they go over the course of their lives.

Stone Lab REU students have participated in research related to GLATOS for about six years, examining everything from how to best anesthetize a fish for the transmitter implant surgery to how well fish survive after being released back into the lake or after the stress of a spawning season.

The REU program allows students to work one-on-one with professional Lake Erie scientists on an independent research project while taking a Stone Lab course. Selected students receive a full scholarship to Stone Lab, including room and board, and often go on to present their projects at academic conferences, giving them a head start on graduate school or science careers.

One of those students is Zach Steffensmeier, currently a junior in environmental science at Duquesne University in Pittsburgh. During the summer of 2015, he worked with Vandergoot on a Fisheries Management REU, analyzing transmitter data and assessing Walleye mortality during spawning seasons in 2013 and 2014. In addition, he was able to work with ODNR staff to collect receiver data in western Lake Erie.

“I heard about Stone Lab back in high school, and went for a weeklong aquatic biology class,” he said. “I just loved being out there, and when I was looking for a summer job this past year, I thought it would be great to go back there. I also really wanted to do research, so this was the best opportunity for me.”

In addition to gaining experience in hands-on research and delivering a scientific presentation, the REU also solidified Steffensmeier’s goal to work in the same field in the future.

“I want to do something with fish, that’s for sure,” he said. “I enjoy being outside in the field for fieldwork, so I’m definitely interested in being a fisheries biologist, whether that’s through the Ohio Department of Natural Resources, through EPA, or at a university as a professor.”

And with recommendation letters from Stone Lab and Ohio Department of Natural Resources staff, he’s well on his way to one of those careers.

“These projects are very large, and no one funding source can pull these off,” Vandergoot said. “But when you bring different collaborators together with all these different resources, we’re able to do amazing things.”

(From the January 2016 issue of Ohio Sea Grant eNewsletter. To subscribe, visit https://ohioseagrant.osu.edu/news/subscribe)