By Ted Pilgrim
from The Fishing Wirw

Which steak would you take? An unseasoned slab of meat, or the same steak slathered with juicy flavors just before slapping it onto a sizzling grill?

On this point, it appears, catfish and humans agree. Among those whiskery Ictalurids, scent and taste are powerful enticements. So it stands to reason why catfish often prefer their meals pre- seasoned and spiced, as opposed to bites of bland and flavorless flesh. 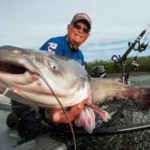 Whopper catfish like this one are easier to come by if you add “seasoning” like Scent Trail, which puts an added chum slick in the water.

At the recent Cabela’s King Kat national catfish tournament on the Missouri River near Jefferson City, elite catmen John Jamison and Mark Thompson registered a winning weight of blue catfish, employing creative bait methods not unlike those of master chefs.

The theory and practice of adding scent to baits is, of course, nearly as old as fishing itself. In the early days, anglers doused lures with such oddities as anise oil, Preparation-H and WD-40, plus volumes of fishy formulas meant to play on a gamefish’s olfactory abilities.

If you think bass, panfish and trout can smell well, consider catfish, the aquatic equivalent of a truffle-sniffing pig. For fish, the difference lies in “olfactory folds,” the mechanism used to detect underwater aromas. While a big adult largemouth has just thirteen of these structures, a small 2-pound catfish has 142.

Playing on this powerful sense, Jamison-a legendary figure on the national catfish tournament trail-has during the past year made some keen discoveries regarding the scent and taste preferences of goliath blues. “I’m not quite ready to discuss some of our findings,” Jamison admitted following his tournament win. “What I can tell you is at this last King Kat event, marinated baits worked almost like magic. Cutbaits soaked in Scent Trail were the only things we found that consistently triggered bites during the tough tournament conditions.”

At the major one-day event, Jamison and Thompson employed a variety of different baits, including filleted carp, shad and skipjack herring. But bait species itself, Jamison said, proved “almost irrelevant.”

Rather, to induce reluctant cats to grab their baits, the Kansas-based anglers placed pre-filleted fresh or fresh vacuum-sealed baitfish into Keep Kool bait containers and doused them with large volumes of Scent Trail attractant, effectually marinating them for an hour or more.

The spray bottle is an easy way to freshen baits that may be starting to wash out and loose their attractiveness.

Jamison added that local weather conditions turned what had been a torrid bite in prefishing into a test of patience during the event. “For years, we’ve sort of kept the scent-marinating deal under our hats. It’s pretty amazing how Scent Trail can invigorate and re-energize baits when catfish get fussy and hesitant about biting. Plenty of folks have seen us do it now in these tournaments, so we just figured it was time to share the secret with folks out there who fish for catfish in everyday situations. It’s going to help add lots of catfish to your stringer.”

A super-concentrated bait additive, Scent Trail has been manufactured by boutique catfish company Rippin Lips for the past several years. “The stuff is nothing but omega-3-rich natural fish oils, blood and amino acids,” Jamison notes. “These are the actual scent and taste compounds catfish hone in on to hunt food and eat; that’s it, no fancy fillers or extra ingredients.

“We use the product to recharge baits on our hooks. Every time we reel in, we’ll give our baits a few squirts of formula, which restores the bait’s natural juices.

“In tournaments, we’ll fillet a bunch of bait-size chunks ahead of time and stash them in the Keep Kool. If things get tough, we’ll sometimes pour in an entire bottle of Scent Trail. Really let the stuff soak in. Put one of these baits in the water and you’re setting up a mini chum line of flavor. You can’t believe how much difference this can make in a tough bite.

“It’s like setting the table at dinnertime. Put a bunch of delicious food out and let the aromas work their magic. Pretty soon, you’ve got people from all over the house gathered around the table, mouths watering. Now imagine if people had the powerful sniffers of catfish. You’d have flocks of folks arriving at your table from all across the neighborhood, ready to gobble up the food on your plate.”