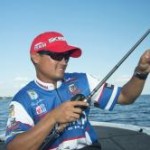 For second-year Bassmaster® Elite tournament angler Chris Zaldain, finding bass on lakes he’s never fished before involves a lot more than casting his favorite lure and hoping it lands in front of a hungry fish. The Yamaha Pro actually starts “fishing” a new tournament lake with hours of Internet research and map study weeks before he ever arrives at the water’s edge.

In the process, Zaldain, 28, formulates not only a Plan A on how he intends to fish during the competition, but also a backup Plan B, and sometimes even a Plan C. It’s a system that works, too; the California native has notched two top 10 finishes and collected a check in five of the first six Elite events of the 2013 season.

“The prior planning is definitely a major part of my preparation, and it’s been part of my bass fishing for years, but I’ll be the first to admit I still sometimes feel intimidated when I first look at some of the lakes we fish and see how big they are,” laughs Zaldain. “In California, most of our lakes are much, much smaller than what we fish in the Elite Series, so I make myself do more research than I’ve ever done before.”

Among the types of information the Yamaha Pro looks for are the results from past tournaments. The weight and size of the fish from those tournaments helps him determine seasonal patterns, as well as learn what to expect during his own tournament. Low weights, for instance, often indicate potentially tough fishing conditions, which in turn help him make certain lure choices.

“From the basic seasonal pattern, I study a lake map and try to pick one particular area of the lake where I’ll concentrate,” continues Zaldain. “I choose an area that embraces maybe 25 miles of the lake, and I want it to have as many different structure and cover options for the bass as possible. I want it to have rocks, wood, weeds, boat docks, points, coves, channels, and dropoffs, for example.

“The more options this area has, the more likely I will find them in that area and not have to run up and down the lake looking for them. I will spend my three official tournament practice days learning as much about that single area as possible.”

Zaldain’s Plan A evolves out of this practice; his Plan B is usually totally different and often based on a possible weather change that may occur during the tournament. This is exactly what happened to the Yamaha Pro during the May Elite tournament on Georgia’s West Point Lake.

“I’d never been on West Point before, but from my research as well as from my practice, I thought a swim bait would work well there, and it did the first day,” explains Zaldain, “but heavy rain and high wind the next day killed that bite.

Several times during practice, however, I had seen a lot of fish following my swim bait, and I thought I could also catch them with an extremely slow presentation with a plastic worm and light line.

“That became my Plan B, and while it was completely different from my original fishing plan, it worked and I was able to finish sixth. I always try to anticipate a change in bass behavior during a tournament week, and changing lures, often to a worm or jig, is usually part of that alternate plan.”

Zaldain likes to begin his practice fishing with a soft plastic swim bait, which he prefers over a spinnerbait as a search bait. The lure has its strongest action with a fast retrieve that allows him to cover a lot of water quickly. He believes it also offers another advantage in that few tournament pros use swim baits to help them locate bass so the fish don’t see many of them.

“Swim baits are part of my confidence package,” smiles the Yamaha Pro, “so they’re also part of Plan A whenever I can make them fit.”