A Cast to the Other Bass white bass

Overlooked and underappreciated, white bass are a blast

You’d be hard-pressed to find an avid angler who doesn’t recognize bass as the most sought-after sport fish in North America. We all have our favorite fish, but statistics prove that bass are #1.

Overlooked and underappreciated, however, is a bass of a different color. Its DNA differs from the most popular, yet the species roams a majority of waterways throughout the lands. I’m talkin’ white bass…. And they are a blast to catch.

Eight-year-old Mae Edlund is all smiles during the Mississippi River white bass blitz! An H20 Precision Jig and minnow or B Fish N Tackle Pulse-R is like candy to these voracious pelagics!

White bass fans look forward to massive spring spawning runs in rivers that connect to the large natural lakes and reservoirs the fish call home during the rest of the year. But after the run, most anglers set their sights on other species.

So why are they summer’s Rodney Dangerfield, earning such little respect?

It can’t be their unwillingness to whack a vibrating or flashing lure. The fact is, white bass have voracious appetites, and once schools are located, the catching comes quite easy.

It’s certainly not what they lack during battle. White bass zig-zag and power-dive straight for the fathoms. And, by far, it’s not their poor table fare. On the contrary, white bass make for good eats if you ice ‘em right away or keep them in a well-aerated livewell – and then remove all the red-colored flesh when filleted.

More than likely, it’s simply because they aren’t easy to find come summertime. Just like their saltwater cousins, the striped bass, white bass turn pelagic. They don’t dwell near bottom or hug shoreline structure, making them more difficult to find. Instead, white bass rove high in the water column and create havoc with pods of nomadic baitfish.

Or maybe they’re simply not trendy enough to target. But that’s about to change.

When the lovin’ is over

Enter ardent angler Jim Edlund, who is far from troubled to speak in favor of targeting white bass. The Minnesota-based outdoor writer says he fishes white bass every chance he gets, and now coaches his daughters on how to catch them year-round; even well after the massive spawning migrations have ended.

“Springtime is primetime, typically when water temps are in that 50 to 60 degree range. Fish a day or two before, on, or immediate after a full moon and you’re really rocking. That’s when the spawn is in full-swing. It’s the perfect bite to get kids really excited about fishing. Not surprising, my kids are big fans of white bass,” says Edlund

Although spring can be easy pickings, Edlund says good electronics can help you find white bass the rest of the year.

“Despite all the pretty pictures of bridges and sunken boats you see in the advertising, what Side Imaging really does is minimize the amount of time it takes to find fish,” says Edlund. “I simply idle around river points, sandbars, feeder creeks and watch for white splotches of bait and fish on my SI screen. Once I see life, I scroll the cursor over the spot and boom, there’s the waypoint on my LakeMaster map. This lets me back off and idle into the spot from upwind with my Minn Kota and get the kids casting without spooking them.”

“To think that a guy can get Side Imaging, Down Imaging, mapping and 2D sonar for under $500 is awesome. Fishing with the Humminbird Helix SI GPS is like drinking Don Perignon on a Boone’s Farm budget.”

As Edlund nears the waypoints he marked on Side Imaging, he switches to split-screen view of 2D sonar and LakeMaster map, noting the depth marks start appearing, more than likely the same depth white bass will move into if the wind kicks up and waves roll over sunken islands or points adjacent to the deeper water.

“I can’t tell you how many times I’ve stopped jigging walleyes on the Mississippi River to chase a school of white bass. I have buddies who just shake their heads. Then out comes the casting stick for as long as the whities will play along.

“Same goes for North Dakota’s Devils Lake. Take a break from walleyes and survey a few windswept shorelines with Side Imaging until we find fish; doesn’t take long. And they’re giants out there. They’re just too much fun to be ignored, especially with kids in the boat. My new plan is throwing Clousers at ‘em with a 4 or 5 weight fly rod. That should be a hoot!”

Overall, once white bass have spawned, they move out into the main lake and can be found in areas with a turbid layer over ultra-clear water. In reservoirs, both bait and bass are often found along the old river and creek channels. In natural lakes, white bass tend to hover over main-lake flats. It’s in these areas you may see baitfish leaping for their lives, indicating there are white bass below attacking the clan.

“Although electronics are great, always pay attention to what’s going on around you, like busting bait and surfacing fish. And watch where the birds are feeding on the water,” says Edlund.

Once it’s determined the bass are at the surface or just below, it’s time to cast into the chaos. 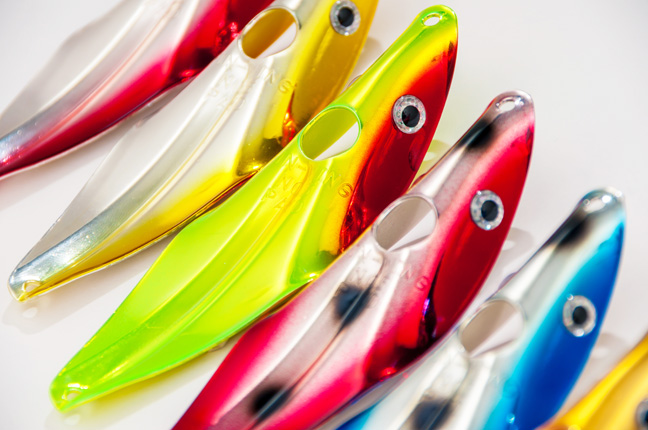 Fluttered deep or burned across the surface, the Fin-Wing is a nemesis to white bass

Lures and gear should be beefed up from what one might expect when catching fish that range from 1-4 pounds. Because white bass feed on shad and shiners, lures that match the size of the baitfish are best. Vibration and flash are key as well.

Soft jerkbaits with large paddle tails, such as 3.5-inch Castaic Jerky J Swim Series and Custom Jigs & Spins 3.25-inch Pulse-R Paddle Tail, rigged onto a jig head with a narrow shape like an H20 Precision Jig, or the Rapala Ultra-Light Rippin’ Rap are some of Edlund’s favorite baits to cast. He throws them with 10-pound-test superline and an 8-pound-test fluorocarbon leader on a fast-action medium-power St. Croix AVID-X spinning rod.

“I could use lighter gear, but I don’t like to baby ‘em. Plus, it’s a numbers thing; I want to boat the fish without any unnecessary ballet and get right back out to hot fish. Plus, these same river spots can produce some big ‘eyes, smallies, cats … when there’s a lot of bait getting slashed, your next fish could be anything,” says Edlund

Spinners are also a great choice for whities, with number-3 and -4 Mepps Aglia in-line spinners mainstays. Spoons with a wide wobble that can be fished both fast and slow and can be stopped and fluttered on the fall, such as a size-1 Fin-Wing or Custom Jigs & Spins Pro Series Slender Spoon, work wonders, too.

Overlooked and underappreciated? That’s the white bass. Once located high in the water column, catching them is straightforward – just cast, retrieve and repeat. Once you land a few you’ll realize just why white bass should rank right up there with black and brown bass. 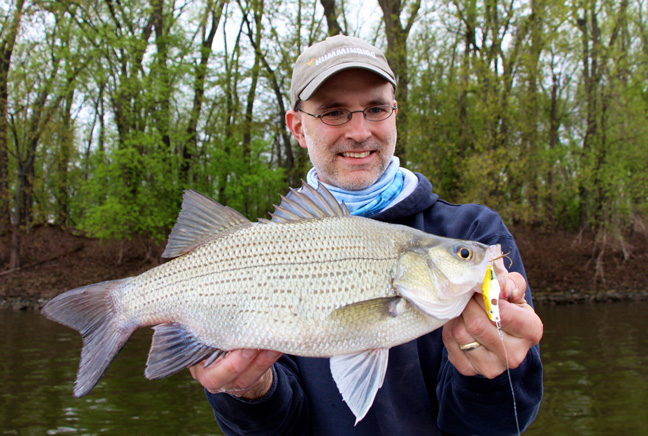 Mitch Eeagan is a writer that lives off the land and water, who resides in the heart of the mosquito-filled cedar swamps of Michigan’s Upper Peninsula.