By Frank Sargeant
from The Fishing Wire 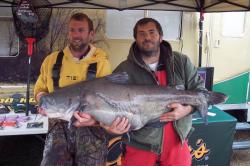 Big catfish from a TVA lake

While a lot of folks were still recovering from their hangovers on New Year’s Day, 76 boats headed out on a chilly Lake Wheeler in pursuit of the giant blue catfish of the Tennessee River system in the annual “Winter Blues” catfish tournament put on by the Alabama Catfish Trail.

Fishing for these catfish is a whole different ballgame from going out to land a few pan-size cats for dinner. Blues reach enormous size–the International Game Fish Association (IGFA) all-tackle record now stands at 143 pounds–and there are few places where the big ones are more abundant than in the lakes of North Alabama.

The current Alabama state record, 120 pounds, came from Holt Reservoir not far from Tuscaloosa, and the former record, 111 pounds, came from Wheeler. Blues reach lengths of almost 5 feet, and the largest have girths approaching 4 feet, according to the IGFA. Several blues over 200 pounds and one over 300 pounds were reported in newspapers of the 1800’s from the Missouri River, but whether these weights were anywhere near accurate is anybody’s guess.

Biggest catfish in the Winter Blues event was not record class, but Team Magness from Mississippi did manage a 72.58 pounder, the heaviest fish for the event. The team with the heaviest total weight for the event, Tammy Strouth and Brian Lawson, had a fish that went 68.69 pounder as part of their three-fish total bag of 168.9 pounds, while the second place team of Nick Diminio, Adam Long and Doug Jolly brought in a 69.58 pounder as part of a total bag of 151.9 pounds.

These fish can live at least 20 years, and don’t reach sexual maturity or spawning age until they’re 4 to 5 years old. Since they’re valued more as trophy fish than as food fish in the larger sizes, Alabama has placed a limit of one fish daily over 34 inches on the species. The idea is to allow more fish more time to grow into the lunker class. (All trophy-class fish caught in the Alabama Catfish Trail events are released.) 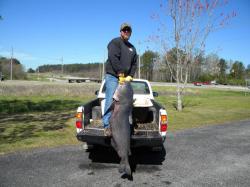 You can catch big cats

While the giants are most often found in the deepest holes in the river or directly below the dams in summer, in winter they spread out to feed on river points, shell beds and sandbars, and the big ones are evidently most active in the colder weather.

Blues eat just about any type of fish, but they seem to have a special preference for a herring-like baitfish called the skipjack, which is found naturally throughout the Tennessee River system. Most expert catfish anglers here prefer cut skipjack over gizzard shad or other bait. A chunk about 6 inches long is typically used to lure the larger fish.

The baits are usually fished on bottom, or just off bottom via a small float between a heavy egg sinker and the bait.

Most anglers use 40-pound tackle and up, with heavy spinning reels loaded with braid a favorite with some. Hooks are 8/0 or larger circle hooks, which are said to hook the fish without a hook set, and which make it easier to release the fish alive since they usually lodge in the front of the jaw.

Big cats are strong adversaries, and battles of 15 minutes and more are not uncommon with a lunker. However, the biggest problem most anglers face when the fish finally rolls at boatside is how to get it aboard–even the largest landing nets are likely to buckle under a 60-pounder.Gaffing would work, but since the fish are to be released alive, it’s not a good strategy. Some anglers who fish the giants regularly use two nets, placing one over the head, the other over the tail for a combined lift.