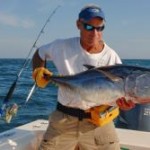 Bluefin Tuna are great to eat

Catching Tuna From A Small Boat
from The Fishing Wire

You don’t need a big sportfisherman to chase summer bluefin

Jigging up a bluefin tuna is super summertime sport, and fish this size can be handled without resorting to big game tackle.

Summertime presents an interesting fishing opportunity for outboard boat owners in the Mid-Atlantic region as schools of small-to-midsize bluefin tuna take up residence on the middle grounds. That means that boats incapable of making the run to the edge of the Continental Shelf and the many submarine canyons that attract yellowfin and bigeye tuna, have a shot at catching those species’ very substantial inshore cousins.

Bluefin are hard-fighting gamefish that can grow to four times the size of their next largest relative. These summer fish tend to weigh between 30 and 100 pounds with some as large as 250 pounds. They are truly big game, so be prepared for a fight if you’ve never caught one before.

Bluefin are highly regulated and therefore U.S. restrictions on seasons, sizes and bag limits must conform to the plan developed by the International Commission for the Conservation of Atlantic Tunas (ICCAT).

To fish for bluefin, you must have an Atlantic Highly Migratory Species Angling Permit, which is issued by the National Marine Fisheries Service (NMFS). You can purchase a permit online by going to https://hmspermits.noaa.gov/PermitList.asp, paying the $20 fee with a credit card, and then printing it out on your computer printer. The permit is for the boat, covers all anglers aboard and is good for the calendar year in which you purchase it. There are no individual angler permits required.

Lots of delicious steaks in hand–but only one per boat per day is permitted.

Since conservation of bluefin tuna is paramount at this time, commercial and recreational fishing is tightly controlled. On the recreational side, retention is strictly limited. Currently regulations stand at one fish per vessel per day, larger than 27 inches and smaller than 73 inches. The season is open until NMFS estimates that the quota has been reached, although that is not expected to occur until later in the year. With these restrictions in place, the fishery is overwhelmingly catch and release. The good news is that bluefin have an extremely low estimated release mortality rate, but care should always be taken when handling them.

The Yamaha crew joined Captain Jim Freda of Shore Catch Guide Service recently for a day of bluefin tuna fishing aboard his twin Yamaha-powered 28-foot Parker® Sportcabin. We left from Manasquan Inlet, N.J. in the dark for a slow ride to an area of lumps about 50 miles offshore, carefully watching the radar until the sky started to lighten with the rising sun. We arrived in an area where the water changed from a dull green to a clear, green/blue color, and the water temperature bumped up a few degrees. There were slicks throughout the area, oily calm spots amid the waves and chop, created by tuna and bluefish feeding on the schools of baitfish below. You could actually smell the fish, a pleasant watermelon type of aroma, when we got into the area. Tuna chicks, small dark colored sea birds that flit across the surface picking up pieces of baitfish that float to the surface, were present by the hundreds. These are things offshore fishermen call “signs of life” and when we stopped, the depthfinder lit up with massive schools of baitfish near the bottom in 180 feet of water.

The initial plan was to troll spreader bars, small plastic lures and cedar plugs, a very effective method of catching bluefin, and when we stopped Freda began prepping the boat by dropping the outriggers. While he was doing that, he instructed us to grab the jigging outfits and drop a variety of jigs to the bottom. As soon as the first one hit and was lifted and dropped a couple of times, the line came tight and we were into our first bluefin of the morning. It wasn’t a big one, but it fought hard, running line off the jigging outfit at will. Then a second one was hooked, and Jim put the outriggers back up and grabbed a jigging stick. The tuna’s response to the jigs was good enough that we never switched to trolling. The tally by morning’s end was nine tuna at 50 pounds, one 40-pounder on ice in the boat, and the rest released. Four of the bluefins released were tagged with ICCAT research tags, something Capt. Jim does on a voluntary basis.

Use a jig to catch bluefin tuna

Heavy jigs that look like slender sand eels are among the most effective jigging lures.

Jigging is an extremely effective method for summer bluefins, especially when the bait is low in the water column. We were over schools of sand eels, small thin-bodied fish that swarm by the millions and tend to hug the bottom, diving into the sand to escape predators. When the tuna are feeding deep, trolling near the surface is not very effective. However, dropping jigs to the basement puts you right in the middle of the action. It is loads of fun because the specialized rods and reels used for this fishing are small, light and make fighting tuna both fun and challenging. The reels are all packed with thin 50- or 65-pound test braided line so you can get the jigs deep and feel them easily. The jigs vary in weight so you can get to the bottom and stay there regardless of the current or drift speed. We were using 200-to-260 grain jigs made by a variety of manufacturers, letting them hit the bottom and then bouncing them up and down rhythmically.

When a tuna grabs one, the drill is to reel like crazy until the line comes tight and then set the hook hard. After that, you have to hold on because you are likely in for quite a ride.

Before you go offshore for bluefin, you should have your boat prepared. Your engines should be in top condition, fuel tank topped off, all your safety gear checked and easily accessible, and you should have more than just the basic emergency equipment. An EPIRB (emergency position indicating radio beacon) and a life raft are musts. There are valise-type rafts available for smaller boats that are easy to stow and deploy should an emergency arise. Take the use of PFDs very seriously, especially if the water is rough. Remember, you’re likely to be be a half hour away from rescue help by Coast Guard helicopter and two hours away by Coast Guard boat at the minimum.

When packing your gear, you should be prepared for three possible techniques: trolling, jigging and chunking. Trolling is usually the top producer earlier in the bluefin season when bait and tuna tend to be closer to the surface. Jigging comes on strong as the surface water warms and tuna do more feeding below the thermocline on baitfish like sand eels. Chunking can work from midseason through the fall. This technique usually requires anchoring the boat and using sardines cut into small pieces as chum and whole ones on your lines as hook baits.

You should also have a large enough supply of ice on board to cover a tuna that could run to well over 100 pounds in your fish box. Bluefin can spoil quickly if not properly cared for, and it would be a shame to ruin a delicacy because you didn’t plan ahead. When you get a retainable fish on board, it should be bled while alive. The next step is to collar the fish (remove the gills and organs inside the body cavity) and finally get it on ice, completely covered, until you get back to the dock to cut it into loins and steaks.

Of critical concern is picking a weather window for your trip. While many modern small outboard boats with twin engines are quite seaworthy and can easily handle moderate sea conditions, you have to take safety and passenger comfort into consideration. It’s not much fun getting thrown around a small boat in four-to-six foot seas. Make sure you hook up with the best marine forecasting services, and check them religiously before you make the call to head offshore.

What size boat can make the run to the bluefin grounds? You’d be surprised. During the day we had outboard powered boats fishing around us that varied from 23-to-38 feet with single, twin and triple engine applications. So if you’ve always wanted to catch a tuna and you’re up for running your boat a couple hours from shore, this is your chance.