How Anglers Can Help Snook and Reds in Florida’s Red Tide Areas
By Brett Fitzgerald, Snook and Gamefish Association
from the Fishing Wire 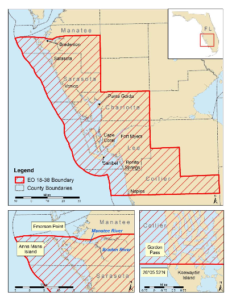 The Florida Fish and Wildlife Conservation Commission (FWC) has temporarily mandated that snook and red drum are ‘catch and release only’ in the areas most impacted by the 2018 red tide bloom. The closure runs from the northernmost point of Anna Maria Island in Manatee County, and runs along the coast down through Collier County to Gordon Pass.

The change of status to “catch and release only” is set to expire at midnight on Oct. 12, which will allow commissioners time to hear an update the next FWC Commission meeting, (September 26-27 in Havana/Tallahassee).

An executive order has not been used to shut down the harvest of any “fin-fishery” to harvest in Florida since the historic 2010 cold-kill, which had massive impacts on the snook population. (Scallop seasons have been closed or delayed due to red tide in the past, most recently in 2016 and 2017.)

Similar to the situation in 2010, FWC felt compelled to take action to protect these fisheries without the benefit of hard supporting science. In circumstances such as these, it is understandable that the decision was difficult, but made with the best intentions. “We have no idea how much these fisheries have been impacted,” said Jim Estes, Deputy Director of Marine Fisheries Management. “We did see issues with recruitment after the 2005 red tide bloom for certain species,” Estes added. This, combined with other factors such as interviews with stakeholders throughout Florida, prompted the temporary change of fishery status.

Back in 2010, snook anglers were called to action – FWC and their research arm the Florida Fish and Wildlife Research Institute (FWRI) worked with the Snook Foundation to develop a self-reporting system called the Angler Action Program, which led to the development of the iAngler smart phone app. “The information gathered by iAngler was very helpful after the 2010 cold event, and it played a significant role as the snook fishery recovered,” noted Dr. Luiz Barbieri, Program Administrator, Marine Fisheries Research at FWRI.

Once again, we are asking anglers to contribute valuable information through Angler Action. “I encourage anglers to report their catch in iAngler,” Jim Estes said. He has been a direct point of contact between FWC and Angler Action, and says this information can only help them understand the health of the fishery.

Over the next week, we at SGF/Angler Action will be working directly with FWC and FWRI staff to ensure that recreational anglers are dialed in. “Right now, our focus here is to help FWC get a handle on what is really going on with fish populations throughout Florida,” said SGF Chairman Mike Readling. “iAngler continues to be the best way anglers can communicate what they are catching – and not catching,” pointing out that ‘zero-catch’ trips are extremely valuable.

“We want to remind all anglers that using iAngler doesn’t mean that you must handle fish any more than a typical release,” Readling points out. Anglers do not need to include a photo with their report. While length information is very important, anglers can leave that box blank too.

For now, we ask that you stay tuned. Understand that the rule change means you CAN fish in the areas within the map above, you just must release any and all redfish and snook. If you are fishing anywhere in the state, these are our two asks of you: Log your trip in iAngler, and emphasize best-release practices.

Angler Action’s Best Practices for Catch & Release Fishing
Access to fisheries is an important part of conservation in America, and for many of us that access includes ‘catch and release’ fishing. In such cases, we want every fish we let go to survive so they can continue to thrive and contribute to the future of their species.

With that in mind, here’s a refresher on some pointers that will significantly increase the chance of survival of those fish you let to. If you wish to have something added to this list, let us know!

Try to keep the fish in the water at all times.
Minimize handling, since this can remove protective slime from the fish.
If you handle a fish, use clean, wet hands.
If you do remove the fish from the water, support the fish beneath the head and belly.
Minimize exposure to air, maximum 15 seconds.
Avoid using mechanical lip-gripping devices on active fish, since this can cause jaw injury.
If a fish’s weight is desired, attach a cradle to the scale to support the fish’s weight.
Keep fingers away from the gills, damaged gills make it harder for the fish to breathe.
Hooks

Use barbless hooks, since this reduces the amount of handling needed to remove the hook.
When fishing with bait, use circle hooks.
If a hook is deep within the throat, cut the line as close to the hook as possible.
This causes less damage than removing a deeply-set hook; most fish are able to reject the hook or the hook dissolves over time.
Fight Time

Keep the fight short, but not too short.
Long fight times result in an exhausted fish, which is more vulnerable to predators.
A fish reeled in too quickly may thrash about, increasing it’s chances of injury.
Use tackle that matches the fish and conditions.
If a fish looses equilibrium (it rolls over or goes nose down on the bottom), retrieve it until it can swim upright, then shorten the fight time on future fish.
When retrieving a fish, be sure that water passes over the gills from front to back.
Move the fish forward or hold it upright in the water allowing it to pump water through it’s gills.
High water temperatures may negatively impact survival after release for many species. In warmer water, reduce fight and handling time.
Predators

Since predators can decrease survival of fish after release, when predators become abundant and appear to become attracted to your fishing activity, consider moving to another fishing location.
If you have caught a fish and potential predators are near, consider using a circulating live-well to hold your fish for a short time to allow releasing it some distance away from them, unless that fish is not legal to possess.

Use AnglerAction.org or the iAngler phone app to record your catch info while fishing or soon after. (Remember to record all sizes and 0 catch as well).
If you are fishing in areas where the fish population is stressed, remember that you don’t need to photograph each fish in iAngler.
If you are unable to obtain an accurate length without excessive handling, it is better to leave that box empty. However, provided lengths are immensely helpful when using this data to better understand the health of a given fishery.