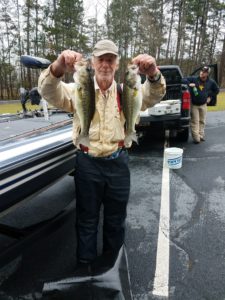 I came home in time to fish the Potato Creek Bassmasters March tournament at Oconee on Saturday, then went right back to Oconee the next day to fish the March Sportsman Club tournament. My results seem to tell me I did not learn much at the Classic about catching bass.

On Saturday, in the Potato Creek Tournament, 23 fishermen weighed in 46 14-inch keeper largemouth weighing 95 pounds. There was one limit of five fish weighed in.

Frank Anderson won with three weighing 9.59 pounds, Lee Hancock had the only limit and his five weighed 7.82 for second, Kwong Yu with three at 7.46 pounds was third and his 4.53 pounder was big fish and Jamie Beasley placed fourth with four weighing 7.19 pounds.

On Sunday in the Spalding County Sportsman Club tournament 19 members and guests and one and youth fished our tournament for eight hours. We landed 31 keepers weighing about 71 pounds. There was one limit and four of us zeroed.

Javin English blew us all away with five weighing 15.42 pounds for first, Billy Roberts had four weighing 7.68 for second, third was Niles Murray with three at 7.04 pounds and Russell Prevatt’s grandson, Craig Zoellner, fishing as a guest, placed fourth with two weighing 6.99 pounds, including big fish weighing 5.72 pounds.

Dan Dupree and I took off Saturday morning and went to the point where I had caught three keepers in the Flint River tournament the previous Sunday. I landed two keepers there on a crankbait. During the next few hours we caught some short fish but no keepers. At 1:00 I went to some deep brush piles and caught my third keeper on a Carolina Rig. That was it for us.

In the Sportsman Club tournament my day started wrong when I waited in Jackson for 15 minutes for a partner that did not show up. At blast off I ran to the point where I had been catching keepers but in over an hour of fishing it I landed only two short fish. One was 13.98 inches long – so close but no cigar.

I fished hard for the rest of the tournament and landed about ten more short fish, but no keepers. I guess I got all the goodie out of that point. It was very frustrating.