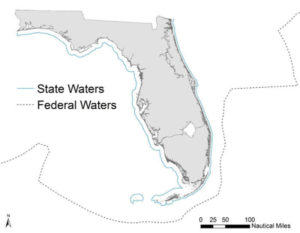 When you are on a boat, it’s hard to imagine boundaries. The sea is the sea. Wave after wave, it all looks the same. Above-water landmarks are few and far between. There are no signs that say, “now entering federal waters.”

Regulatory boundaries are sometimes hard to fathom. In Florida, one of the biggest fishery management boundaries is that between state waters, where the Florida Fish and Wildlife Conservation Commission (FWC) makes the regulations, and federal waters, which are mostly managed by federal fishery councils and NOAA Fisheries with input from FWC. Sometimes regulations are the same in both state and federal waters, but not always, which is why it is important to know there is a line, and where that line is.

Florida is the only state where that boundary shifts depending on which coast you are on. State waters in the Atlantic extend out to 3 nautical miles, while in the Gulf they extend out to 9 nautical miles. But why, as many people ask? How did this come to be?

State boundaries in open waters of the United States first began to be defined in the 1940s, mainly due to concerns about rights for oil beneath submerged lands.

Congress reacted by creating the Submerged Lands Act of 1953.

Florida immediately asserted their boundary went beyond 3 geographic miles before it achieved statehood in 1845 and that Congress approved its boundary when Florida was readmitted into the Union after the Civil War. The claim did not make it to the Supreme Court until 1960, where it was proven that Article I of Florida’s Constitution (1868), which was approved by Congress, described the boundary off Florida’s Gulf Coast as “three leagues from mainland.”

One nautical league is equal to 3 nautical miles, therefore the “three leagues from mainland” is equal to the 9 nautical miles we manage in the Gulf today. For fishery management purposes, federal waters extend from where state waters end out to about 200 nautical miles (less so in areas where our waters butt up against other country’s waters such as in the Caribbean). Federal waters are also known as the Exclusive Economic Zone or EEZ. For more on the history of this nation’s boundaries, visit NauticalCharts.NOAA.gov/data/us-maritime-limits-and-boundaries.html.

Another interesting tidbit comes from the creation of the 3-mile limit itself, which sources say stems from how far a cannon ball could reach when fired from land. It is also said that, due to the earth’s curvature, 3 nautical miles is how far it is to the horizon.(Of course, this depends on how high your eyes are above the water.)

For fisheries management, we’ve created many additional boundaries throughout the years. We have species-specific management zones for fish such as red drum, and FWC manages some species in both state and federal waters. We take into account many different aspects when creating these boundaries, including differences in fish populations, fishing practices and stakeholder needs.

There may not be signage, but it’s always important to know where you are. State/federal boundary lines are marked as the natural resource line on NOAA nautical charts and these lines are also preloaded on most marine GPS units.

Need a map? Check out our maps page at MyFWC.com/Marine by clicking on “Recreational Regulations” and “Fisheries Maps.”

Have a question about marine fisheries regulations? Want to know more about catch and release? Send your questions, photos and fishing tales to Saltwater@MyFWC.com. Make sure your photo meets our photo requirements by visiting MyFWC.com/Fishing and clicking on “Saltwater” and “Submit a Photograph” under “Get Involved.” Don’t forget to record all of your catches on the iAngler phone app or at www.snookfoundation.org/data.html. And learn how to submit your catches and get rewarded through our Saltwater Angler Recognition Programs at CatchaFloridaMemory.com.

The quarterly Gone Coastal column is one of many ways that the Florida Fish and Wildlife Conservation Commission (FWC) Division of Marine Fisheries Management is helping recreational anglers understand complex saltwater regulations and learn more about saltwater fishing opportunities and issues in Florida. We are also available to answer questions by phone or email anytime, and we would love the opportunity to share information through in-person presentations with recreational or commercial fishing organizations. To contact the FWC’s Regulatory Outreach subsection, call 850-487-0554 or email Saltwater@MyFWC.com.