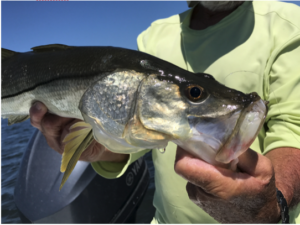 Snook are no longer on the menu starting May 11 and continuing for more than a year in Southwest Florida due to a shutdown by FWC. (Frank Sargeant Photo)
By Frank Sargeant, Editor
from The Fishing Wire

Florida’s Fish and Wildlife Conservation Commission (FWC) made a pre-emptive strike on restoration of inshore fish on the state’s southwest coast devastated by red tide–and shocked many anglers–by moving to shut down all harvest of the Big Three of Florida fishing, snook, redfish and spotted sea trout. The closure, which begins May 11 this year and continues until May 31 of 2020 as it now stands, will likely have a significant financial impact on guides, bait shops, fishing-oriented resorts and tackle and kayak and boat sales to say nothing of individual recreational anglers–but will be very good for the fish.

It won’t be the first time one of the state’s premiere fisheries has been shut down to allow recovery–in 2010 after a massive winter kill of snook, the commission shut down all take for almost three years.

Millions of adult fish were killed in the most recent red tide, which extended from November 2017 to early 2019, 15 horrendous months. Countless tens of millions more fry-size fish as well as the bait all gamefish feed on were also wiped out.

While some estuarine areas where the tide did not reach remain very good–or even better than before in a few places because the noxious water pushed fish off the coast and well up the bays to escape–others like Sarasota Bay, a narrow bay with three inlets direct to the beach, had a devastating complete kill. Beaches and residential canals were littered with tons of rotting fish, and spending a day on the beach became impossible–many beachfront hotels all but shuttered their doors as thousands canceled vacations.

Rotting fish not only wiped out anglers’ hopes but also decimated the beachfront resort business during the extended red tide. (Photo credit FWC)

The red tide finally dissipated as mysteriously as it came, in February this year. The state still has no cure and perhaps never will, though the new conservation-oriented Republican governor Ron DeSantis has appointed a commission and created a department to attack the problem along with blue green algae, a separate issue mostly affecting fresh water but also a major issue in the Indian River Lagoon near Jensen Beach in recent years. (Why there are not more Republican’s tapping into the conservationist/boater/angler/outdoorsman vote these days is a mystery well worth exploring.)

The closure will extend from the Pasco-Hernando county line near Tarpon Springs south (including all waters of Tampa Bay) through Gordon Pass in Collier County, just south of Naples.

The area traditionally has been the heart of snook country in Florida. Redfish and trout were already down when the red tide struck, some think from overharvest as a result of Florida’s booming population of inshore anglers, guides and kayak fishers. There have also been some water quality issues, particularly on Tampa Bay, where the city of St. Petersburg has had several massive sewage spills in recent years. (In general, though, 40 years of conservation efforts on the bay have brought steady improvement in clarity and consequently in the amount of sea grass, a mark of a healthy estuary–until the disastrous red tide struck.)

There’s no question that a complete shutdown will go a long way towards rapidly restoring these important fisheries–the extended snook closure of 2010 to 2013 produced the best snook fishing seen in decades immediately after, and the effect is still obvious, with anglers outside the red tide zones routinely catching and releasing 40 to 50 linesiders in a day when fishing with live sardines.

Restocking of juvenile fish may help kick start some areas, but research indicates the best solution for recovery is a healthy stock of natural spawners. (Photo credit FWC)

However, past efforts with limited stockings have shown very small returns relative to the cost–most released fingerlings wind up as chum for larger fish. Nature functioning the way it should is the best cure, by far, and shutting down the harvest to allow spawners to survive is the quickest way to recovery.

For those who enjoy eating fresh fish they’ve caught themselves, there are still plenty of targets; flounder and pompano from spring through fall, sheepshead and mangrove snapper–two of the best tasting fish in the sea–in cooler months. Off the beaches, there are Spanish and kings, and on the reefs adult mangrove snapper, yellowtail snapper, red and black grouper and of course red snapper, which seem to be doing exceptionally well these days as a result of very tight management for several years.

It’s going to be a trying year for many who depend on the inshore fishery for their livelihood. Though many guides have already gone to very limited harvest just to protect their own turf, a complete shutdown will surely cause some customers who would have chartered them to choose something else to do during their Florida visit, or perhaps to head to northwest Florida for a charter, where the fisheries remain open.

The good news is that barring another visit from Karenia brevis and related nasties, anglers are likely to see some exciting fishing when the closure comes to an end next year, and hopefully a strong year class of spawning fish may mean even better fishing ahead.