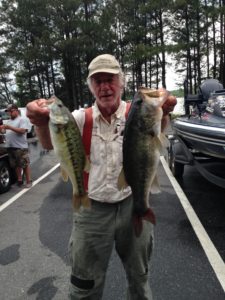 I went up and camped, practicing and fishing a Flint River Bass Club weekend before last and a Potato Creek Bassmasters tournament last weekend. The first day there, the day before the Flint River tournament, I spent all day fishing shallow, looking for the big largemouth that inhabit the lake but saw mostly turtles.

I did catch eight bass, all small male bass, on six different baits. I saw some big largemouth cruising the shallows but if I cast within 30 feet of them they took off, running from the bait even if it entered with barely a ripple! There was no pattern to where they were or what they would hit, not a good sign for the tournament. Saturday morning I went to a point where I caught bass last year this time, and in the first 30 minutes landed two six-pound hybrids and five keeper spotted bass, filling my limit.

All the spots were small so at 7:00 I went to shallow docks, trying to catch a kicker fish. After fishing docks for almost two hours with one bite, a short spot, I decided to fish one more dock then try something else. But a cast to it got a bite, and I landed a 5.08 pound largemouth.

It was a miracle fish. I had cast over a dock cable and the fish ran back under it. Normally the cable will cut your line when a fish pulls against it, but I managed to net the fish, unhook it then get my line back over the cable.

When I stopped shaking and put the fish in the live well I counted and had fished 31 docks. But the big one made me keep trying. After two more hours of casting to 30 more docks without a single bite I went back out on the main lake and caught more small spotted bass that did not help. With just an hour left to fish I caught three big spotted bass that culled three of the four remaining small fish I had caught first thing that morning.

The first day I led with 13.54 pounds. The second day I tried everything I could think of except shallow docks. I caught only a hybrid on the point where I had the limit the day before. I landed exactly five small spots weighing 6.41 pounds and dropped to second with 19.95 but my 5.08 was big fish. New member Gary Cronin won with ten at 20.07, Don Gober was third with nine weighing 14.60 and Brent Drake placed fourth with ten weighing 13.77.

I spent four days trying to find some pattern the next week but caught only two or three fish a day. I started Friday in the tournament on my favorite point but caught only a short fish. On shoal markers I managed to land 11 keepers, the best five weighing 9.77 pounds and putting me in first. But as the weekend before, on Saturday I could land only four small spots weighing 6.10 and dropped to fourth with nine weighing 15.52.

The lake was very crowded since there was a BFL tournament there Saturday and fishing was much tougher than it should be this time of year, even for them. It took only 14-14 to win it and 10-3 for tenth even though many of those guys are experts on Hartwell.