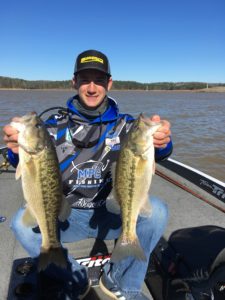 Carter with Allatoona largeamouth and spot

Bass are biting, if you do the right thing. A couple of trips in the past week proved my point that some people can catch bass, even on the worse possible conditions. On days I think they are just not biting because of one of my excuses for not catching fish, some are catching fish.

For years folks called Lake Allatoona “The Dead Sea!” After a trip a week ago, I won’t ever call it that again. I had a great trip with Carter Koza and his father Jamie Koza, owner of The Dugout, getting information for my February Georgia Outdoor News Magazine https://www.facebook.com/GeorgiaOutdoorNews/ Map of the Month article.

Carter caught nine keepers in half day fishing, from 7:30 to 12:30, including a two-pound largemouth and two spots about three pounds each. All hit a Spro Rock Crawler 50 on rocks, the pattern for the article. It was what I consider the worst weather conditions possible for catching fish, first day of a strong cold front. Bright sunny skies. Windy, but that is usually a good thing. The water was very stained, but Carter said that makes for the best winter fishing at Allatoona – cold muddy water is a good thing there!

Carter is a sophomore in high school. Younger fishermen like him amaze me with their skills and knowledge. Cater had a great mentor in his father, and he learned well. He explained patterns, what the bass were doing and eating, and why he chose the bait he used, as well as any pro. His knowledge is better than mine even though I have been tournament fishing for almost 50 years!!

I would like to fish Allatoona more often, but its location up I-75 north of Atlanta means ridiculous traffic, especially pulling a boat. I avoid going inside I-285 whenever possible. Traffic is bad on I-285, but there are fewer bad merging places. The absolutely worse place, unless there is a wreck, is coming south on I-75 where it merges with I-85. I hate pulling a boat through there anytime since you have to change several lanes fairly fast to avoid exit only lanes, and with thick traffic it is dangerous with a boat.