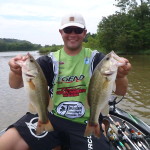 Wednesday I drove to Birmingham and met a young professional fisherman, Sambo Fish, to get information for an Alabama Outdoor News article. We pulled his boat to Demopolis Lake about 70 miles east of Birmingham. I am constantly amazed at the excellent fishing on so many Alabama lakes, even those not well known.

We started fishing shallow grassbeds and caught a few small fish and missed a lot more that hit a jig and pig flipped into the thickest part of the grass. That is fun fishing and you can catch some big fish.

We then went to a river ledge near the mouth of a creek and caught bass after bass on crankbaits, Carolina rigs and other baits. They were all about 14 inches long and fun to catch, but not the big bass we were looking for.

After checking out several more spots we stopped on another river ledge and the bass bit there, too, and were bigger. We caught several in the two to three pound range and he landed a four pound plus bass. Since it was getting later in the day and I had a five hour drive home, we left the fish feeding.

I wanted a picture of a spotted bass for the article and there are some big ones in the lake. We had caught a half dozen in the 13 inch range but they were not nearly as big as the largemouth. So he said he would take me to his “spot” hole where he always caught spots and caught some big ones.

As luck would have it we did catch a few small spots, but he caught seven or eight nice largemouth close to three pounds each. They hit a crankbait out from the rocks where he usually caught spotted bass. I told him he would have to change the name of this hole!

Demopolis is where the Tombigbee and Warrior Rivers come together. Like most river lakes in Alabama, it is narrow with coves and creeks filled with grass beds and wood cover. The river itself has ledges, the tops of the old river channel banks, that are now under water. Bass love both kinds of places.

Current on these lakes moves almost all day and that makes the bass feed better. When the lock at the dam was opened to let in a barge the current increased and the bass bit even better. It is an incredible kind of fishing.

Demopolis has some very nice campgrounds. There are many similar lakes, like Lay and Logan Martin. If you want to experience some great summer fishing, plan a trip to one of them.