Fishing and Grass: Not as Controversial as You’d Think
By Mike Reading
Angler Action Foundation
from the Fishing Wire 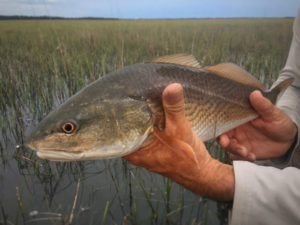 For most anglers grass means one thing: the long, skinny green stuff that grows in shallow waters. In fresh waters we often call it tape grass; in salt water we go with sea grass. In a healthy estuary, you are likely to encounter both if you are on the move.

One of the primary sources of habitat for estuarine fishing is grass. And Florida, to be sure, has lost scads of tape grass and seagrass around the state, from as far north as the Mosquito Lagoon to as far south as Florida Bay and the Everglades. When talking about all types of grasses, scientists refer to them as Submerged Aquatic Vegetation, or SAV.

And the loss of SAVis not just a Florida issue. It’s been estimated that we’re losing two football fields of SAV an hour world-wide, which equates to 7 percent a year.

Mountains of information have been written about the loss of habitat, who’s to blame and why. That debate will continue forever. But there’s one thing we can all agree upon. These grasses are important to fishermen and non-fishermen.
Here are a few reasons why:

Stability
Estuaries are vulnerable to erosion. Florida, if you recall, has been hit by two hurricanes during the past two years — Matthew in 2016 and Irma in 2017.

I got a first-hand introduction to both storms and the importance of how ecology works to benefit us. I lived on St. Augustine beach and the only thing that saved my house from Matthew’s flooding were the formidable dunes that were held together by sea oats. Not exactly submerged grass, I know, but the point about protection holds true.

A similar scenario evolved nearly a year later when Irma passed over North Florida. I currently live in High Springs, not far from the banks of the Santa Fe River, which has an abundance of grasses. The river sustained record flooding that washed away low-lying houses. However, the river bottom and surrounding remains largely intact, thanks to the meadows of eel and tape grass. After weeks of high water, the fishing returned to normal, proving that nature can indeed heal itself.

Habitat
Remember that big fish you caught? Maybe it was a bass? Maybe it was a redfish? Or a seatrout? Chances are, that fish used seagrass as a nursery for a couple years. A female redfish produces millions of eggs. Those eggs will become larvae and only a fraction of the larvae live long enough to become juveniles and those fish lucky enough to reach that stage head for the sanctuary of the seagrass, where they will use every nook and cranny for food and protection.

The standard length or a year-old redfish is a foot. And a fish that size will feed on crabs and shrimp and maybe a few small forage fish. A three-year old can weigh 6-8 pounds. The diet remains largely the same, and guess where you can find crabs, shrimp and forage fish? In the seagrass.

Food
Fish aren’t the only ones that use seagrass for food. Manatees, geese and turtles and other grazers feed off underwater vegetation. One acre of seagrass can support thousands of fish and millions of invertebrates. All are looking for their next meal.

According to the Smithsonian, a green sea turtle can eat as much as 4.5 pounds of seagrass a day. Other grazers don’t eat the leaves directly but nevertheless feed off them. Snails and worms, for instance, clean the grass by eating the algae, which generates seagrass growth and it serves as a form of protection from local urban runoff, which often produces algae.

Water Clarity
Underwater grass cleans the water by capturing sediments and particles which, without the filtering effect of SAVs would make sight fishing darned near impossible. Let’s take Tampa Bay, example. Because of the abundance of turtle grass and shoal grass in the Bay area, you can sight fish for reds year round. On the other side of the clarity equation is the Treasure Coast. Try finding clear enough water for reds near Stuart and Jupiter. Chances are, you won’t. The reason: Very little seagrass these days — or oyster beds for that matter.

SAVs also contribute our quality of life above the water’s surface by oxygenating the water column and storing carbon. According to EurekAlert, global coastal wetlands can capture and store 200 metric tons of carbon each year; one acre of seagrass is capable of harboring 740 pounds of carbon, attributes that can provide balance in the atmosphere.

To Sum Up
The beauty of fishing is that there’s always something to learn. Nature is a great teacher. We all want to catch more fish, and the best thing that an angler can do to reach that goal is to study the fish’s habitat. Learn it. Cherish it. Protect it. The future of fishing depends on it.

Editor’s note: Mike’s story about SAVs is Part 1 of a series that will highlight the importance of grasses, and lead into information about SGF’s $1million dollar SAV restoration project which has started in the Caloosahatchee River, where we are working with Sea & Shoreline and Johnson Engineering. Stay tuned!
Photo credits: Redfish image courtesy of Tim Boothe. All other images courtesy of FWC.

To learn more about the Angler Action Foundation, visit www.angleractionfoundation.com.