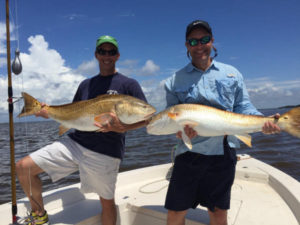 Friends Andy Ball and Brent Milgrom pose with two large red drum captures from their day at the Winyah jetties. NOTE: SCDNR biologists suggest leaving fish this large in the water for photos, or pulling them out for no more than 30 seconds and providing the proper horizontal support, as shown here. (Photo: Provided)

“We were down with five other friends on a reunion of sorts – South Mecklenburg High School class of 1985,” Ball said. During the trip, Georgetown Coastal Adventures’ Captain Dan Scarborough took Ball and his friends out to the Winyah Bay jetties to target large red drum.

The friends got what they came for – including a three-and-a-half-foot bull red that topped out at 30 pounds, which Ball reeled in after a challenging fight.

The fishermen could tell it had been caught before: a plastic yellow tag protruded from the spottail’s back.

Tags are thin, nylon cords that let biologists track fish and other marine animals. Each tag has a unique number identifying that fish and the SCDNR number to call and report recaptures. Since the 1970s, SCDNR biologists have operated a volunteer tagging program whereby recreational anglers can turn their fishing trips into valuable scientific information by tagging the fish they’re already catching and releasing. Using a specialized tagging device, researchers and volunteer anglers typically insert the tag into the muscle of a fish just by the dorsal fin. Harmless to the fish, the tags can remain anchored there for decades as the fish grows.

Andy Ball contacted SCDNR’s tagging coordinator, Morgan Hart, to report the tag number and details of the red drum he’d recaptured. Every time a tagged fish is reported, Hart sends detailed updates about the fish’s history to both the original taggers and the recapturers. It’s a neat way to see where a particular fish has traveled since you last saw it.

When Hart ran the fish’s history, she was amazed – it had first been tagged over 21 years prior.

“I could tell right away that the tag report was special,” Hart said. “The tag number was different than anything I had seen recaptured before. Once I realized how long ago it was tagged, I think my mouth literally fell open.”

“I reached out to the original tagger, Kevin Mischke, and he was delighted to hear that one of his fish was still contributing to the population,” Hart said.

James Islander Kevin Mischke, who first tagged fish ‘A033559,’ dug up this photo from the 1990s, when he regularly tagged spottails in Wappoo Cut. (Photo: Provided)

When Mischke caught it, the red drum was already a mature fish at 35 inches – meaning he/she is now likely to be well older than 21 years of age. SCDNR research has shown red drum are impressively long-lived fish, with biologists documenting fish up to 40 years old.

A decade later, redfish ‘A033559’ showed up once again in the records, when angler Warren Wood caught and measured the fish in 2008. By this time, the red drum had grown five inches and migrated to Georgetown, where Wood reported catching it off the Winyah Bay jetties.

And that’s exactly where Andy Ball caught the fish this summer – no larger this time, but another decade older.

Redfish By the Numbers

Over the past 25 years, South Carolina anglers in the tagging program have tagged ~61,000 red drum. Those fish have been recaptured nearly 10,000 times, with individual fish being reported as many as four times each.

“Seeing how many fish are recaptured in our state really shows how important it is to carefully handle any fish you catch and release,” tagging coordinator Morgan Hart said. “Since we can’t just look in the water and see how many fish there are, it’s easy to assume that there are an infinite number of fish available to catch – but our recapture rate shows that’s just not the case.”

How to Report a Tagged Fish

You don’t have to be a volunteer tagger to help – we count on anyone who fishes in South Carolina to report tagged fish they encounter. Your fishing trip could provide valuable scientific data that helps biologists studying how far and when fish migrate, how long they live, and how best to protect different species in South Carolina.

Tagged fish can be reported online or by calling (843) 953-9832. Be sure to write down the tag number, date, location, species, and size of the fish so that you can accurately report it later.