Are Fish Impacted by Hurricanes? 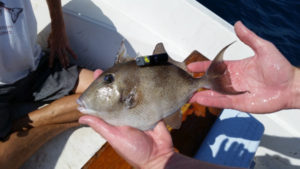 From NOAA Fisheries
from The Fishing Wire

Hurricanes can and do wreak havoc on coastal marine ecosystems. They destroy coral reefs, mix up the water column, redistribute bottom sediments, and increase pollution via storm-water runoff.

Hurricanes can also cause fish to evacuate nearshore estuaries and coastal ocean environments towards deeper water. Nobody has studied whether storms influence fish in deeper water, but most people think they are mostly immune from storm effects. 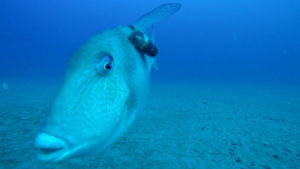 In a recently published paper in Scientific Reports, researchers at the Beaufort Laboratory of the Southeast Fisheries Science Center and a colleague at the Naval Postgraduate School show that fish occupying habitats as deep as 120 feet can also be strongly affected by hurricanes.

Researchers Nate Bacheler, Kyle Shertzer, Rob Cheshire, and Jamie MacMahan affixed transmitters to thirty gray triggerfish, a commercially and recreationally important oceanic fish species that associates with rocky reef habitats in the southeast United States. These fish were tracked in an area off North Carolina during September 2017 as two hurricanes, Jose and Maria, along the North Carolina coast.

What the researchers found was surprising, as each storm approached, most of the tracked gray triggerfish quickly evacuated the 120-foot deep study area in the direction of even deeper water, and those few fish that remained in the study area swam much faster than normal. After the passing of each storm, many of the tracked gray triggerfish returned to the study area within a couple of days and resumed normal swimming behavior.

Previous studies have indicated that falling barometric pressure, increased runoff, or a change in water temperature are primary cues that fish use to determine that storms are approaching. Here, gray triggerfish evacuated the study area 1–2 days in advance of hurricanes, long before any changes in barometric pressure or water temperature occurred. Instead, the researchers determined that, as surface waves increased in size from each approaching storm, energy from those large waves was transferred to the bottom, resulting in sloshing of water on the bottom. It appears as though the sloshing of bottom water, or the related fluctuating water pressure from sloshing, was the cue to which gray triggerfish responded. Only the waves from largest storms can transfer enough energy to cause sloshing in 120 feet deep of water.

We all know that storms can strongly influence the movements of organisms in estuaries and coastal oceans. This study shows that fish in deep, offshore oceans can be strongly affected by storms as well.