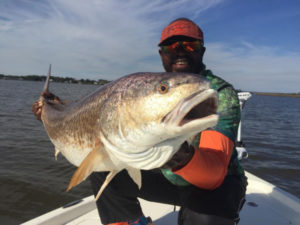 Catch redfish like this from the beach in the fall

For those who like to take their vacations on the Gulf Coast after the crowds are gone, now is the time to head south.

Though the weekends are still busy, the weekdays have a shadow of the numbers of vacationers pre-Labor Day, and that’s nothing but good for anglers.

Fall is prime time for redfish, which move from the beaches into the lower bays to spawn as fall nears. Particularly on the northern gulf, roughly from Cape San Blas all the way to Dauphin Island in Alabama, the fish show up in schools that sometimes number in the hundreds, literally turning the water red.

The “bull” reds—which are actually mostly females—settle on the edges of the bars, jetties, passes and bridges, and provide amazing sport for those who know where to find them. The average fish weighs 15 to 25 pounds, and some are much larger.

Harvest of any red over 28 inches long is illegal in Florida waters, while anglers are allowed one redfish over 26 inches daily in Alabama waters, but these jumbo reds are not nearly so tasty as the smaller fish and most anglers release them to spawn and make more reds. They make great catch and release action, and will hit just about anything when the feed is on.

Topwaters are particularly interesting because big reds really stir things up when several of them start chasing one of these lures at once. You may want to clip off several of the trebles, though—getting a big red untangled from a multi-hook lure it has swallowed can be a big problem. A single-hook swimbait works just as well and is much easier to get out of the fish—use one about 6 to 8 inches long and weighing 1 to 2 ounces.

The prime spot for big reds in Florida is the south tip of Cape San Blas, but they’re also found at every inlet and pass at this time of year, as well as cruising along just outside the first sandbar off the beach. They also linger around the many big piers found along the Panhandle coast.

The most famed spot in Alabama waters is Dixey Bar, a shallow ridge of sand just off Fort Morgan. This is a big piece of shoal water just off the edge of the ship channel, and it’s a natural feeding area, averaging 5 to 10 feet deep. It’s 3 miles long and up to 2 miles wide, providing lots of fishing room for a number of boats. And in fall it nearly always has plenty of jumbo reds.

While artificial lures are the most fun way to connect, sometimes a more sure way is natural bait— pinfish, grunts, small mullet, pretty much any fish in the 6 to 10 inch range won’t last long—put enough weight on them to hold bottom, and fish the outgoing tide. If live bait is hard to get, a chunk of cut mullet fished on bottom will do just fine—reds quickly home in on the scent, if a shark or catfish doesn’t beat them to it.

If reds are not your thing, trout fishing will quickly improve with the shorter days and cooler nights, with steady action around the shrimp and menhaden schools in the large bays and sounds here. Best bet is live shrimp under a big noisy popping cork which you “baloop” about twice a minute to attract attention. Some anglers catch much larger trout, big “yellow mouths” over 6 pounds, by wading the surf at dawn and throwing big Spooks and other topwaters.

Just off the beaches, Spanish and king mackerel will continue to cooperate until about mid-October, when the bait schools start to migrate south, taking these speedsters with them. Trolling a Clark spoon behind a number 2 planer gets the Spanish anywhere from 100 yards on out, while the kings usually like a larger Drone-type single hook spoon with a small strip of mullet or bonito, also fished on a planer. Kings hang around artificial reefs, navigation buoys and the major passes.

In short, there’s a lot of great fall fishing action waiting at the northern Gulf Coast right now, and it’s a great time to visit.