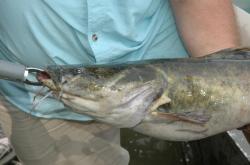 Catfish from the Ohio River

Ohio Division of Wildlife
from The Fishing Wire

The popularity of catfish angling has increased tremendously in recent years and the large sizes that catfishes can attain make them especially popular with anglers seeking trophy-sized fish. Trophy-sized catfishes can be found in many lakes, rivers, and reservoirs throughout Ohio, as evidenced by the state records for flathead catfish (76.5 pounds from, Clendening Lake) and channel catfish (37.6lbs from LaDue Reservoir). However, the Ohio River is the premier destination for Buckeye State catfish anglers pursuing some of Ohio’s biggest fish. The state record blue catfish (92lbs) was caught in the Markland Pool of the Ohio River in 2009. In recent years, however, anglers have reported decreasing catches of large flathead and blue catfishes in the Ohio River, particularly in the Markland and Meldahl pools.

Large Ohio River catfishes present some unique challenges for state agencies responsible for managing the fishery (Pennsylvania, Ohio, West Virginia, Kentucky, Indiana, and Illinois). The Ohio River is a massive system, spanning 981 miles and having 19 lock and dam complexes from its origin in Pittsburgh, Pennsylvania to the confluence with the Mississippi River at Cairo, Illinois. The size and complexity of the Ohio River makes it difficult for biologists to estimate how many large catfish are present and the sizes available for anglers. Also, fishing regulations vary among some Ohio River states for anglers and commercial fishers. In fact, Kentucky, Indiana, and Illinois permit the commercial harvest of Ohio River catfishes, but Ohio, West Virginia, and Pennsylvania do not. In addition, little is known about how commonly large catfishes move between Ohio River pools and between state jurisdictions and move into, or out of, the commercial harvest zone.

In 2014 the Ohio Division of Wildlife initiated a 5-year study with the goal of learning about the movements of large (>25″) catfishes in the Ohio River. Specifically, the study aims to determine how much these large fish travel between pools and how widely they wander within the river and its tributaries. Information for this study will be collected through angler reports and through the use of specialized telemetry equipment and results will help agencies along the river better manage the catfish fishery.

Large flathead and blue catfish will be marked with an external tag inserted near the dorsal spine and released back into the Ohio River. Each of these tags will be imprinted with a toll-free “1-800” number that anglers can call to report catching one of these fish. Catch reports should provide a location of where the fish was caught and the unique identification number on the tag. Anglers that report catching one of these fish will receive a reward (valued at $10-100 and will be entered into a drawing for a $1,000 cash prize at the end of the study. This information will be used to estimate the catch and harvest of large flathead and blue catfish by anglers and commercial fishers.

A subset of these tagged fish will also be implanted with a transmitter (picture) that emits an ultrasonic signal that can only be detected by specialized equipment, called hydrophones. Hydrophones are underwater microphones specifically designed to “listen” for these tags. Each time a hydrophone detects a signal from one of these transmitters, it records the date, time, and the identification number of the tag. So each time a fish with a transmitter swims by one of these hydrophones, we will know when that particular fish was in the vicinity of that hydrophone. Biologists will use the detection history for each fish to track the movements of these large catfish over the next few years. For example, when the same fish is repeatedly detected by a single receiver, we will know that it remained in that area over that time. Conversely, if the same fish is subsequently detected by a receiver in another area of the river, we will know that the fish was moving upstream or downstream at that time.

The Ohio Division of Wildlife, Kentucky Department of Fish and Wildlife Resources (KDFWR), West Virginia Division of Wildlife (WVDNR) and the United States Fish and Wildlife Service (USFWS) have been working together over the last year to deploy dozens of these hydrophones throughout the Ohio River and the primary tributaries to study movements of invasive Asian carp. This hydrophone “array” will also benefit this catfish research as well.

In addition to identifying the areas most frequently used by large catfishes and measuring their movements throughout the Ohio River, this study is anticipated to provide information on catch and harvest rates for these fish. This information will help biologist better understand the dynamics of large flathead and blue catfishes in the Ohio River and potentially identify the need for new strategies to more effectively manage these fishes.