Dave Precht to Retire at B.A.S.S.
By Frank Sargeant, Editor
from The Fishing Wire 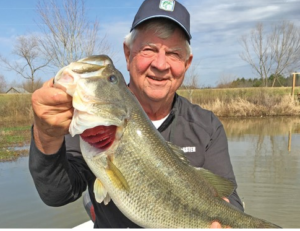 Dave Precht, who has pretty much been the face of B.A.S.S. publications for the last 41 years, will retire at the end of July.

Dave Joined B.A.S.S. in 1979 as editor of Southern Outdoors Magazine after a stint as the outdoors writer at the Houston Post. In 1984, he replaced Bob Cobb as editor of Bassmaster, a role he’d maintain for nearly two decades.

During his 19 years as Bassmaster editor, the magazine grew to nearly 600,000 member/subscribers and was selected as one of the 10 “hottest properties” among magazines in America by Ad Age. Precht used the magazine to promote boating safety, conservation, sportfishing ethics and bass fishing as a family activity.

As B.A.S.S. evolved, Dave’s knowledge of the sport, company and industry helped move the organization forward with focus and perspective. He retires as Vice President of Publications and Communications as the most longstanding member of the B.A.S.S. organization.

B.A.S.S. CEO Bruce Akin had kind words for Precht in announcing his retirement.

“We obviously know the incredible impact Dave has had on B.A.S.S., but his positive influence on the bass fishing industry has been celebrated, as well. He was inducted into the Bass Fishing Hall of Fame in 2011. And in 2018, Dave was inducted into the Freshwater Fishing Hall of Fame, as well as the Legends of the Outdoors Hall of Fame. Dave came to B.A.S.S. because of his passion for bass fishing, and now he will have plenty of time to spend on the water. The rest of his time will likely be spent chasing grandchildren,” Akin said.

On a personal note, it’s been my pleasure to have maintained both a professional and personal relationship with Dave for pretty much all of the years he has been with B.A.S.S., starting when I was a fledgling writer for Southern Outdoorsand continuing for several decades at Bassmaster before I began to focus more on saltwater than on bass fishing.

Dave is an avid angler both for bass and for saltwater species, and when he goes on vacation, fishing is often on the agenda—he and a crew head to the marsh country of the Louisiana Delta each year for a go at the reds, trout and cobia. During my time in Florida, he joined me occasionally for snook trips on Tampa Bay and Charlotte Harbor, trout and reds at Apalachicola and once on an epic sojourn that started in Key West chasing snapper and wound up at Lake Okeechobee cranking in largemouths. Dave is a great angler as well as a great friend—he’s given to starting at daybreak and staying out until the last glimmer of daylight, often the mark of those who become very good on the water.

Precht and his wife Linda live in Birmingham, and will remain there during retirement. They raised a successful, loving family. I started to say that was the icing on the cake, but in fact that is the cake, isn’t it? Birmingham puts them in the middle between grandkids to the north and the south.