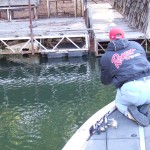 Shooting jigs under docks for crappie

Jim Pope tells us about a secret crappie fishing hole that sounds fantastic.

Crappie fishing is something that this fisherman never spent much time doing. Sure there have been times when a school of slabs were accidentally located while fishing for smallmouth with grubs. When that happens, it is hard not to try to put a few of the tasty critters in the livewell. There are some, however, who dedicate themselves to catching crappie. A cousin of mine is such a fisherman.

My cousin lives about twenty miles west of Nashville, and he has a fish camp near Kentucky Lake in the New Johnsonville area. That is as close as I can take you to his place, because his fishing area is classified. He gave me a little hard capsule to keep on my person at all times and made me promise to bite into it if someone tried to torture me into telling them about this spot.

In late October of 1997, I was fortunate to be able to get in a fishing trip with my crappie fishing cousin and another cousin who had come down from Wisconsin (there is another story related to Wisconsin fishing. When we got to his camp, the first thing on our list was to make sure that the batteries were charged to capacity. When we opened the garage doors, I was surprised to see three boats housed there. There was a fairly new 17′ aluminum bass boat with a 60 hp motor, a 12′ john boat with a 9.9, and a 14′ john boat painted and rigged for duck hunting. After I spent several minutes complimenting the bass boat, my cousin informed me that he usually fished out of the 12′ rig. The bass rig was really nice, and I wondered why he would make such a choice. that would be revealed the next day.

The following morning, we casually drank coffee and had breakfast. There seemed to be no rush in getting to the water. A massive cold front had just passed through, the temperature was about 40 degrees, and a northeast wind was blowing at twenty or so. I was in no hurry, because the warmth of the trailer and the coffee felt good. In all honesty, I had many unspoken negative thoughts about the day.

We were at the water’s edge around 9:00 that morning. A gravel/dirt ramp was available to launch the boat, and my first thought was that it would take a four wheel drive vehicle to master that task after all of the rain which had fallen in the past two days. As it turned out, the ramp was very solid, and launching the boat was accomplished with ease.

Most of my fishing is done on large lakes and rivers. The body of water on which were about to embark was slightly different. It appeared to be more of a swamp than it did a lake. My cousin told me that the average depth was about three feet. Actually, is probably much less than that, because there are acres upon acres of water less than a foot deep.

This lake is near, but not connected to Kentucky Lake. The only time they join is when the spring rains raise the river level sufficient enough to overflow into this body of water. The lake consist of several thousand acres of shallow flats with twisting creek channels fingering their way throughout. It is absolute filled with big buck bushes, most of which are in less than a foot of water. That is where the 12′ john boat comes in handy. The bushes we would target on this day were the ones which were located on the edges of the creek channels. Understand that the water in the creek channels is, at most, only three feet deep. Next to these channels, the buck bushes were in 15 to 20 inches of water.

My cousin assured us that the crappie would be nosed up to or inside of the buck bushes on this cold windy day. He also said that we probably would not catch many fish, but the ones we would catch would be good ones. I wondered how he knew that, so I asked. His answer could have been related to largemouth bass instead of crappie. According to my cousin, the crappie dive into heavy cover on days like this day. The big ones move in, and the little ones have to leave. That is the law of the water. OK. He didn’t use any scientific reasons, but he spoke with confidence. Suddenly my negative thoughts began to change.

With two buckets of two and three inch long shiners in the boat, we set out. These minnows seemed rather large for crappie, but I held back that question. Our tools were simple. We each had a ten foot telescoping crappie pole with a little butt-reel spooled with 40 lb. test mono. On the terminal end was a slip float, a split shot, and a 3/0 wire hook. A piece of rubber band was tied about 12 or 15 inches above the hook to act as a stop for the slip float. Without asking, I wondered why he would want to use such a heavy line and large hook to fish for crappie. That was another question in my mind which was later answered by observation.

We fished three or four buck bushes before my cousin got our first crappie. I was amazed at how he could drop his float and minnow down through the center of the bushes. He had done that in this particular bush, and I heard him say, “There’s one!”. He raised his pole straight up. The long pole took on a parabolic shape, and the fish struggled to stay in the maze of roots and limbs. After a few short seconds of grunting and pole bending, my cousin horsed the big crappie straight up through the thick limbs of the bush and swung it into the boat. This fish would have weighed two pounds!

Naturally, my cousin from Wisconsin and I were both excited about the size of the fish. My cousin calmly informed us that this fish was not such a big fish. He probably can be considered somewhat of an authority, since he has more than one crappie on his wall in the three pound range. According to him, the spring fish are larger, and it is the spring fish he likes to catch. I can see why!

My cousin had three good crappie in the box before I had the first bite. That was enough for me to begin trying to drop my float fig down into the middle of those bushes. By 1:00, we had ten or twelve fish in the cooler, all of which were big fish (from my point of view). We threw back a dozen or more in the 10 to 12 inch range (for some reason, they now looked to be really small).

I had also managed to land four largemouth bass, the largest of which was about three pounds. A larger bass had straightened my wire hook. Strangely enough, a gar, which had to be 30″ long, took one of my minnows. For a few seconds, that was a “line singing” experience. It didn’t take me long to understand why the poles were rigged with 40 lb. test line. First, the strength is needed to force a fish up through an entanglement of roots and limbs. Second, it is strong enough to pull loose from a snag. The heavy line can be wrapped around the hand and the wire hook straightened. Now it all makes sense.

That day of crappie fishing was an eye opener for me. It was a very relaxing day, even if the temperature was below the comfort zone. To say the least, I was impressed with my cousin’s ability to put us on the huge crappie. As he had predicted, they were few, but they were good ones.

This fisherman is now at the age of diversity. For years, those casting from the back deck of my boat had no choice but to fish for bass. The only exception to that rule was when the stripe (white bass) were surfacing or when I took my Dad catfishing. Now that I have somewhat mellowed, I have found that there is often much pleasure associated with diversity. There will certainly be another trip to the secret crappie grounds, but please don’t ask me where it is. I have too many good years of fishing left.