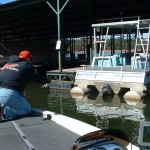 Crappie are among the most sought-after game fish by Alabama anglers.  They are widespread throughout the State, very abundant in many waters and excellent table fare.  However, even the most ardent anglers are often confused about the biology of these species.

First, there are two species of crappie, black and white.  Both species occur throughout the State but each prefers slightly different habitats.  The main difference is that white crappie are more tolerant of muddy water than black crappie.  Because of this, white crappie predominate in waters that are seasonally muddy (like the Alabama River and black crappie predominate in lakes that are usually clear (like Lake Martin.

Another aspect of coloration that leads to confusion is that during spring some crappie are very dark on the head and throat.  That is the breeding coloration of male crappie and occurs in both species in the spring.  Females do not exhibit that coloration.  Knowing this provides a useful fishing tip.  During spring, if you are catching crappie with the dark throat coloration, you are catching nesting males.  Take some time to look around for the females, which are often larger than the males.  They will be holding offshore, but nearby, at about the same depth as the nesting males.

Other aspects of crappie reproductive behavior should be of interest to anglers, since most crappie are caught in the spring.  Black and white crappie are members of the sunfish family, along with bass and bream.  In all species of this family, the males hollow out nests and guard the eggs and young fish.  Some species, like bream, construct their nests close together in large beds, while other species, such as bass, construct individual nests.  Crappie build their nests close together but usually in smaller groups than bream.  Crappie also nest earlier than other members of the sunfish family, generally when the water temperature is between 60o and 65oF.

There is a 9-inch minimum size limit on crappie in most Alabama public waters (10-inches in Weiss Lake).  This size limit was instituted in October 1993 and has been very well received by anglers.  In fact, many crappie anglers have asked why the size limit is not higher because, at about 10-inches crappie really start to put on weight.  When the size limit was established, the age and growth rates of crappie were taken into consideration.

Anglers cannot see how old a fish is, but Wildlife and Freshwater Fisheries Division biologists determine fish age on a regular basis.  In almost all Alabama waters, crappie reach nine inches by the time they are three years old.  However, in most waters 10-inch crappie are four years old.  Because crappie are not very long lived fish, it was deemed appropriate to allow their legal harvest at age three.  Any benefits of protecting them to age four would be offset by natural mortality.  In the few public waters where crappie fail to reach nine inches at age three, no minimum length limit has been established.  Therefore, the crappie size limit, as with any fish limit, is as much an age limit as a size limit.

Crappie fishing is a great way to introduce kids to the wonders of Alabama and share some unforgettable times together.  For more information on crappie fishing in your area contact any District Fisheries Office or come see us on the web at www.dcnr.state.al.us/agfd.

2 thoughts on “Crappie Fishing In Alabama”