By Jason Clay, Colorado Parks & Wildlife
from The Fishing Wire 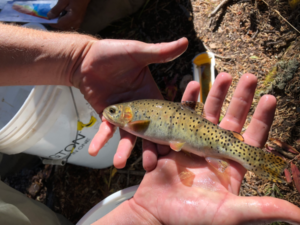 HERMAN GULCH, Colo. – Something fishy is taking place up at the headwaters of Clear Creek, and that is exactly what aquatic biologists for Colorado Parks and Wildlife were hoping to see when they went looking for the native greenback cutthroat trout.

The history of the greenbacks has been well documented – they have traversed through turbulent waters and were once thought to be extinct – but now CPW has evidence that Colorado’s state fish is making a successful return in its ancestral waters.

CPW aquatic biologist Boyd Wright and his team has been stocking greenbacks into the Clear Creek headwaters four miles above I-70 near the Eisenhower Tunnel for the past three years.

After a seemingly unsuccessful plant of 4,000 hatchlings in the Herman Gulch stream in 2016 – few had survived the winter – aquatic biologists persisted and their conservation efforts are now paying off.

“It has been a long road with lots of hard work by some really good and passionate people, but it is very gratifying to see these encouraging results for the greenback cutthroat trout,” Wright said on Thursday, Sept.13, following a population survey conducted at Herman Gulch.

“We’ve documented all of those cohorts of fish here today, which is good,” Wright said streamside sitting at roughly 11,500-feet underneath Pettingell Peak.

For the population survey, Wright and his team took three population samples on the stream, using electroshocking to capture the fish on the chosen 100-yard segments. After netting the fish, they were measured and weighed for documentation, as well as examined to see which planting group and year they came from.

Wright then took the results from the three samples and was able to calculate a population estimate. He found a 30 percent survival/retention rate of the of the 1,000 fish that were stocked at yearlings in 2017 and estimated the total population at 435 fish/mile.

“That may not sound all that well, but it is actually quite good,” Wright said. “We expect that not all of the fish will be able to survive and we set the stocking number accordingly, so I’m really happy to see that level of survival in the system.”

A 30 percent estimated retention rate on the one-year-old greenbacks that have been stocked into the system to date is extremely encouraging.

It could be the start of a massive success story for Colorado’s state fish that has boomed and busted over the past century. Wright is now bullish on the conservation effort for the greenback.

“The long-term goal of this project is to have a self-sustaining population of pure greenback cutthroat trout that doesn’t require any maintenance with stocking,” Wright said. “We are stocking it now to try to load the system up with fish and once we get to the point where we have reached a good density of fish in the system, we’ll stop stocking.”

The target for that is 2019, but in the meantime, Wright and his team are doubling down on their efforts. Two weeks after the population survey, they were back stocking more greenbacks into Herman Gulch.

To get that self-sustaining population, evidence of what biologists call “recruitment” needs to take place. The scientists need to see signs of the fish reproducing.

The first year to look for that evidence will be in 2019 when Wright predicts that the fish they have stocked will be reproductively mature. In 2020, they will be able to tell that the fish that are spawned in 2019 have been recruited into the population.

“I think by 2020 we will have a sense if this is working or not and everything that we know about this system so far, the fish that were here previously were a hybrid cutthroat and they did really well in this stream,” Wright said. “The water temperature is suitable for trout recruitment, we know that, and it’s a pretty productive stream for such a small stream. The expectation is that these fish will do well here.”