Bass Under Ice
from The Fishing Wire 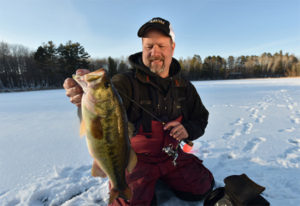 you can catch bass under ice

Crosslake, MN – A certain notion says bass don’t much care for the cold. That when winter arrives and seals lakes with ice, big green and brown bass skulk about, but certainly don’t care to bite.

Well, the actual truth is, a small group of exploratory anglers in Minnesota and Ontario have been quietly going about the business of bassin’ through augered holes in frozen lake surfaces. They’ve lipped plenty of largemouth and smallmouth bass. Big ones, too. But perhaps more importantly, the exploratory anglers have proved a few notions of their own, thanks largely to underwater optics documenting the antics of frigid water bass.

Mike Hehner, photographer and producer for Brainerd, Minnesota based Lindner Media Productions has been on the forefront of the hardwater bass movement. Hehner, as well as Ontario angler Aaron Wiebe, believe winter bass are worthy of more angling attention due to the species’ sporting qualities. But both anglers also beg for careful conservation, catch-and-release and selective harvest of small specimens only.

“Honestly, you can catch some of the biggest largemouths of the year right in the middle of winter,” says Hehner. “Winter bass can be pretty stacked up if you find them in the right places. They’ll feed relatively competitively, though they won’t strike as aggressively as they’ll hit say, a spinnerbait in summer.”

“Because winter bass like to hide and hunker down in cover just like they do in summer, I’ve always got my little handheld underwater camera—an Aqua-Vu micro Revolution—along for the ride. The camera shows fish in true-life color, while sonar can have a tough time picking up fish signals between aquatic plants.”

Debunking and perhaps confirming long-held conceptions in equal measure, Hehner reveals some of his more surprising underwater discoveries, and offers a few suggestions.

Winter bass usually feed best from midday until about an hour before sunset. “On camera, they’ll often sort of vanish from shallow vegetation areas as the sun begins to drop in the sky.”
Look for active largemouths around healthy pondweed, cabbage, elodea and mixtures of different plant varieties. “Bass often frequent these shallow zones to hunt small sunfish, so seeing sunnies or crappies on the camera screen can be a tip-off that bass are also present.”

Avoid water deeper than 20 feet. “Smallmouths, in particular, will especially seek out deeper winter locations, where they congregate and form massive schools. Pulling them out of deeper water causes barotrauma (rapid expansion of the swim bladder that creates hyper-buoyancy and an inability to remain submerged.)

Use the temperature gauge on the Aqua-Vu to find the most active bass. “We look for warmer 39- to 41-degree water under the ice, which often holds the biters.”
Immediately release all bass in extra cold temperatures (below about 20oF.) In lakes with ample populations of small and medium size bass, consider harvesting some fish less than 15-inches, while recycling all larger bass.

Best to find larger concentrations of shallow bass. “If I see just one or two bass in an area with the camera, I might not catch them. But if I find a concentration of five to ten fish, there’s a great chance bass will be competitive enough to bite.”

“One of the best baits is a live 3- to 5-inch shiner minnow tethered to a #1 wide gap hook. We’ve found it’s best to restrict the minnow’s movement by anchoring it slightly in place with split shot. If the minnow gets too wild, bass can lose interest and stop chasing.

Use the camera as a fish-attractor. “Lots of times we’ll see bass come right up to the camera. Occasionally, they’ll bite the camera head. If you don’t see bass around at first, leave the camera down there for a minute or so; any curious bass in the area will likely swim over to inspect it.”

Use the camera to sight fish. “This is what makes winter bass fishing so much fun. It’s incredible to watch bass chase, nip and bite your baits. Also, use it as a hookset gauge. If you’re using livebait, and the bass has the minnow in its mouth, set the hook immediately—don’t wait until the bait gets swallowed too deep.”

“It’s amazing that a fish with such a large mouth can pick tiny baits to pieces. We often see them nipping just the last ¼-inch of a minnow’s tail, or just barely mouth the head of a jig, without engulfing the hook. How do they do that?”

“Bass are a lot more active under the ice—all winter long—than most folks realize,” says Hehner. “Chasing them and getting them to bite is incredibly fun with an underwater camera. And you learn a ton. Winter days on most lakes—even with dozens of other anglers around— rarely is anyone else paying attention to what might be the best big fish game in town. Amazing.”