If you’re brave enough to get out on the water anywhere north of Florida this month, you may have a bit of Inuit in your ancestry–or perhaps you fished from an ice shanty. 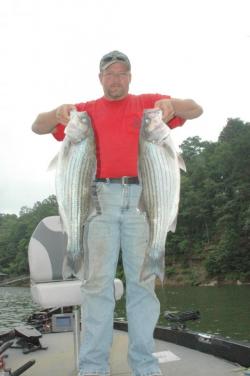 These landlocked stripers were caught next to bridge pilings in Lewis Smith Lake, an impoundment in North Alabama, an swimbaits. (Frank Sargeant photo)

Cold weather not only makes it almost impossible to endure sitting in a bass boat, it shocks the fish into a state that resembles suspended animation; they simply hang in the water near bottom, nose down, moving only enough to stay upright. They’ll come back to some semblance of normalcy after a few days of more temperate weather–but it will be the end of February before bassing returns to normal, even in Mid-South states like Tennessee and the Carolinas.

However, there are some species less affected by the cold. Top among them is striped bass, which actually thrive on cold water, and these may be the best target for the next month in many lakes around the country.

Stripers feed almost entirely on shad in open water and can be tough to find, but fortunately many lakes in winter have some “bird dogs” that make it easier. Sea gulls that winter from the Mason-Dixon Line southward keep a sharp eye out for shad being driven to the surface by stripers, and anywhere you see a flock of gulls diving–or even sitting on the water–it’s likely there are stripers below.

Striped bass are native to the TVA lakes that stretch across Tennessee, Alabama, Mississippi and Kentucky, but numbers were strongest when they were heavily stocked years ago. Now, most found here are native-spawned; the long flow-way of the TVA rivers allows the eggs to hatch in years when there’s good rain. Tennessee is also continuing to stock upstream TVA lakes, and some of these fish, as well as their eggs, arrive in North Alabama’s TVA lakes as a result.

Stripers can sometimes be located on sonar in winter hanging close to bait schools: Lower a heavy jig down to them and this can be the result. (Frank Sargeant photo)

Stripers, as distinguished from white bass, have a longer and more streamlined body shape, and grow to much larger sizes–over 50 pounds on occasion, and the world record for the landlocked strain, caught from the Black Warrior River last February, is a stunning 69 pounds, 9 ounces! Caught by James Bramlett, that 45.5 inch fish is unlikely ever to be bested; it appears to have lived in the warm water outflow of the Gorgas Steam Plant where it was able to stuff itself on swarms of shad and other baitfish prowling there to keep warm. It was built like a basketball with fins.

Stripers of 15 to 20 pounds are not that uncommon, and the average size is 7 to 10 pounds, big enough to give most freshwater anglers the fight of their lives.

Fishing live shad or shad-type lures under the sea gulls is one of the best ways to locate these fish in winter. You may have to visit several gull flocks before you find one with active stripers below, but running main channels near dams or in larger bays will eventually put you on the fish. A check of the sonar can confirm bait and stripers below–these large fish have a very obvious signature on the screen.

Stripers are great eating if cleaned properly, far better than largemouths, which most conservation-minded anglers release anyway these days.

Stripers have snow-white flesh that’s much like that of a saltwater grouper–just peel away the skin, cut out the red line and the rib cage and the boneless fillet is ready to be grilled, baked or broiled.

(A side-note–the largest stripers have higher concentrations of mercury than recommended for consumption, as with most long-lived fish. Those under 10 pounds have no issues in most lakes, however.)